An all-purpose weapon at Vista Murrieta High School in Murrieta, California, Shakir racked up 906 rushing yards, 243 receiving yards and 9 total TDs as a senior. The 4-star recruit opted for Boise State over scholarship offers from UCLA, Arizona and Colorado, among others.

Shakir played just 151 offensive snaps as a true freshman in 2018 but chipped in 240 total yards and a pair of scores. He missed the final few games of the season with a sprained knee.

He finished 3rd among Broncos WRs in snaps as a sophomore – behind John Hightower and Akilian Butler – but led the team in receptions (22.0% share). Shakir ranked 2nd to Hightower in receiving yards (23.8%) and TDs (19.4%).

Shakir played 66.9% of his snaps in the slot in 2018 and earned the 5th-best Pro Football Focus slot grade among 244 WRs with 20+ slot targets. His total PFF receiving grade ranked 16th among 290 qualifiers.

He played the majority of his snaps on the outside (60.5%) in 2020 but was more effective from the slot, where he averaged 3.52 yards per route. Shakir averaged a still-solid 3.11 yards per route outside the numbers.

He added a career-high 148 yards on 17 carries and was named First-Team All-Mountain West.

It’s worth noting that Shakir missed some time in the offseason after undergoing lower-body surgery and that he played under a new coaching staff in 2021.

We’re at the point of this process where there’s limited tape on most of these WRs. I was only able to watch 3 games of Shakir, so I won’t say that I have a complete understanding of his game.

It’s interesting, though, that Pro Football Focus charged Shakir with a 11.5% drop rate in 2021. Because, in the games I watched, he flashed some of the best hands in this WR class.

There were highlight-reel grabs.

And plenty of reps where Shakir plucked the ball away from his frame and had the strength to hang on through contact.

These were the 2 closest plays I saw to drops – but I’d argue that they were both tough grabs.

Shakir is at his best working crossers from the slot. He’s also adept at finding soft spots in zone coverage. He was used mostly on short and intermediate routes this past year, with a low 9.8-yard average depth of target, per Pro Football Focus.

There’s not much dynamism to Shakir’s game, though. I saw a lot of wasted motion without much impact in his routes or after the catch.

On this play, Shakir shakes, bakes and shakes some more but is unable to beat a LB one-on-one in the open field.

Boise used Shakir in the backfield on occasion, and he looks comfortable taking handoffs and jet sweeps. He does a nice job finding creases and getting upfield decisively.

Shakir had a nice college career, including a sophomore breakout and big junior season. His rushing production is also intriguing as we project to the NFL.

Shakir’s tape doesn’t excite, though. He’s not going to win with athleticism as a pro. I'm not sure he'll get the rushing opportunities in the NFL that he got in college. And he’s small. Besides checking in at a modest 6’0 and 196 pounds, Shakir has a 2nd percentile wingspan and 1st percentile arm length.

His best shot in the NFL will be in the slot. But there doesn’t appear to be much fantasy upside to mine here. 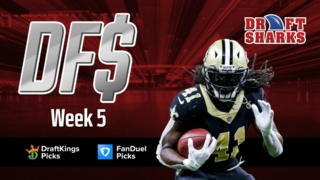 We get a stud RB back inside of a stellar scoring matchup. We have have a Bucs offense getting back to full strength. How should you play it in your cash and GPP contests?