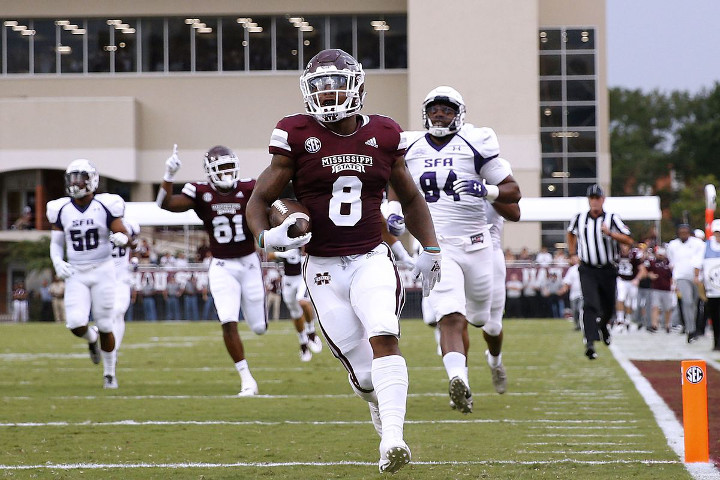 Hill arrived to Mississippi State as a 4-start recruit out of Columbus, Miss.

Hill led the team with 117 carries the following year, despite missing 2 games and sharing the backfield with senior RB Aeris Williams. Williams was also a 4-star recruit. He signed a UDFA deal with the Colts shortly after the 2019 draft.

Still, Hill was clearly viewed as the backfield leader. His 242 carries represented a strong 71% share of the team’s RB carries. Hill accounted for 18 of the team’s 25 RB catches (72%).

Playing under new HC Mike Leach in 2020, Hill’s stock dipped. And that’s mostly due to a lack of action. The 22-year-old made only 3 appearances, totaling just 15 carries. (Hill barely played in one game after departing following a helmet to helmet hit.) He did open eyes with 23 catches (15 at Kentucky; 8 at LSU).

Hill was suspended for one game before being deactivated for two because of “personal issues,” per Leach. Shortly thereafter, Hill skipped the rest of the 2020 season to prepare for the NFL draft.

"2020 has been an unprecedented year, filled with uncertainty due to a pandemic that has forced all of us to adapt as best as possible," Hill said in a November Instagram post. "With that, and after much prayer and discussion with my family, I have decided to opt out for the remainder of the season and declare for the 2021 NFL Draft. This has been an incredibly difficult decision, but one that I feel is best for me at this time.

Let’s see if he put enough on tape to forecast future fantasy value.

But it was enough to see what Hill’s main selling points are: power, burst and receiving ability.

Pro Football Focus charted Hill with 116 broken tackles on 453 career carries (1 every 3.9 carries). While not an apples to apples comparison, here’s some context: Mike Davis led all NFL RBs with a broken tackle every 7.9 attempts last year (min. 100 carries, via Pro Football Reference). It's an excellent mark.

Hill did well parlaying speed into power. He reminded me of a young Lamar Miller, minus the high-end long speed.

In an interview with Austin Gayle of the 2 for 1 Drafts podcast, Hill said he went through practice drills with the WRs in 2020. It showed on tape, especially against LSU, when he popped off for 8-158-1.

Hill didn't just leak out of the backfield for swings or option routes. Mississippi St. had him run downfield, too, as he even saw some snaps while lined up as a WR.

Hill showed up as a willing pass blocker. Ultimately, there was nothing in this 4-game sample to suggest he'll be a liability in the NFL.

NFL.com’s Lance Zierlein compares Hill to Peyton Barber. They might bring a similar power element, but I see Hill as a more dynamic back capable of ripping off chunk plays. Barber owns 6 career runs of 20+ yards on 645 carries. He averaged just 4.3 YPC coming out of Auburn. Hill, however, tallied 5.6 YPC on a greater college sample (452 carries vs. 248).

Of course, you can poke holes in his profile. Hill barely played in 2020 and enters the league as an older RB (23 in August). Still, his ability to catch the ball is really what's intriguing here. It can separate him from a lot of the mid-round RBs who simply don't have that ability.

While immediate opportunity is an extreme long-shot, Hill brings the modern-day skill set to eventually enter a backfield rotation. He's currently our RB8 in this class.