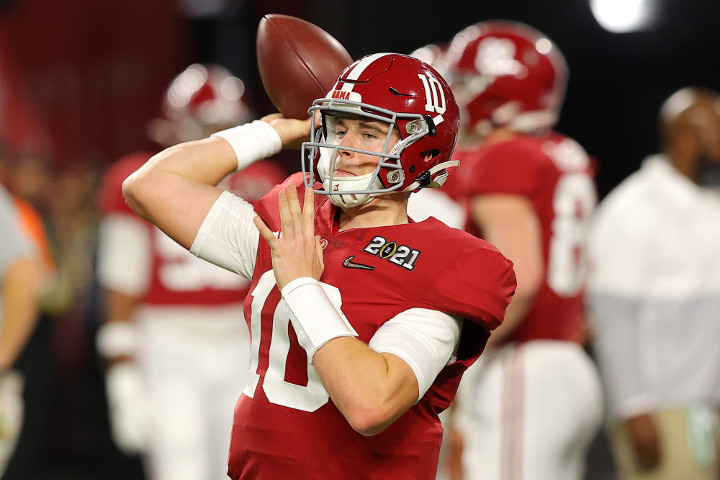 Jones arrived in Alabama alongside Tua Tagovailoa in 2017.

Then came the 2020 explosion. Putting together a legitimate Heisman campaign, Jones tallied 4,500 yards and 41 TDs on a nation-high 84.2% adjusted completion rate. He recorded 4 or 5 TD passes in 8 of 13 starts.

Jones showed a willingness to push the ball downfield, too, finishing with a CFB-leading 1,355 deep yards.

Now, most critiques of the 'Bama passer start with his supporting cast. He played alongside WRs Devonta Smith and Jaylen Waddle, a pair of top-15 talents. (Waddle, however, missed 7 of 13 games in 2020.) RB Najee Harris — a potential Round 1 pick — and an O-line with several pro prospects further set Jones up for success.

Finally, there’s Jones’ lack of mobility. While he’s not Eli Manning, Jones' athletic ability doesn't stack up against his peers (Trevor Lawrence, Zach Wilson, Justin Fields, Trey Lance). Jones navigated the pocket well in my review, but there were very few rollouts or off-script plays to be found.

At bottom: Jones looks like a classic pocket passer. Let’s get to the tape.

Jones was a master at orchestrating Alabama’s shotgun heavy offense. PFF graded him as the most accurate QB in the nation within 10 air yards. So he can make the layups.

Jones also showed that he can hit on downfield throws. And they weren’t always going to the team’s headliners (Smith/Waddle)…

Jones was truly special on deep balls, earning a PFF grade on such throws of 98.9 (95.8 overall, surpassing Trevor Lawrence's mark in each of his 3 seasons at Clemson).

Here's another in-stride deep pass with heat coming from the interior. This one might have been his best throw of the year. Overall, Jones' ability to make throws vs. pressure didn't appear to be a weakness on tape.

Jones showed the requisite arm strength to make it as an NFL starter. Below, you see his ability to drive the ball over the CB and to the outside with excellent ball placement.

Arkansas rushes only 4 in this next clip, but plays like these weren't exactly rare in the games I watched. Jones has all day to find an open target before firing a 25-yard missile. Alabama -- the reigning CFB champs -- fielded one of their best offenses in recent memory.

Finally, there's Jones' lack of escapability. There isn't a huge opening here, but a quicker-twitch athlete (like Lawrence, Wilson, Fields or Lance) likely squeaks through with a positive gain. Don't expect much rushing production at the next level.

Jones is a really tough evaluation.

From 30,000 feet, he looks like a strong prospect. His numbers are elite. And his arm strength, accuracy and decision-making all look pro-ready.

The case against Jones is clear. Zeroing in, we see an elite supporting cast that boosted his numbers and afforded a ton of easy completions. Jones also lacks the dynamic movement skills to become a difference-making runner. (Tua called Jones "a more mobile Tom Brady" on a recent Yahoo Sports podcast. Awesome.)

So his range of outcomes is capped a bit -- especially to the upside. Look at last year, and you'll see how 8 of the top-10 QBs reached 230 rushing yards. That crop averaged 5.1 TDs.

Ultimately, Jones will probably need a strong supporting cast to pop in fantasy. He's our QB5 in this rookie class. The largest projection-to-prop gap of the season lies inside, along with more player options than last week ... Mac Jones should be back. Damien Harris returns to interrupt your new relationship with Rhamondre Stevenson. But who should you play on the Monday Night Football DFS showdown slate?