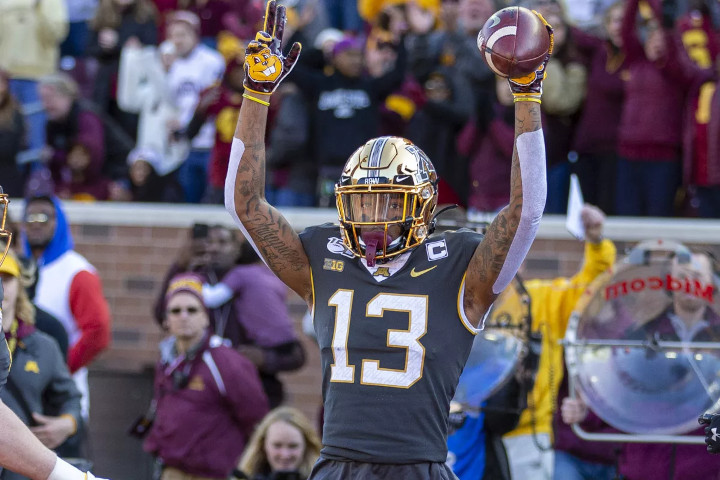 Bateman was tabbed a 4-star recruit by most scouting services coming out of Tift County High School in Georgia, where he posted a huge 83-1,539-21 line as a senior.

He carried that momentum right into 2018, turning in a rare true freshman breakout season. Bateman ranked 2nd on the Gophers to only then-junior Tyler Johnson in all major receiving categories. He accounted for 26.8% of the team’s catches, 25.9% of the receiving yards and 30% of the TDs.

Bateman also led the nation in yards per route run when lined up outside the numbers in 2019, according to Pro Football Focus. He was named First-Team All-Big 10, Big 10 receiver of the year and a Biletnikoff Award semifinalist.

He originally decided to opt out of the 2020 campaign due to COVID concerns before changing his mind and re-joining the team in late September. He played in 5 games before electing to sit out the remainder of the season.

Bateman doesn’t jump off the tape like a Ja’Marr Chase or a DeVonta Smith. But he excels at some of the finer points of the position.

His combination of releases and route-running ability is as strong as you’ll see from a college WR. Defenders struggle to get hands on him at the line of scrimmage. And his technique, change of direction and burst creates big separation on short and intermediate routes.

Because Bateman creates so much separation, we don’t get to see him in contested situations very often. But he certainly flashes plus ability in that department, thanks largely to a strong pair of mitts.

Bateman also brings some juice after the catch. He doesn’t have elite speed, but he has good initial burst to beat defenders’ angles. Pro Football Focus credited him with 36 broken tackles on 147 career catches.

Bateman is alignment versatile with experience both outside and in the slot. He played 87% of his snaps on the outside in 2019 -- and then played 61% in the slot this past season. He looks capable of winning from any position in the pros.

There are no holes in Bateman’s resume.

We’ll see if we get measurables at Minnesota’s Pro Day, but he certainly appears to have plenty of size and athleticism. (His agent claims he ran a 4.39-second 40-yard dash at the EXOS combine in late February.)

The production profile is awesome: a freshman-year breakout, a massive sophomore season alongside NFLer Tyler Johnson, and then a COVID-shortened but dominant 2020.

The tape shows a lethal route-runner in the short and intermediate game, plenty of after-catch ability and flashes of contested-catch skills.

Add it all up and Bateman looks like a safe bet for nice fantasy value. His ceiling might not extend as high as Ja’Marr Chase, DeVonta Smith or even Jaylen Waddle. But I like Bateman’s chances of emerging as a high-volume receiver as a pro. There are shades of Keenan Allen and even Davante Adams to his game. A questionable Mark Andrews adds a challenge to Thursday Night Football's 1-game DFS slate. But it might also present opportunity ...

Russell Wilson and the Broncos disappointed on the field in Week 1. But that just might help him make us money in Week 2.