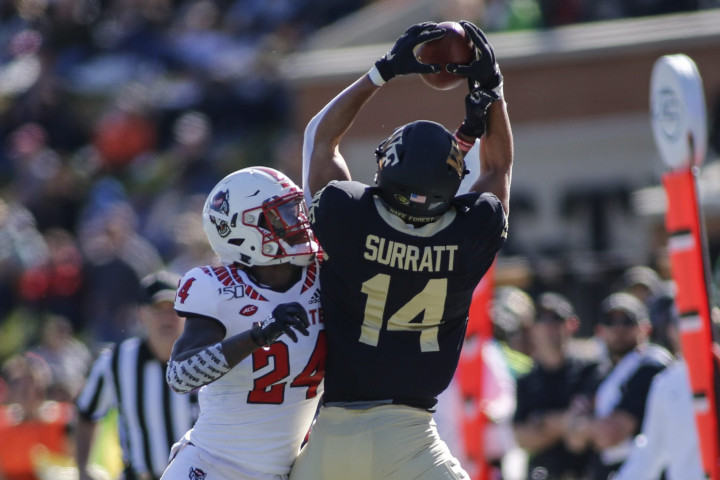 Surratt dominated on both the gridiron and hardwood at Lincolnton High School in North Carolina. As a senior, he averaged 35.7 points, 11.8 rebounds and 5.5 assists per game and racked up 129 receptions for 2,104 yards and 28 TDs. He was named the state’s player of the year in both football and basketball. Surratt was also a team captain and valedictorian. Slacker.

He was still tabbed just a 3-star recruit by most scouting services, though, and opted for Wake Forest over a handful of other offers, including from South Carolina, North Carolina and N.C. State. Surratt was redshirted in 2017.

He ranked 2nd on the 2018 Demon Deacons in catches and yards behind sophomore Greg Dortch, who went undrafted the following spring and has yet to record an NFL catch. Surratt’s 4 TDs ranked 3rd behind Dortch and senior Alex Bachman. The market shares: 16.6% of the receptions, 18.9% of the yards and 16.0% of the TDs.

With Dortch and Bachman out of the way, Surratt was 1 of the most productive receivers in the country in 2019. He averaged 7.3 catches, 111 yards and 1.2 TDs across 9 games. He scored in 6 straight to open the season and went over 150 yards 4 times.

His season ended prematurely, though, when he suffered a right shoulder injury vs. Virginia Tech that required surgery.

Surratt then elected to opt out of the 2020 season. He did accept his invitation to the Senior Bowl but finished that game without a catch.

Surratt is 6’3, 209 pounds and plays even bigger. He’s comfortable going over the middle of the field and making plays in traffic.

He knows how to use his big frame to box out defenders.

And he has the ball skills and body control to consistently win 50/50 balls. Pro Football Focus charted Surratt going 18 of 30 in contested catches in 2019 and called him the “best receiver in the class in contested situations.”

Surratt also plays big after the catch, running with plus power and contact balance. He broke 17 tackles on 65 catches in 2019, per Pro Football Focus.

Unfortunately, he also plays like a guy with 4.7 speed. Surratt is painfully slow trying to get downfield.

His lack of speed also makes it tougher for him to win on shorter routes because DBs aren’t afraid of getting beat deep. Surratt faced a lot of press coverage and often struggled to create separation.

(Surratt is highlighted at the top of the screen on this final play.)

Surratt reminds me a lot of former Stanford and current Eagle WR J.J. Arcega-Whiteside, who’s 1 of my biggest prospect misses. I fell in love with Arcega-Whiteside’s contested-catch ability -- but overlooked the fact that he had so many contested reps because he didn’t create separation.

It’s tough to survive like that in the NFL, where the DBs are bigger, stronger and play with better technique.

Surratt’s game is similar to Arcega-Whiteside’s. But he’s slower, with a 4.70-second 40 time vs. Arcega-Whiteside’s 4.49. In other words, don’t expect Surratt to win with separation as a pro. And I don’t think he’s big or athletic enough to consistently win in contested situations.

His best chance of success at the next level will probably be as a slot receiver, where his speed deficiency won’t be as big a problem. But I’m not sure he’ll be any team’s best option in the slot.

We’ll see where and when he goes in the NFL Draft. But I’m expecting him to be a day 3 pick -- and nothing more than a late-round flier in dynasty rookie drafts.