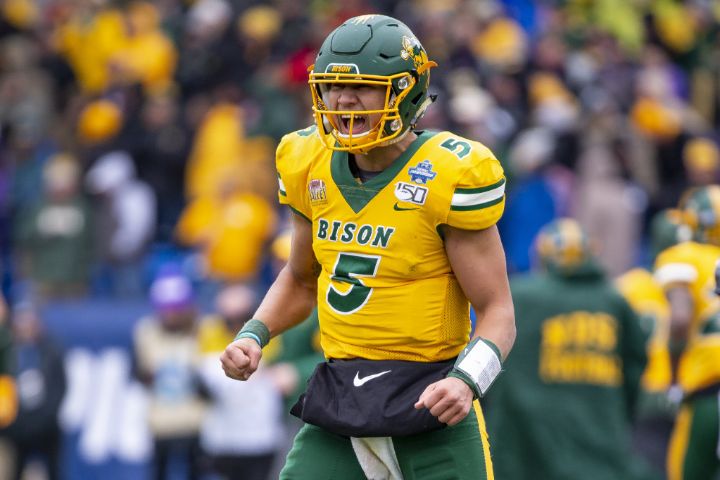 Lance threw at NDSU’s pro day but didn’t participate in the testing.

Attendees included GMs from the Jets, Washington, Broncos, Bears, Raiders, Seahawks and Vikings, as well as GM-coach tandems from the Falcons, Lions and Panthers.

The young QB spent just 1 season as a high school starter at the position, collecting a mere 1,097 yards and 10 TDs passing while running for another 512 yards and 7 TDs in a Wing-T offense. (He also started at safety.) Lance earned just a 3-star rating from 247Sports and 2 stars from Rivals as a recruit. 247Sports ranked him 49th nationally among dual-threat QBs.

Colleges paid similarly little attention. Lance wound up getting scholarship offers from only Boise State (late in the process), Northern Illinois and Air Force among FBS programs. Minnesota (his home state) reportedly scouted him as a safety, while another Big Ten school reportedly wanted Lance to play LB.

"He was sort of a late bloomer, size-wise, and that probably held back his recruiting," Marshall High School HC Terry Bahlmann said. "He graduated young. His recruiting would have been different if he was anything close to the size he is now."

Ultimately, Lance chose an NDSU program that has dominated FCS over the past decade. The Bison also sent each of its previous 2 QB starters into the NFL Draft: Carson Wentz in 2016 and then Easton Stick (5th round) in 2019.

Lance took a redshirt in 2018, with Stick playing out his senior year and 3rd season as the full-time starter. Then the new guy put on a show in 2019.

If you skipped over his terrific stat line above, then take a minute to go back and look. I’ll wait …

Yeah, that’s 28 TD passes vs. 0 INTs as he piloted the Bison to a 16-0 record and the FCS national title. It was college football’s first 16-0 campaign since 1894, and Lance set the NCAA all-division record for most pass attempts in a season without an INT. He also led NDSU in rushing attempts, rushing yards and rushing TDs.

Lance led FCS in passing efficiency, setting school single-season records in both that category and total offense. He won the Walter Payton Award (the FCS Heisman) and the Jerry Rice Award (top FCS freshman), becoming the 1st player to snag both.

Thanks largely to COVID, that would basically prove to be the end of his career. NDSU played just a single exhibition game in fall 2020, with the Missouri Valley Conference -- and FCS at large -- postponing its season to spring 2021.

Lance reached 200 yards passing in a game just 4 times. His rushing yardage (166) more than doubled his passing yardage (72) in the national-title win over James Madison -- a game that saw Lance run 30 times vs. just 10 pass attempts.

Let’s go ahead and start with what fantasy owners will love most about Lance.

While rushing for 1,100 yards in 2019, Lance lost only 83 to sacks or negative runs. Playing for FCS’ preeminent program at the moment undoubtedly helped. But Lance also doesn’t look like a fun guy to chase in the pocket.

That play marked a conversion on 3rd-and-16, where the QB clearly knew just how far he needed to get.

And watching NDSU in the red zone over these 5 games was like watching Josh Allen. If Lance wasn’t their lead goal-line back, then he was certainly a co-leader.

Lance isn’t just elusive and fast, but also a tough runner unafraid of contact. His NFL coaches will likely try to change that last part, but fantasy owners will welcome every time he plunges into the end zone.


Of course, it’s more than just his running that has Lance headed for a top-10 NFL Draft slot. The 20-year-old also boasts rare arm strength.

Lance looks willing and deft as a deep passer.

If anything, he sometimes puts a little too much on the long ball. Though that didn’t arise as a worrisome issue in the games I watched. I’d guess he’ll also generally work with faster wideouts at the next level (making it harder to overthrow them).

Lance’s arm also makes him a weapon on rollouts.

And it can help with NFL-type throws even when Lance isn’t looking deep.

I don’t have much in the way of negatives to share from my 5-game sample, which probably isn’t all that surprising given the 28-0 TD-INT ratio, big rushing numbers and perfect record. So let’s move on to the final section …

Whether you’re picking a QB in a dynasty rookie draft or in redraft, I think there’s a lot more value in chasing ceiling than worrying about floor. That’s what makes Trey Lance such an intriguing fantasy prospect. The numbers alone from his 2019 campaign display the upside, and the film backs it up. Lance heads to the NFL with a Patrick Mahomes-type skill set.

What he lacks, of course, is experience. Is that a bad thing? We’ll see.

He certainly won’t be unprecedented as a 1st-rounder low on experience. Carson Wentz started 23 games over his final 2 NDSU seasons and drew experience questions before landing 2nd overall in the 2016 draft. And according to ESPN, 6 QBs since 2006 have been drafted in Round 1 after fewer than 20 college starts:

That’s a pretty good list to illustrate the range of potential outcomes here. Newton has had a terrific career. Murray looks like he’s headed down the right path. Tannehill has been OK overall (though much better with his 2nd team). Sanchez, Trubisky and Haskins have all busted vs. expectations.

We’ve obviously also seen plenty of QBs with more college experience bust in the pros for varying reasons. The question with Lance is just what we don’t know yet.

"Trey's really raw, and he has a lot of raw potential," former NDSU WR Jimmy Kepouros said. "I definitely think he could be even more than he even is right now.”

He certainly could. Lance won’t even be 21 yet when some team drafts him in April. But reaching that ceiling will depend at least in part on whether he lands in a good environment for growth. Coming in raw also means there’s downside.

Jordan Love crushed 2018, his first full starting season for Utah State. Then he disappointed in 2019 vs. the bar he had set the previous year and nearly fell out of Round 1.

Justin Herbert spent 4 years starting at Oregon. He left with a bevy of school records, but 4 years worth of games also gave evaluators a lot of nits to pick.

Perhaps Lance would have endured a Love-type slump in his 2nd starting year. Or maybe he would have gone on to become Andrew Luck.

That’s who NFL Network’s Daniel Jeremiah compared him to last offseason: “They are similar athletes, and they both played with a maturity beyond their age at the collegiate level. They are fearless but they avoid being reckless.”

Jeremiah’s colleague Bucky Brooks said Lance “reminds me a lot of Deshaun Watson with his style of play.”

An anonymous NFL QBs coach told Bleacher Report last fall: "He's QB1 for me. He's everything you want in terms of arm talent, mobility and awareness."

In the same article, an NFL scout said: "He's clearly talented and has good arm talent. But I look at the postseason last year, and they weren't leaning on his arm. He threw 10 passes in the national title game. You're going to pick him in the first 10 or 15 picks after he has played one season? If you take him, you're going to need to develop him. He's not a guy you play right away."

Lance’s upside is exciting, both for real-life and fantasy purposes. And you really don’t need to worry about the bust potential. We can buy on the rushing ability and overall ceiling, and then still be OK if things don’t work out for Lance in the pros.

Our big question will be sorting him among the top 4. I already posted reports on Justin Fields and Trevor Lawrence, and I’ll take them both over Lance. Each of those guys is also a tremendous dual threat with a high fantasy ceiling. Each is also more polished and proven vs. higher-level competition.

I’d take Lance over Zach Wilson right now, though, as the higher-ceiling athlete. And the run-pass combo of each player puts that quartet well ahead of the rest of the 2021 QBs.

Are Amon-Ra St. Brown and his QB too good to pass on in the NFL Week 14 DFS main slate?

Can some things we learned last week help us fare even better with NFL Week 14 player prop picks?