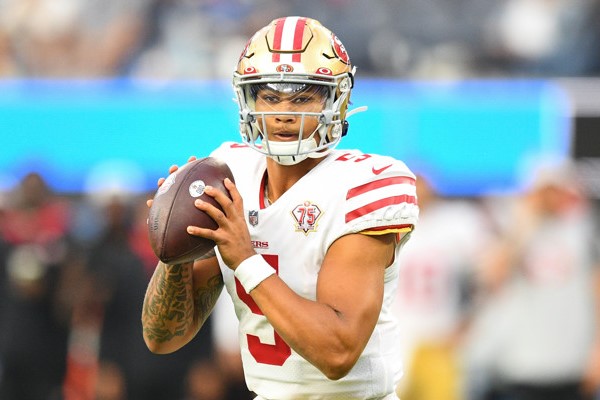 Lance made just 2 starts as a rookie last year, finishing QB20 and then QB10. He was OK as a passer but boosted his fantasy value with 24 carries for 120 yards.

Lance should carry spot-start fantasy value thanks to the rushing alone. And if everything clicks, there’s a top-5 ceiling.

NFL Network's Peter Schrager is hearing from 49ers players that QB Trey Lance has been "awesome this offseason." Reports on Lance's progress were lukewarm at best early this offseason, but it sounds like he's building momentum. "Everything I'm hearing out of the Bay Area is that there has been major strides heading into year number two. Jimmy [Garoppolo]'s not there, and he's kind of been off the radar. Trey Lance is [there]. I'm getting more and more of a feeling this is Trey Lance's team, and he's ready to go." With elite rushing ability and a strong group of pass-catchers in Deebo Samuel, Brandon Aiyuk and George Kittle, Lance carries a lofty fantasy ceiling in 2022.

Niners TE George Kittle said this week that QB Trey Lance appears to be taking over the offense. “I definitely think he’s taken ownership, for sure,” Kittle said, via Eric Branch of the San Francisco Chronicle. “You can kind of tell that in meetings, he’ll talk. He’s assuming responsibility. … He’s letting his personality show a little bit. And he’s going to be out there slinging the rock around.” Jimmy Garoppolo remains on the San Francisco roster, but we'll be surprised if Lance isn't the Week 1 starter. The current uncertainty is keeping Lance outside the top 12 at QB in best-ball drafting.

O-line a concern for SF?

Matt Barrows of The Athletic describes the “blockers in front of [Trey] Lance” as “question marks.” The real issue is along the interior, where nobody’s locked into a starting spot. Of note: C Alex Mack, 36, is questionable to return for another season. And reliable RG Laken Tomlinson signed with the Jets in free agency. The 49ers used a mid-round pick on UTSA OT/OG Spencer Burford, but he’s unlikely to make a year 1 impact. Lance remains a fringe QB1 with a wide range of outcomes.

Lance still expected to start in 2022

ESPN's Jeremy Fowler hears that the 49ers are still planning to start QB Trey Lance this season. QB Jimmy Garoppolo remains of the roster as of now, at least in part because he's still recovering from shoulder surgery. "I'm told that [Lance has] gotten indications, at least informal indications from the team, that he'll be the guy next year. He's set to be that," Fowler said. "Now, whether that means that they would still keep Garoppolo and that could change the dynamic, possibly. But right now, Lance is going to be the starter." We're comfortable drafting as if Lance will be under center for San Francisco this year. And his ADP has actually sunk to QB13 recently, making him a nice value.

49ers QB Trey Lance "was probably further behind than people realized," according to ESPN's Adam Schefter. "Trey Lance is greener than people realize, Trey Lance is going to need more work than people realize." Schefter added that QB Jimmy Garoppolo is not a lock to get traded this offseason. "Garoppolo unquestionably is one of the most popular and respected players in your locker room. Players love playing with him. You have him under contract this year at a very friendly $25 million cap number. And if you play with him this year and you lose him after this year, you're going to get a third-round compensatory pick back in return. So are you better playing this season with Jimmy while getting Trey the training he still needs, or are you better trading Garoppolo for a two, a four and a six? What's the better alternative?" We're still expecting Garoppolo to be dealt this offseason and for Lance to be San Francisco's 2022 starter. But this is a reminder that that's not guaranteed -- and that there will likely be ups and downs for Lance if he does take over.

Lance made only 2 starts as a rookie. It’s slightly worrisome, but we knew he was extremely raw after sitting out the 2020 season. We like the nucleus in San Francisco with Brandon Aiyuk, George Kittle and Deebo Samuel, although Deebo enters a contract year in ’22.