A North Carolina high school career that produced more than 7,000 yards and 100 TDs made White the #1 RB recruit and #9 overall prospect in the class of 2018. He chose Georgia among myriad offers and enrolled early.

White worked in slowly, however, as he rehabbed an ACL tear suffered during the playoffs of his senior year. He then tore the other ACL in summer practice and took a redshirt for his true freshman season with the Bulldogs.

In 2019, White ranked 3rd in carries and yards behind D’Andre Swift and senior Brian Herren. He played in 13 of 14 games and got his 1st start against Baylor in the Sugar Bowl, rushing for 92 yards on 18 attempts.

The next season found White taking the rushing lead for a team that regularly uses a stable of backs. He handled 39.1% of Georgia’s rushing attempts; 46.3% of the RB carries. White turned that into 44.3% of the RB rushing yards and 68.7% of the RB rushing scores. He ranked just 3rd among Bulldogs backs in receiving, though, seeing just 2.9% target share.

White’s final Georgia campaign saw his market shares dip a little, as James Cook siphoned more rushing work. White drew 36.2% of RB carries and produced 35.5% of rushing yards and 44% of rushing TDs. He once again sat behind Cook and Kenny McIntosh in receiving work and also trailed both teammates in yards per carry (5.4 vs. Cook’s 6.4 and McIntosh’s 5.7).

The game film I watched on White backs up his numbers. And I don’t really mean that as a good thing.

His college stats were … fine. And his tape is … fine. But there was nothing that stood out to make me wonder why Bulldogs coaches weren’t feeding him more.

Nicknamed “Zeus,” White is primarily known for running powerfully between the tackles.

That’s not the most challenging run ever, as the 1st defender through the line stumbles and fails to put a hit on White. But you can see the RB’s willingness (desire?) to punish attempting tacklers.

That strength shows up when you watch him, especially in finishing off runs that reach the 2nd and 3rd levels. But it stops short of being godly.

The speed he displayed at the Combine shouldn’t surprise anyone. White was a top sprinter in high school, and you can see his acceleration when a hole opens.

The lateral agility doesn’t show up as much. I’m not sure whether it’s lacking, though, or if White just prefers the shortest-distance approach of trying to keep things inside.

Despite the 2 ACL tears behind him, there certainly remains some springiness …

That 2nd sample shows some awkward footwork. Frankly, I didn’t see enough cuts from him (despite the 24-minute video that ostensibly includes all of his 2020 touches) to know whether that’s a weak point or just a 1-run sample.

Here’s better footwork to evade a couple of backfield challenges early in the title-game win over Alabama.

For what it’s worth, ESPN’s Kirk Herbstreit sounded surprised by the moves in the broadcast.

What is there to get excited about with Zamir White?

It’s not that there’s anything especially wrong with him. I just struggle to see what’s especially right.

White did lead the Georgia backfield in carries each of the past 2 years. The lackluster carry shares would be easier to overlook, though, if he weren’t trailing his backfield mates in rushing efficiency and receiving work.

I did see White catch a few passes in the 2020 tape, but Georgia clearly deemed him the #3 pass-catching back each of the past 2 years. We can explain away low catch numbers for players such as Jonathan Taylor, AJ Dillon or Kenneth Walker in offenses that just didn’t cater to that particular area. But it’s tougher to look past when that work is going to teammates.

Player Profiler’s top comparison for White is Damien Williams, which makes sense would be fine for him as an NFL career path. It also hints at how replaceable an asset he seems to be, though. It’s also worth noting that Williams is a little thicker (5’11, 222 vs. 6’0, 214) and caught more passes in college.

We’ll see just where White lands in the NFL Draft and what his team plans for him. But I won’t be breathlessly awaiting that destination. 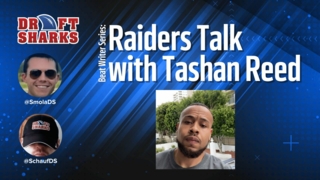 Tashan Reed of The Athletic answers our questions on Davante Adams, Josh Jacobs and more Raiders.