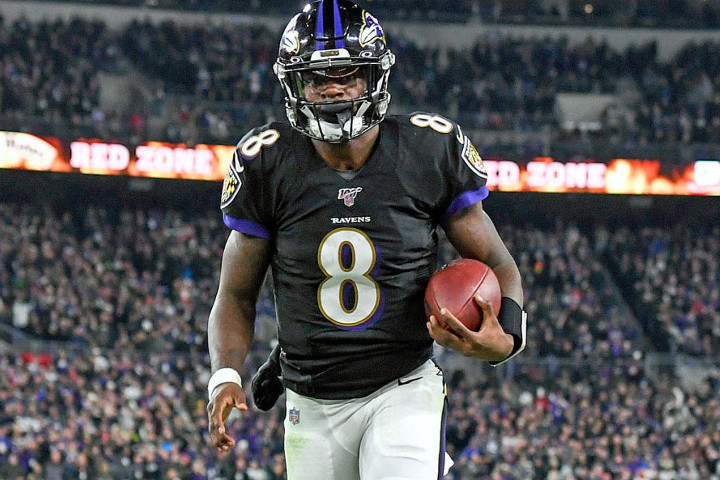 Jackson has been on an absolute tear of late and is in another smash spot against the Titans’ putrid defense with the highest team total on the slate. The Titans defense gave up the 4th most fantasy points to opposing QBs

Jackson has averaged 73 rushing yards per game since the Ravens Week 7 bye, along with 16 total passing TDs.

I slightly prefer Lamar to Josh Allen simply because of the former’s rushing ability. Jackson has surpassed 80 yards rushing in 4 of his past 5 games, including 3 games of 94+ yards.

Lamar is priced just $300 more than Josh Allen and has actually excelled as a passer with 8 passing TDs in just his last 3 games.

I’m expecting a 25+ point performance from Lamar in a great matchup and will be using him in at least 50% of my lineups this weekend.

NOTE: I don’t like the price/ceiling of any other QBs on the slate besides Jackson and Allen, so I’ll be using those 2 in just about all of my lineups. The only other QB I will be using will be Tom Brady in about 10% of my lineups and stacking him with Chris Godwin/Antonio Brown.

Kamara missed Week 17 due to COVID but is expected back for Wildcard Weekend.

In Kamara’s last game, he scored 6 TDs against the Vikings, which was the 2nd highest FD score of all time (only behind Jamaal Charles).

The Saints are favored by 10 points at home against the Bears and Alvin is $1,200 cheaper than Derrick Henry, who gets a tough matchup against the Ravens.

I prefer Kamara over Jonathan Taylor ($8,800) in the same price range. And Kamara has just as good of a chance at multiple TDs as Henry.

Kamara will be my highest owned RB on the slate in over half of my lineups.

Akers returned from a high-ankle sprain and was instantly used as a workhorse RB with 25 touches in Week 17.

He’s practicing in full this week and should be in store for another huge workload in a matchup with the Seahawks.

Akers was ineffective as rusher last week with 21 carries for 34 yards but did set a career high in receiving yards with 52 on 4 grabs. The Seahawks have surrendered the 10th most receiving yards to opposing RBs.

Akers is way too cheap for his monster usage.

I’m getting exposure to Josh Allen by rostering Diggs, who has been one of the top WRs in the NFL all season long.

Diggs is the top-priced WR on the slate for good reason. He’s been rock solid all season, with double-digit targets in 6 of his past 7 full games. Diggs dominated once again last week with 7-76 in just 1 half of football against the Dolphins.

Prior to last week, he’d gone over 130 yards in 3 consecutive games with 4 TDs during that time span.

Diggs is on the injury report this week with an oblique but has been practicing and should be all systems go in a playoff game against the Colts.

The Colts defense isn’t one to be feared as they have allowed 7 TDs and recorded 0 INTs in their past 3 games against Mike Glennon, Ben Roethlisberger and Deshaun Watson.

Diggs should be able to get open early and often against Xavier Rhodes, who has struggled to defend quick WRs throughout his entire career.

Brown has looked incredible the past few weeks, catching 25 of 32 targets for 315 yards and 4 TDs over his last 4 games. For some reason, FD hasn’t adjusted his price.

AB has a TD in 3 straight games, including a monster 11-138-2 performance against the Falcons in last week’s season finale.

Mike Evans was injured in the 1st half of that one, which was part of the reason for AB’s target rise. But Evans figures to be banged up/limited once again this week with a hyperextended knee.

AB is $1,300 cheaper than Chris Godwin and is capable of scoring a TD from anywhere on the field. $6,500 makes him an exceptional value.

Andrews has by far the highest ceiling among TEs on the slate and is only $600 more than Logan Thomas and $1,000 more than Rob Gronkowski.

Andrews has been targeted 6+ times in 5 of his past 6 games, making him the top TE on the slate and the top stacking partner with Lamar Jackson.

The Seahawks ($3,600) are also in play as they are way too cheap as home favorites against the Rams.

I wanted to write up the Bills, however, because I am expecting a Buffalo rout over the Colts. If the Bills can build up a lead, they should be able to tee off against Phillip Rivers, who has always been prone to ugly INTs.

The Bills defense has excelled of late with 52 FD points in their last 4 games, including a whopping 4 TDs, 8 sacks and 5 INTs.

With the Bills favored by 6 at home, I will be riding the heater and hoping they smash the Colts and force a couple of turnovers.