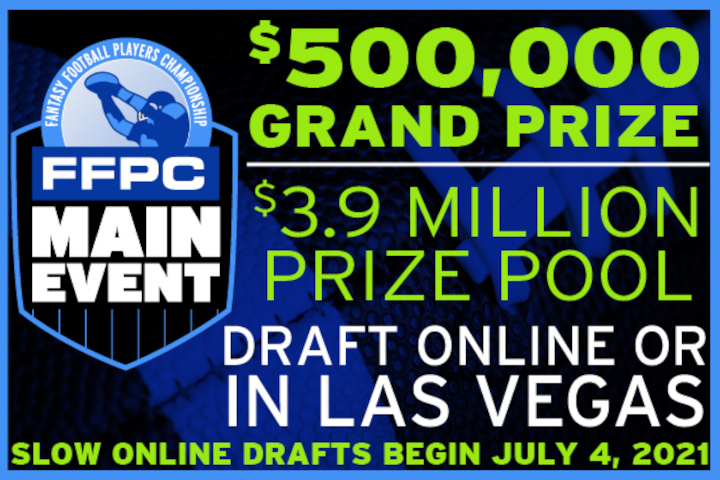 Welcome to part 2 of the FFPC Main Event Strategy Series. In part 1 of the series, I discussed the contest’s unique scoring system and roster requirements.

In part 2, I want to dive a little deeper and talk about building a championship-winning foundation in the early part of the draft -- Rounds 1 through 6.

The key to building a roster that can smash opponents is to dominate the flex positions. In the FFPC, there are 2 flex spots where you can start a RB, WR or TE. Roster construction plays a huge role in who you will be targeting on draft day. If you don't play your cards right and know when to take each position, you’re going to lose out on maximizing those flex spots.

Roster construction can be as important as the players you draft. If you need help deciding between players check out the new Draft War Room.

In order to maximize the flex spots, we need to know what type of players to take there.

According to the Draft Sharks 2021 projections, 11 of the top 24 scoring players (non QBs) are RBs, 10 are WRs and 3 are TEs in this TE-premium scoring system. That's a pretty even split between WR and RB. Even among the top projected scorers there’s a mix.

We can take advantage of this by looking at 2021 Main Event ADP to find where the value is for the certain positions.

Look at this ADP from the 2021 Main Event below from the Draft Sharks ADP Index tool. Drafters are so RB thirsty that they are passing on WRs that are projected to score more points just to fill that RB spot.

Every WR on the list below is projected to outscore Harris, Gibson and Chubb -- and some of the WRs are going a round later. 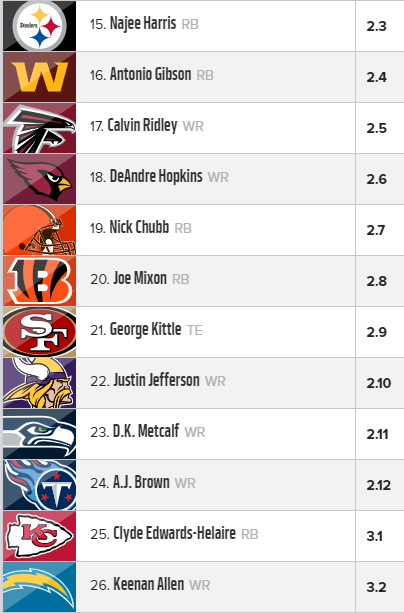 This trend continues for the first 7 rounds or so. WRs are just better bets to outproduce their RB counterparts at ADP. Am I afraid to let receivers fly in the early rounds? Absolutely not! I understand the position scarcity of RB, but the most points in my starting lineup is what I am looking for, especially in the flex.

So now that we have an idea of which positions to target in which rounds, let's attack the first 6 rounds.

I will post the current ADP for the 2021 Main Event and give my strategy for each round. 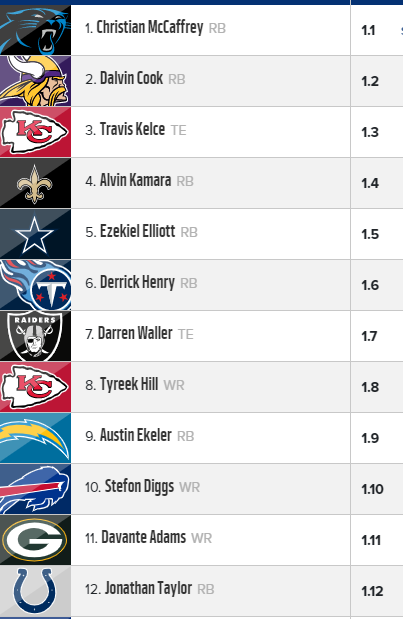 If you are lucky enough to get the first pick, take CMC. End of story.

The 2nd pick is a little trickier. ADP says RB Dalvin Cook -- and that's a fine pick. But TE Travis Kelce is also an option. Draft Sharks has Kelce as the 2nd highest scoring non-QB in this format, so he can be the plan. But you have to be willing to build a Zero RB or modified Zero RB (1 RB early, then wait) team.

I actually have the 2nd pick in 2 Main events, and I plan on taking Cook in one and Kelce in the other.

At the 4/5 spot I would take RB Ezekiel Elliot. I think he has top 2 upside at the position. Taking a RB here also allows for a Modified Zero RB start and that happens to be my favorite way to build a team in 2021.

If Zeke is gone, I would lean Tyreek Hill. He’s the favorite to be the top WR, possessing a high floor with a massive ceiling. Hill’s nice playoff strength of schedule is an added bonus. His ADP is pick 6, but I have seen him fall to the 1.09.

Kamara, Ekeler and Adams would be my next three, in that order. Kamara has the volume upside, Ekeler has a CMC-type season in his range of outcomes and I have Adams in the same tier as Tyreek Hill as far as talent and high-level QB play. I don't think you can go wrong with any of these players.

The end of Round 1 is where I have spent most of the summer drafting -- and I don't hate it. There might be some massive value in these spots. Adams, Stefon Diggs and Saquon Barkley fall right into this ADP. Barkley has top 2 upside. If he is healthy Week 1, he’ll be going ahead of this ADP come September. Diggs is a target monster WR that shouldn't bust barring injury.

If Daren Waller fell to 12 I would consider it. I’m a huge fan of some later TEs, so I have been passing on Waller, but he is probably worth the pick.

Pick 12 is a nice spot for any strategy, too. You could go WR/WR for a nice Zero RB build or robust RB with Barkley/Antonio Gibson/Aaron Jones. 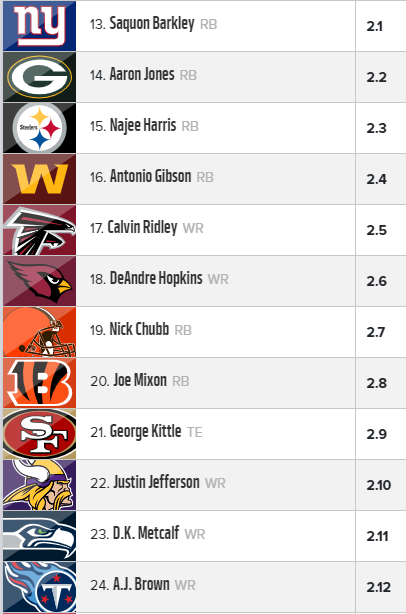 If there is a RB you like in the 2nd round that you think can finish top 5 at the position, then that RB is certainly an option. RBs I like in that mold are Antonio Gibson and Joe Mixon. Gibson is set to breakout and has the best RB playoff schedule in the league. Mixon, on paper, should smash with volume and talent but has yet to put it all together.

Outside of a high-upside RB, WR is the way to go. I wouldn't hesitate to take Calvin Ridley, DeAndre Hopkins, Justin Jefferson or DK Metcalf anywhere in the 2nd round -- even if I started WR/TE in the first round. Like I referenced in the chart above, WRs from the 2nd round are less likely to bust and likelier to score more fantasy points.

I lean away from Kittle here because there are too many question marks with a rookie QB and a bunch of mouths to feed in San Francisco. I also like another TE in the 3rd round a little bit better. 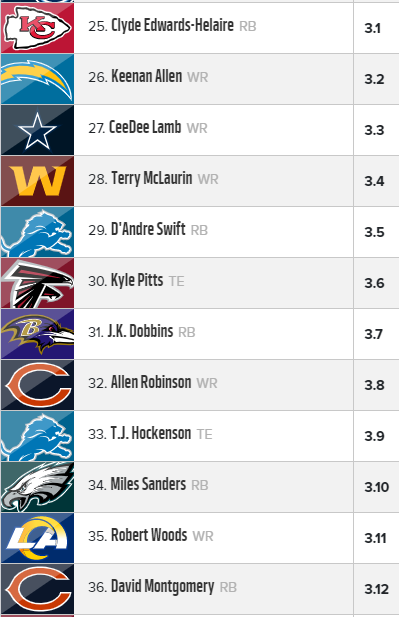 This is my WR/TE round. I absolutely LOVE T.J. Hockenson in the 3rd. I have him as my TE3 this season, ahead of Kittle. I haven't been taking any Kittle because I feel like Hockenson, a round later, is the same player.

At WR, Keenan Allen has been my guy in the 3rd. I also like Terry McLaurin and Allen Robinson, but I have Allen a cut above. I know, I know ... CeeDee Lamb is a stud! I don't see him getting the target volume that the other 3rd-round WRs get and I think he will disappoint at his WR11 ADP.

We love Robert Woods over here at Draft Sharks, but at WR13 in Round 3 there isn't much value. I also think Cooper Kupp is the WR to own for the Rams this season.

Clyde Edwards-Helaire has been going in the 2nd round all summer and is the only RB I would really consider in the 3rd, unless one of the 2nd rounders falls. CEH possesses top 5 upside in an elite offense with a much-improved O-Line. Pairing him with CMC at the turn and then waiting 6-7 rounds for another RB might be a league-winning play. 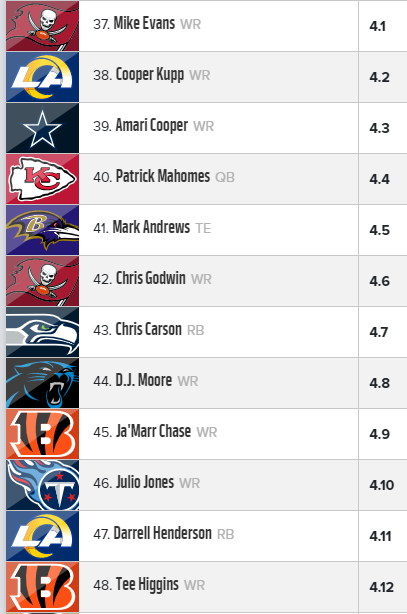 Another round full of WR targets.

Mike Evans and Kupp have been climbing in ADP. But even at WRs 14 and 15, they’re nice value and have top 10 upside. Amari Cooper and Chris Godwin are also nice selections in the 4th round and should easily outscore their RB counterparts in this round.

I would not take Mahomes unless you absolutely NEED to have a Chiefs stack. There is just so much value at the QB position with the upside of the running QBs this season.

If you passed on Hockenson or Woods in the 3rd round and they are available in the mid 4th ... snatch ‘em up!

I don't think I have taken a single RB in the 4th round through multiple drafts this summer. As I discussed, the bust rates for RBs in these rounds is too high and there are too many question marks. If you started Zero RB through 3 rounds and you have to have a RB, then DS staffer Matt Schauf would beg you to take Chris Carson. 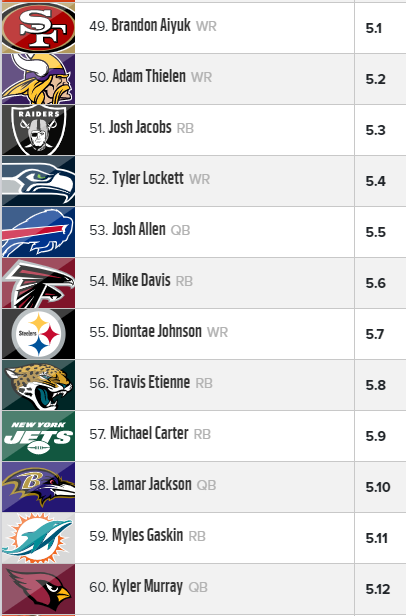 The 5th round is a little tricky. This is where the elite QBs start to fly off the board and they can become tempting. I wouldn't blame you for wanting to stack an elite QB with a WR that you took earlier -- but the 5th round is too pricey for me.

WRs Tyler Lockett, Adam Thielen and Diontae Johnson have been my go-to players in Round 5, in that order. Lockett belongs in the middle of Round 4 and Thielen probably does too. But age, injury concerns and TD regression have me a little scared. Aiyuk is intriguing. He showed plenty of talent as a rookie and has a great strength of schedule in 2021. A rookie QB and a cast of other weapons, though, have me off of him at ADP.

I LOVED Michael Carter in Round 7, liked him in Round 6, but if he is climbing into Round 5, that’s annoying. He still has a little value being taken as the RB24, but I can't see him with top 15 upside unless he really takes over the full-time role. 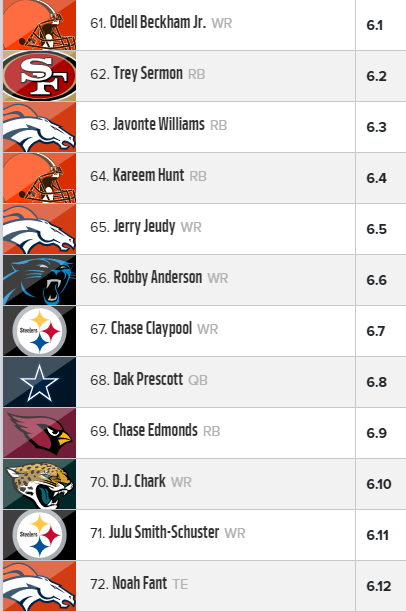 If one of your top 5 QBs falls into Round 6, now might be the time to grab him. If you took a TE early, though, it's hard to build with an early TE and early QB. You will probably find yourself really lacking at RB or WR. Attacking the onesie positions early is NOT how we dominate the flex.

Trey Sermon has been my guy in Round 6, or Michael Carter if he falls. Sermon has the ability to take over that Niners juicy starting RB spot. And if he does, he’s a perfect RB2 when I start Modified Zero RB.

WRs I like in Round 6 are Jerry Jeudy, Robby Anderson and Chase Claypool. Remember we want to dominate the flex, so we are still hammering high-upside WRs. Jeudy and Claypool are prime year 2 breakout candidates. Robby Anderson has already flashed and is being reunited with his old buddy Sam Darnold.

So, that’s my early round Main Event strategy. So many ways to build a championship-winning roster. A RB or two early and then pound the WR position to load up your flex with the highest scoring players possible. Modified Zero RB is my favorite start. Oh, and maybe sprinkle in Hockenson in the 3rd or 4th to really add some firepower to the starting lineup.

The final part of my FFPC Main Event Strategy series will cover how to attack the QB and TE positions. To fade or not to fade… that is the question. See ya then!