How Can Speed Score Help Your IDP Lineup? 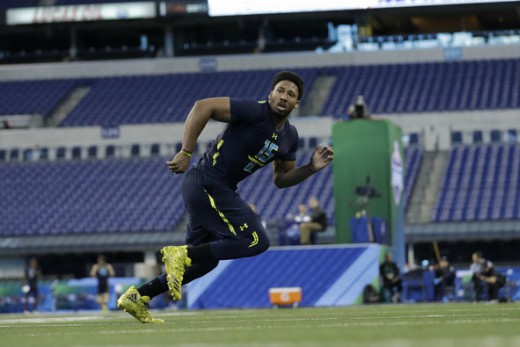 If you’re reading football articles this time of year, then you probably already know about Speed Score.

Bill James introduced it for baseball analysis way back in 1987. But football folks are more familiar with the version that Football Outsiders rolled out in 2008 to help evaluate RB draft prospects.

Since then, we’ve become accustomed to looking at the annual RB numbers around this time. But it looks like we can apply the equation to other positions as well.

Jared turned me on to this study from the Harvard Sports Analysis Collective that determines which Combine categories have portended early NFL success at each position. According to that analysis, DEs and OLBs rank 1-2 in terms of “importance” of NFL Scouting Combine results. In short, those positions have more commonly found certain measurements pointing to early success in the league.

The study also looked at which particular categories proved most predictive at each position. For DEs, that turned out to be 40 time and weight.

Once I finally got the rest of my family to bed and the new cat to stop attacking my hand, it dawned on me that Speed Score might just prove to be useful for these edge rushers.

So I dug into the NFL Scouting Combine results available on Pro Football Reference, which date back to 2000. That provided 442 players who took part in the Combine from 2000-2016, recorded a 40 time and carried a DE designation.

Football’s Speed Score equation (as you can see at the FO link above) goes like this:

So I applied that to the 442 players from the PFR data and found the average score to be 99.07—nearly identical to RB, where anything 100 or better is considered good.

Of the 442 historical players, 211 exceeded the 99.07 average. But does that mean they were better players?

Well, that part’s subjective. You can argue in various directions about what makes a “good” player, especially at a position such as DE whose most famous statistic – the sack – doesn’t necessarily measure talent.

I decided to use PFR’s Approximate Value (AV), which is their “attempt to put a single number on each player-season … [to] compare across years and across positions.” Basically, the higher your AV for a season, the better your year.

The 211 DEs with above average Speed Scores have averaged a total AV of 21. The 231 players who came out below average have compiled a 10.33 average AV.

So as a group, the above average Speed Score crew has been roughly twice as good as the below-average portion. We could quibble over how certain players inflate/deflate those numbers, but the point here is just to demonstrate that we’ve seen more success from the better Speed Score guys. I think we’ve accomplished that.

Now that we’ve accepted Speed Score as a worthwhile measure for DEs, let’s look at the scores for this year’s impressive crew.

Of the 36 qualifying DEs from this year’s Combine, we have 19 more who notched above-average Speed Scores. That backs up the claims of this being a strong defensive draft class.

The 211 above-average speedsters over the previous 17 Combines average out to 12.4 per year. The 442 total qualifying DEs over that span average out to 26 per year. So we’ve generally been able to expect 47.7% of the DEs to test above average. This March has given us 52.8%.

You shouldn’t be surprised to see Myles Garrett near the top of the list. And if you watched the Combine over the weekend, then you probably knew about Kansas State’s Jordan Willis having a big Sunday. Temple’s Haason Reddick has been lighting up this evaluation season, starting with a ballyhooed Senior Bowl week. More quietly, FAU’s Trey Hendrickson nabbed player-of-the-week attention at the East-West Shrine Game.

I’ll be looking further into all of these players – as well as others – before posting my IDP rookie-draft rankings later this spring. And you can bet I’ll keep checking on the DE Speed Scores for ensuing classes.