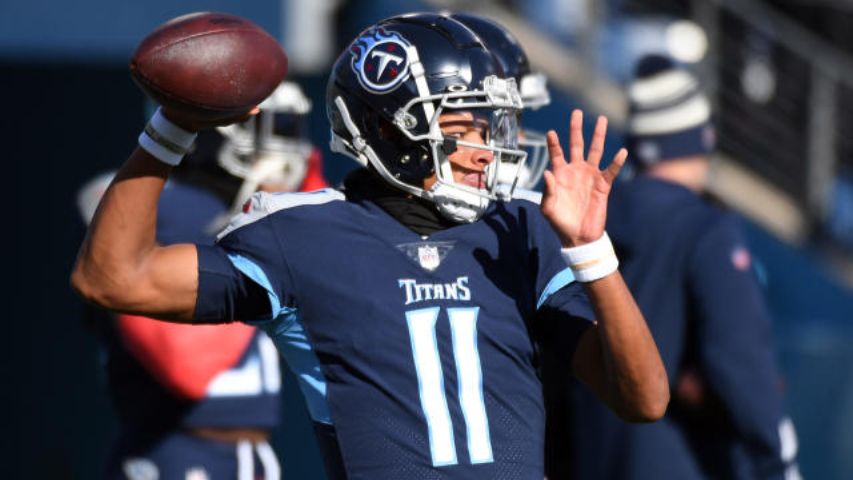 If you think you're angry about how this Thursday night game has turned out, just imagine how the NFL feels ...

Imagine you invited everyone you know over for a dinner party. But then the night arrives, and you realize you only have frozen fish sticks. And your oven's broken. Oh, and the only person you can call to fix it is Joshua Dobbs.

The Tennessee Titans have clearly conceded this contest. They won't play Derrick Henry on offense. They placed Ryan Tannehill on IR today. And they also finally realized that Malik Willis shouldn't bet on an NFL field right now.

So we'll get Dobbs and his 17 career attempts in nearly 6 NFL seasons at the helm, throwing passes to a receiving corps that will probably be wondering why it can't get the night off, too. Hassan Haskins is expected to lead the backfield.

They'll face a Cowboys squad that can still win the NFC East and the conference's top playoff seed. Dallas will go without RB Tony Pollard (thigh) and arrives as a 14-point favorite. The setup begs the question of whether we should expect their starters to go the whole way.

Well, the DFS Showdown format allows us to play a little more "what if" than we can comfortably do in season-long fantasy football playoffs lineups. And we'll get into some of that as we peruse the value charts for DraftKings and FanDuel. 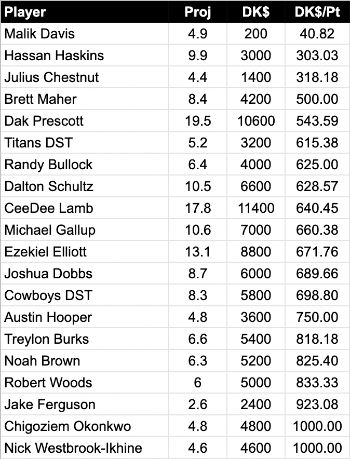 Malik Davis looks like a near-lock for DK lineups. He becomes the RB2 for Dallas in a matchup that should find them taking the lead quickly and beating the host mercilessly. RB Ezekiel Elliott is sure to play a large part in building whatever lead the Cowboys amass. But if we do get a 1-sided start to the game, then expect the visitor to rest its vet. We've already seen Davis mix in for 23 carries and 5 targets this season, primarily thanks to time Elliott missed with a knee injury. And although most of his work came in lopsided Dallas wins, Davis even carried 5 times in a Week 10 loss to Green Bay.

A RB with a good chance at work on a heavy favorite for the minimum salary looks like a free space on a bingo board.

The Tennessee backfield could be key here. We obviously need to play someone from that side, with Dobbs arguably most attractive simply because he's a $6K QB. But the Titans -- already a run-favoring offense -- figure to keep it on the ground as much as they reasonably can. Haskins has been talked about as the expected leader. But Julius Chestnut trails him by just 6 carries this season (11-5) and was the more effective preseason rusher (4.1 yards per carry vs. 2.6).

If he comes anywhere close to Haskins in fantasy points tonight, he'd be doing so at half the salary and -- more importantly -- likely a far lower rate of ownership in showdown tournaments.

That doesn't mean you necessarily should play Chestnut over Haskins, but mix him in if you're building multiple lineups -- even if you don't need the salary savings. 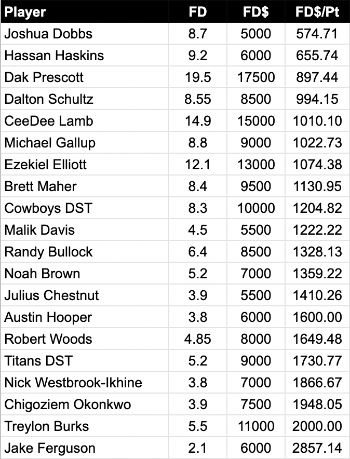 A QB at minimum price? That makes Dobbs nearly a must as the Titans play on FD. We obviously can't expect big passing numbers, but it helps that Dobbs ran a 4.64-second 40 as an NFL Draft prospect. That's 89th percentile for the position. He turned that into 1,502 yards and 23 TDs on the ground across his 2 starting seasons at the University of Tennessee.

We're wrapping this dynasty fantasy football miniseries with TEs ... and the guys did NOT always agree. Find out who created a stir -- and who Jared deemed the BEST "sell" on the market ...