Tom Brady can't be happy to see the Saints come up again on the schedule.

Actually, that's not fair. The guy is so competitive that he probably loves getting another shot at his NFC South nemesis. But Brady's stat lines sure don't love this matchup.

In 6 meetings with New Orleans since joining the Bucs, Brady has completed just 59% of his passes and 6.2 yards per attempt, with 9 TDs vs. 8 INTs. He has finished QB26 or worse in 3 of 5 regular-season meetings. One of the others found Brady climbing to QB9 thanks to a rushing score. The Bucs needed huge passing numbers in the remaining contest to counter 3 early Brady turnovers that staked the Saints to a big lead. (They still lost.)

Brady's most recent attempt at the Saints found him completing just 53% of his throws for 190 yards and 1 TD in Week 2 of this season. The QB didn't have WR Chris Godwin for that one because of a hamstring injury.

Godwin's certainly ready for this round. But the Saints also might be getting some key defenders back.

CB Marshon Lattimore, most notably, has been out since Week 5 with what's generally been referred to as an abdominal injury. Lattimore has actually been recovering from a lacerated kidney and 2 broken ribs. Clearly, New Orleans hoped to get him back much sooner. That's why he never landed on IR, despite missing the past 6 contests.

He's still not back to full practice, though, and remains questionable for the game. And we might have to wait until inactives come out around 7 p.m. ET to know whether he's in. If Lattimore doesn't play, it'd be good news for Brady and WR Mike Evans.

New Orleans also hopes to get LB Pete Werner back from an ankle injury that required surgery. He's also questionable.

The Buccaneers' biggest questions lie on offense. RB Leonard Fournette, WR Russell Gage and TE Cameron Rate are all questionable. We'll update everyone as soon as we know.

For now, let's check the charts for some DFS value plays ... 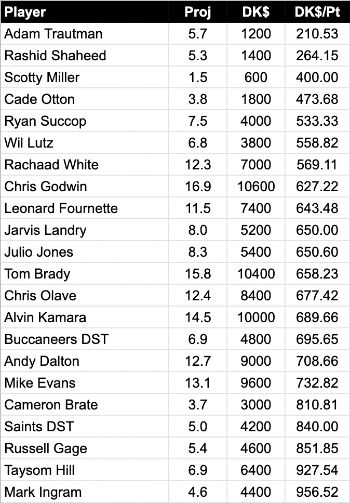 Saints TE Juwan Johnson has already been ruled out for this game. That has helped boost Adam Trainman to the top of this value chart. The Bucs check in as a neutral TE matchup by our adjusted fantasy points allowed. But only 3 defenses are allowing more TE receptions per game so far. Johnson's 7 targets ranked 3rd on the team in the Week 3 meeting, and this rematch finds the Bucs down both starting safeties. There's upside to Trautman at a reserve's salary. 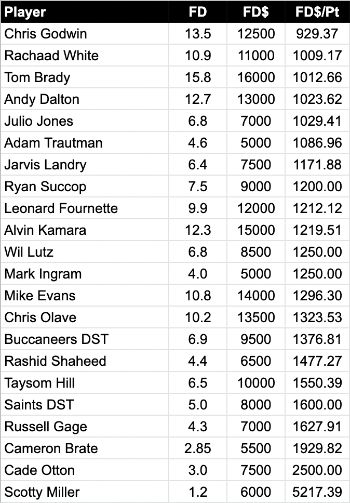 We all love Rachaad White. And the fact that he trails Leonard Fournette in showdown salary on both sites this week is sure to make the rookie more popular than the veteran. We have White projected higher across formats.

But the gap isn't wide. And really, we're all just guessing. White got the start the last time we saw both on the field together, but Fournette split most of that Seattle game with him before hurting a hip and leaving early. Fournette also claimed the backfield's only 2 rushing attempts inside the 10-yard line.

So Fournette outscoring White wouldn't be shocking, and it might be more likely in a half-PPR format than full-PPR. 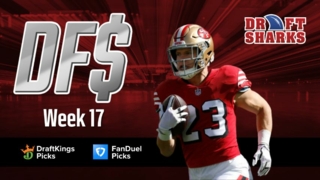 Lamar Jackson doesn't have a contract for 2023. Could that plus his knee injury create a buying window in your dynasty league? He leads a list of 12 QBs you'll want to be aware of heading into the offseason ... 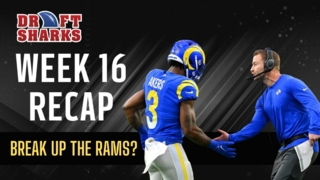