Should a bad 2020 keep Tua Tagovailoa out of your draft plans? 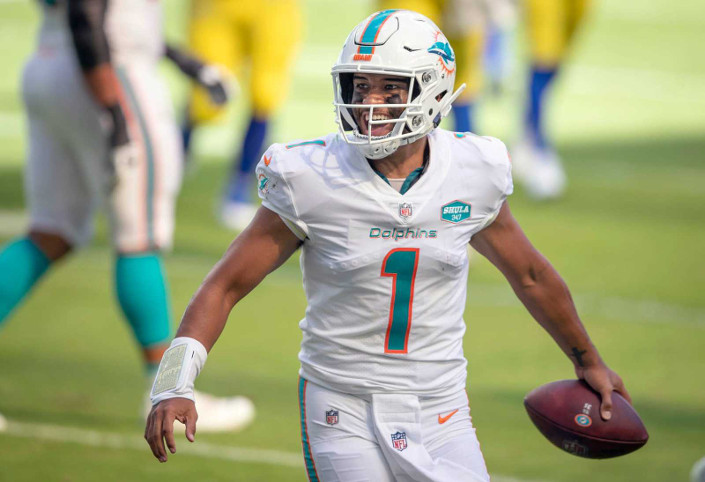 - The Dolphins selected Tua 5th overall last year. He was eased into training camp as a result of a dislocated right hip suffered at Alabama in November of ’19.

- Tua also exited college with a pair of high-ankle sprains — one to each ankle. Both required surgery.

-Tua made 9 starts as a rookie, with the 1st coming in Week 8. Ryan Fitzpatrick replaced an ineffective Tua in the 2nd half of games at Denver and at Vegas.

- The O-line ranked 21st in Pro Football Focus’ pass block grades. Tua frequently got the ball out quickly, with 58% of his attempts coming out in 2.5 seconds or less. That ranked 7th most among 37 QBs with 150+ dropbacks.

- Miami’s supporting cast looks much improved. Speed was added with Round 1 pick Jaylen Waddle and free agent Will Fuller. Note: Fuller will miss Week 1 on suspension for PEDs.

- At Alabama, Tua and Waddle combined for a 74% completion rate and nearly 17 yards per completion.

- The new WRs join DeVante Parker and Mike Gesicki to form one of the league’s top groups of pass catchers.

- Miami added to the O-line on draft day with Notre Dame OT/OG Liam Eichenberg. With high picks like Austin Jackson (LT) and Robert Hunt (OG) under contract, there’s high upside youth all along this unit.

- Miami moved on from 2020 OC Chan Gailey. They replaced him from within co-OCs Eric Studesville and George Godsey. It’s unknown who will call plays, but in May, RB Myles Gaskin said the playbook will be “much different.”

- In a May interview, Tua admitted the following: “Last year, for me, I wasn’t as comfortable calling plays … I just didn’t have the comfortability of checking plays, alerting plays….I just rode with the play even if I knew it wasn’t going to work, I was going to try to make it work ... I didn’t actually know the playbook necessarily really really good, and that's my fault."

- Tua also claimed that he feels more comfortable in the offense and will have the freedom to do more at the line of scrimmage entering year 2.

Tua failed to meet expectations in a season that saw high-end play from fellow rookies Joe Burrow and Justin Herbert. The Alabama product never tallied more than 2 passing TDs in a game. He finished as a QB1 in just 1 of 9 starts.

The Dolphins didn’t surround Tua with the environment to succeed, though. That’s clearly changed entering year 2.

Now a full season removed from hip surgery, Tua heads into the summer with the starting job to himself and names like Jaylen Waddle, Will Fuller, DeVante Parker and Mike Gesicki filling the depth chart. While this offense doesn’t project for high pass volume, a loaded supporting cast puts Tua in a breakout spot. His low-end QB2 ADP only makes him an easier late-round selection.