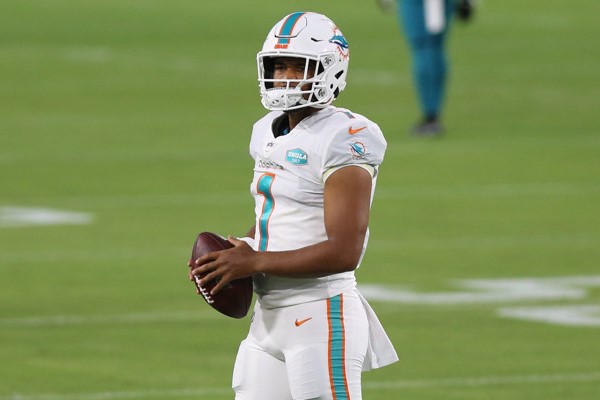 Considering what little Tua’s done to this point, you might think he’s an easy avoid in 2022 drafts.

After all, the QB position is rich with fantasy options.

We simply can’t discount the upside to a healthy Tua — only in year 3 — with this stacked Miami supporting cast. Tyreek Hill and Jaylen Waddle give him elite run-after-catch ability, so an iffy deep ball is less of a concern. Mike Gesicki and Cedrick Wilson supply some red zone size.

Mix in a breath of fresh air with new HC Mike McDaniel, and it’s easy to see Tua joining the spot-start QB1 mix this fall.

The Dolphins fired HC Brian Flores. This one was not expected. Flores lasted 3 seasons in Miami, compiling a 24-25 record. He won 19 games over the past 2 years, though, and seemed to have the Fins heading in the right direction. According to NFL Network's Ian Rapoport, Miami is retaining GM Chris Grier. "A power struggle in Miami," Rapoport tweeted. We'll see where the Dolphins go at HC.

Dolphins QB Tua Tagovailoa (finger) is not listed on the final injury report. He was a full-go in practice on both Thursday and Friday. That finger should be close to 100% this week, making Tua a viable fantasy spot starter in a plus matchup vs. the Jets.

Dolphins QB Tua Tagovailoa (finger) was upgraded to full participation in Thursday's practice. That makes him easier to trust in this weekend's plus matchup vs. the Jets.

Dolphins QB Tua Tagovailoa (finger) was limited in Wednesday's practice. He's on track to start vs. the Jets this weekend after playing well in relief of QB Jacoby Brissett Thursday night. But it'd be nice to see Tua get in a full practice or 2 this week.

Dolphins HC Brian Flores named QB Tua Tagovailoa his Week 11 starter on Monday. Tagovailoa replaced QB Jacoby Brissett in the 3rd quarter of Thursday night's game and didn't seem bothered by that small fracture in his right middle finger, completing 8 of 13 passes for 158 yards. We'll keep an eye on his practice participation level this week, but Tua gets a nice matchup on Sunday vs. the Jets' bottom-5 pass defense.

Tua simply didn’t take the year 2 jump that his pedigree suggested was possible. Missing Will Fuller for nearly all of the year hurt. But Tua nevertheless proved his arm talent isn’t anywhere near the league’s elite. Adding Tyreek Hill, LT Terron Armstead and a bright young offensive mind in HC Mike McDaniel at least sets Tua up for success.