The Impact of Offensive Line Play on Fantasy Production 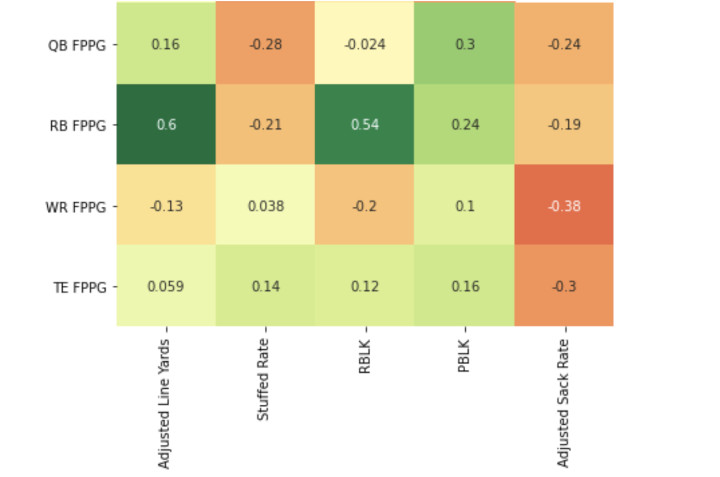 Offensive line play matters to fantasy production. That’s not debatable. Put you, me and 3 other fantasy footballers on the Titans offensive line and Derrick Henry doesn’t run for 2,000 yards last year.

We have answers. Using data from the 2020 season, we measured the correlation between multiple offensive line play metrics and fantasy production at every position.

Here are the O-line metrics we used:

Adjusted Line Yards: A Football Outsiders metric that “attempts to, even to a small extent, separate the ability of a running back from the ability of the offensive line.”

Stuffed Rate: The percentage of carries by RBs that are stopped at or before the line of scrimmage (from Football Outsiders).

Adjusted Sack Rate: Sacks divided by pass plays, with adjustments for opponent quality, as well as down and distance (from Football Outsiders). 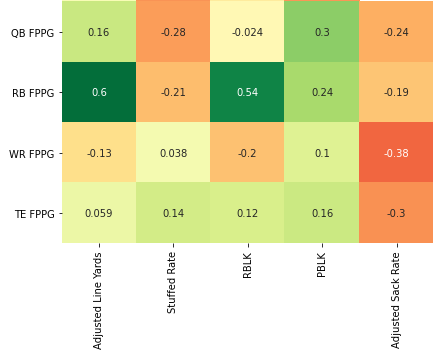 A quick glance at the chart shows that offensive line play matters most for RBs. The correlations between Adjusted Line Yards and PFF run-blocking grade and RB production are very strong. We should definitely be factoring in O-line play when evaluating our fantasy RBs.

Offensive line play doesn’t matter as much at QB, WR and TE. But there’s definitely still an impact to those positions.

Interestingly, Adjusted Sack Rate and WR fantasy points per game have the strongest correlation outside of RB. It certainly makes sense. If a QB is getting sacked -- or even just getting pressured -- he’s going to struggle getting the ball to his WRs.

But it’s surprising that WR production (and TE production) are more strongly correlated with Adjusted Sack Rate than QB production. Maybe that’s because QBs getting pressured end up scrambling and adding some fantasy points via rushing?

One final result I found interesting is the relatively strong negative correlation between Stuffed Rate and QB production (as Stuffed Rate goes up, QB production goes down). Stuffed Rate is a RB stat but evidently impacts QB production. My guess: a QB’s production suffers when his running game is producing a lot of negative plays and putting the team in unfavorable down-and-distance situations.

So what’s it all mean as we look ahead to 2021? Offensive line play should be a significant factor in our RB evaluations -- maybe the 2nd biggest factor behind only projected volume. O-line quality matters less at the other positions. But it still matters. At minimum, use it as a tiebreaker when deciding between 2 similar QBs, WRs or TEs.

Tomorrow, we’ll look at the offensive lines we expect to have the biggest impact -- positive and negative -- on fantasy production this season.

Dak Prescott and Patrick Mahomes highlight NFL Week 11 with their high-upside matchup. Who else belongs in your fantasy football lineup ... or on your bench? 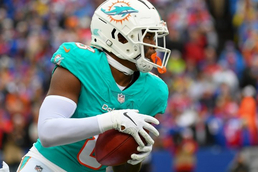 Jevon Holland says hello, plus defensive notes from around the league.