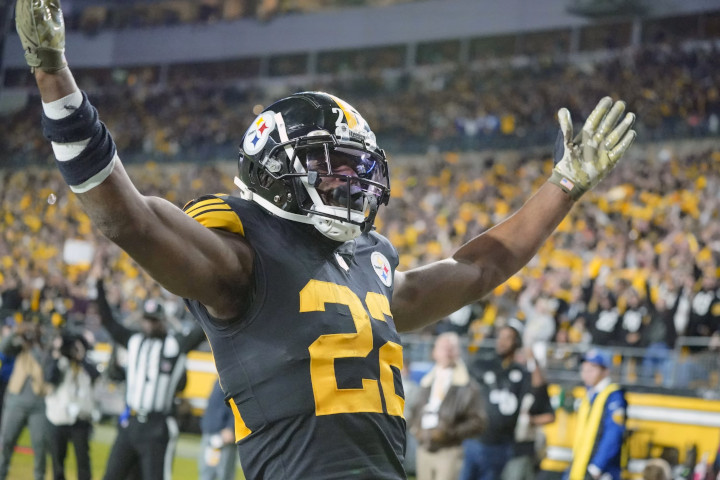 Dak Prescott ($6,900) is a strong pay-up option in a prime bounce-back spot at home for the Falcons. But the makeup of this slate makes going cheaper at QB the play.

He’s in a pristine spot on Sunday at home for a Jaguars squad that ranks dead last in Football Outsiders’ pass defense DVOA and 24th in adjusted fantasy points allowed to QBs. The Colts’ 29-point implied total is 4th highest on the week.

Teams are pounding the ball on the ground vs. the Chargers. They’ve faced a league-high 26.8 RB carries per game.

And teams are having success running on the Chargers. They rank dead last in Football Outsiders’ run defense DVOA and have coughed up 4.9 yards per carry to RBs.

No surprise, then, that the Chargers have allowed the 9th most DK points to RBs. Expect a busy and productive outing from Cook on Sunday.

Harris has tallied 22+ carries in 4 straight and 22+ opportunities (carries + targets) in 6 straight. He’s averaging 23.3 DK points over that 6-game stretch.

RBs Nick Chubb, Demetric Felton and John Kelly are all out for Sunday’s game on the COVID list. That leaves only Johnson and Brian Hill, who was signed earlier this week, in Cleveland’s backfield.

So Johnson should get the vast majority of the RB touches vs. a Patriots defense that ranks a middling 17th in Football Outsiders’ run defense DVOA and 22nd in adjusted fantasy points allowed to RBs. We saw Johnson in a lead role back in Week 7, when he ripped off 146 yards and a score on 22 carries vs. the Broncos. He ranked 2nd among RBs in Pro Football Focus’ rushing grades that week.

Adams’ production took a hit with Love under center last week. But he’s tentatively expected to get QB Aaron Rodgers back for Sunday’s game vs. the Seahawks. Adams’ averages in 7 games with Rodgers this season:

If volume is what we’re chasing in cash games (it is), Johnson looks like the best value at WR.

He’s averaging 9.9 targets per game, with double-digit targets in 5 of his 7 outings. WR Chase Claypool joins WR JuJu Smith-Schuster on the sideline this week, leaving James Washington and Ray-Ray McCloud behind Johnson on the depth chart. Johnson should dominate targets.

The matchup with the Lions, who rank 29th in Football Outsiders’ pass defense DVOA, doesn’t hurt either.

Johnson could get even more work this weekend if WR Chris Godwin’s foot injury keeps him sidelined. And the matchup is pure: Washington ranks dead last in adjusted fantasy points allowed to WRs.

Arnold's ranks among TEs over his last 4 games:

He draws a Colts defense on Sunday that sits 20th in Football Outsiders’ TE coverage rankings and 31st in adjusted fantasy points allowed to TEs.

The Cardinals offense is dealing with a bunch of injuries. RB Chase Edmonds is out this week, while Kyler Murray, DeAndre Hopkins and Rondale Moore are all listed as questionable. So this is a better matchup for Carolina than it appears on paper.

The Panthers defense has played well all season and ranks 11th among main-slate DSTs in DK points per game. They’re tied for 16th in Week 10 salary.