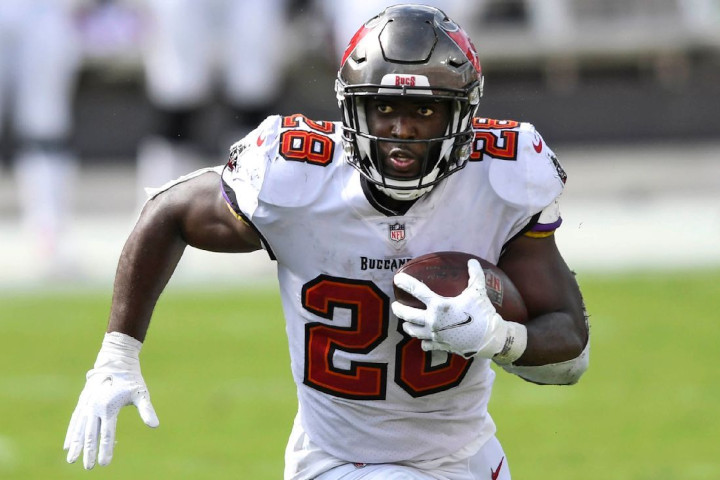 Last week we were robbed of some of the most popular games with Aaron Rodgers out with COVID and Kyler Murray dealing with an injury. This week presents the other side of the coin.There are plenty of superstar fantasy talents in great spots and several excellent game environments with high over/unders to target.

The ceiling of the top-end QBs this week is too good to pass up.I will be paying up at QB and looking to save salary elsewhere.

The passing floor that Brady presents is so high that he projects as well as rushing QBs like Lamar Jackson. Brady has 4 or more passing TDs in 5 of 8 games this season and 35+ pass attempts in every game. The Washington defense ranks dead last in adjusted fantasy points allowed to QBs, 31st in pass defense DVOA and 30th in PFF coverage grade.

This game is the 3rd fastest on the main slate, and the Chargers currently have the 4th highest pass rate in neutral game scripts at 63%. 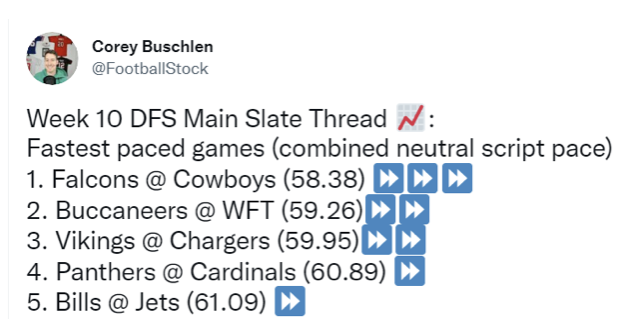 The Vikings pass defense has been boom-or-bust this season, allowing 27+ points in half their games this year but less than 20 in the other half. Injuries to Patrick Peterson, Danielle Hunter, Harrison Smith (COVID), Anthony Barr and Michael Pierce bode well for the Chargers offense.

If I spend down at QB, this is my main target.You sacrifice some ceiling at QB to acquire ceiling in other areas. Folks who play Brady/Herbert/Allen/Dak/Murray etc. will not be able to afford elite RB plays or high-end WRs, which allows for lineup differentiation.

Wentz faces a Jags defense that, before last week, was a lock for fantasy production. They’re currently allowing the 9th most adjusted fantasy points to QBs and rank bottom 10 in pass DVOA and PFF coverage grade.

The top of the RB salary range is the biggest decision point in DFS this week. Dalvin Cook, Najee Harris, Austin Ekeler, Christian McCaffrey, Jonathan Taylor and Ezekiel Elliott are all in excellent matchups with high ceilings.Navigating this elite RB landscape correctly could be very profitable this week.

Harris presents the best combination of floor and ceiling among these high-end RBs. He’s the engine of his offense, currently leading the NFL in weighted opportunities with 21.5 per game. Additionally, he sees a Lions defense that allows the 2nd most adjusted fantasy points to RBs, including 16 total TDs to the position, which is tied for the most with the Jets.

The Vikings defense is riddled with injuries, and the Chargers are faced with the 3rd-fastest game environment to complement a 28-point implied total.In a full-PPR scoring format like DraftKings, Ekeler's receiving ceiling is almost unmatched by anyone other than McCaffrey, Kamara and Swift.

Due to the volume of elite plays at RB and QB, salary savings will be crucial this week. Fournette offers some relief and a similar ceiling to those priced above him — in addition to leverage against Tom Brady stacks.Fournette ranks top 5 in both red-zone touches and goal-line carries among all RBs.

The Washington offense will likely be playing catch-up to the Buccaneers, who are 10-point road favorites. McKissic has received 6+ targets in 3 straight games, with 24 total over that stretch. He also ran over 60% of the routes in both of the blowout losses to the Packers and Chiefs, the game environments that profile similar to this game.

With the Bills implied for over 30 points and disappointing last week, Diggs pops as a great play. He may get overlooked a bit due to Davante Adams in his price range, but a 24% target share in a Josh Allen-led offense vs. the 30th ranked pass defense in DVOA is enticing.

The Cowboys’ offense has the highest implied point total at 31.75.Lamb against Fabian Moreau in primary coverage is the best matchup on the field. Amari Cooper faces A.J. Terrell, who’s allowed a 46.4% catch rate and a 65.2 passer rating this season. Additionally, Lamb has out-targeted Cooper 28 to 26 over the last 3 games.

Williams has seen his role change over the last few weeks. After posting an average depth of target between 8-10 yards working as a true X receiver in Weeks 1-3, his ADOT has spiked to 14-16. Nonetheless, Williams faces a Vikings defense that is allowing the 4th highest deep pass rate in the NFL at 14.3% and is missing a bunch of key players.

Antonio Brown & Rob Gronkowski have already been ruled out for this matchup vs. Washington, who is the single easiest matchup in the NFL for WRs. We also have Chris Godwin listed as a game-time decision with a foot injury. Johnson provides much-needed salary relief this week and Evans presents a massive ceiling.

TE is one of the positions that I am seeking salary relief this week with no Darren Waller, Travis Kelce, George Kittle or Mark Andrews on the slate.

Freiermuth will be popular — but for good reason. Freiermuth’s role has been increasing each week over the last three games, culminating in his 3rd straight game with 6+ targets, a season-high 76% of routes, and a 2-TD performance on Monday night.Chase Claypool is out with his toe injury, and the Lions defense is exploitable through the air, ranking 29th in pass defense DVOA and 32nd in PFF coverage grade.

Up-tempo game environment for the Chargers.Despite Donald Parham scoring last week, Cook has a 14% target share to Parham’s 4% and runs 67% of the routes on the season. Cook makes for a cheap stacking partner with Justin Herbert.

Ben Roethlisberger leads the NFL in danger plays with 27 and is 2nd in the NFL with 24 interceptable passes.