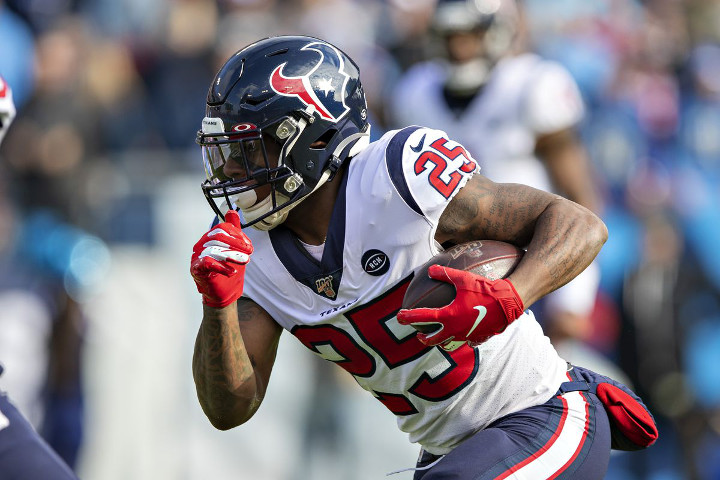 I mentioned Allen last week, and I’ll go back to him for a solid matchup against Arizona. With both Buffalo and Arizona ranking top-8 in Football Outsiders’ situation neutral pace, this environment looks conducive to fantasy goodness.

Of course, Allen’s shown us a high ceiling on several occasions. He’s hit 25 FD points 5 times; 30+ 3 times. In what looks like the highest-scoring game of the week (total of 56), Allen’s an easy sell.

Davis’ 32.1% projected ownership isn’t a surprise. He’ll return to his workhorse role with Christian McCaffrey sidelined. And despite a tough matchup against Tampa Bay, we know he can deliver in the passing game (he’s posted 5+ catches 6 times already).

It’s also worth remembering that the Bucs are without stud DT Vita Vea, who’s out for the season with a broken leg.

David Johnson's absence will force Duke into the lead role against his old team. If you’re on the fence here, consider the fact that high winds are expected in Cleveland come game-time. That figures to push the Texans towards the run.

Ultimately, Johnson looks like a safe bet for 15-18+ touches in a neutral matchup.

With Austin Ekeler and Justin Jackson out, the Chargers backfield remains a question mark.

Allen, though, provides a consistent playmaker. He’s caught at least 7 passes in all but 1 of Justin Herbert’s 7 starts. Plus, his primary slot role will keep him away from Byron Jones and Xavien Howard for a chunk of Sunday’s game.

McLaurin continues to supply an attractive blend of talent and volume.

Now he’s in a dome against a subpar Lions pass D. As long as Alex Smith is merely competent, McLaurin should deliver here.

Goedert saw only 1 target on 25 routes run back in Week 8. But that was his first game back from an ankle fracture and a high ankle sprain. With some extra time to rest following a Week 9 bye, I expect his role to return to a pre-injury level.

The Eagles are getting healthier with Jalen Reagor, Miles Sanders and Alshon Jeffery (likely) back. But Goedert’s rapport with Carson Wentz is strong, while we’ve seen this Eagles offense lean pass. That’s helped Goedert tally games of 9 and 8 targets across his 4 appearances.