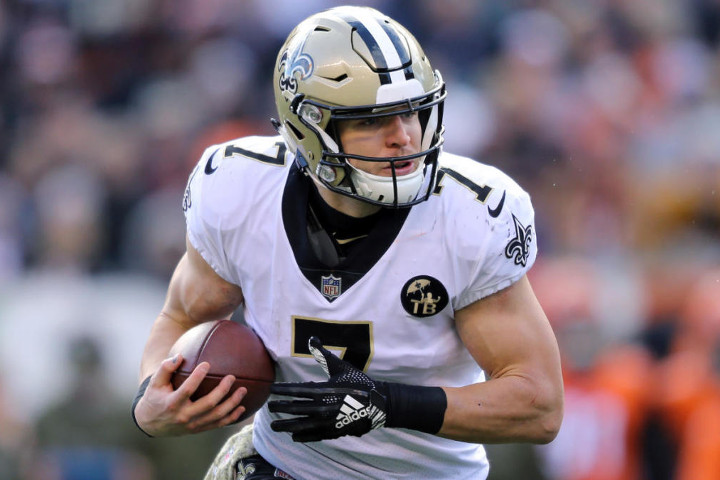 Week 11 is an interesting slate. We have no Seahawks, Cardinals, Chiefs or Bills — so a lot of our favorite plays aren’t available. And with all 11 games sporting an over/under between 45 and 51, there are no obvious spots to attack.

On top of all of that, the entire dynamics of the slate changed with the QB news out of New Orleans.

Let’s dig in and find the best values at every position.

I had Justin Herbert ($6,800) written up here — and then the Taysom Hill news dropped.

I have no idea what to expect from him as a passer, although the matchup is sweet vs. a Falcons squad sitting 28th in Football Outsiders’ pass defense rankings and dead last in adjusted fantasy points allowed to QBs.

But we’re playing Hill for the rushing production. A more athletic Tim Tebow, Hill has averaged 5.5 yards per carry over the past 3 seasons. I’d expect 10-15 carries from him on Sunday, giving him a rushing projection somewhere between 55 and 85 yards.

We don’t need a whole lot more on top of that for him to pay off this price tag in cash.

In a week with few sure things, Cook is the surest.

He ran into a tough Bears defense last week but still scored 15.2 DK points thanks to a whopping 30 carries and 4 targets. That feels like his absolute floor at this point.

The ceiling is lofty this weekend in a prime spot as a 7-point home favorite with a 27.25-point implied total vs. the Cowboys. Dallas sits 28th in Football Outsiders’ run defense rankings and has coughed up 4.8 yards per carry to RBs. Only the Texans have allowed more total rushing yards to opposing backs.

2020 has been a weird year — but recommending Ballage in cash takes the cake.

I’m still fairly sure that the guy isn’t good at football. But we just care about volume in fantasy football, and Ballage is coming off a game with 18 carries and 6 targets. Rookie RB Joshua Kelley has seemingly fallen out of favor, RB Justin Jackson is on IR and RB Austin Ekeler won’t be back this week. So Ballage is a relatively safe bet for another 15+ touches this week.

He draws a Jets defense that’s decent against the run. But because teams are usually playing with the lead vs. New York, the Jets have faced the 11th most RB carries per game. They’ve also allowed the 5th most RB catches. So they sit 27th in adjusted fantasy points allowed to RBs and 22nd in DK points allowed.

If this ship is going down, I’m going down with it.

But the usage was there. Johnson played 95% of Houston’s offensive snaps, ran a route on 74% of Deshaun Watson’s drop backs and handled all 14 RB carries. He saw just 1 target — but we saw him get 4 the week prior.

The game environment will be much better this Sunday at home for a Patriots squad ranked 31st in Football Outsiders’ run defense rankings and 32nd in RB coverage. New England sits 20th in adjusted fantasy points allowed to RBs.

It’s a grab bag of mid-priced WRs this week. I’ll be building the rest of my lineup and then seeing which combination of the following WRs fit:

10+ targets in 6 of his 7 healthy games this season. There’s nothing to worry about in Jacksonville’s secondary.

Averaging 8.4 targets per game. Boyd has the best matchup of the Bengals WRs vs. Washington slot CB Jimmy Moreland, who’s allowed a 69% catch rate in coverage this season.

Easily the biggest risk/reward play on this list. Cooper’s production has obviously taken a hit sans Dak Prescott. But I still think Andy Dalton can keep this offense afloat. Cooper posted a 7-79-1 line on 10 targets in Dalton’s only full game this year. Minnesota’s CBs are exploitable.

31 targets over the past 3 weeks. Now Meyers gets a Houston defense ranked 21st in adjusted fantasy points allowed to WRs.

We’re going back to the well after Goedert let us down last week with a 4-33 line. That has his price down another 400 bucks.

Goedert saw a decent 6 targets last week and ran a route on 84% of QB Carson Wentz’s drop backs. And that was despite leaving the game briefly to get checked for a concussion.

Goedert gets a sweet matchup on Sunday vs. a Browns defense that ranks 28th in adjusted fantasy points allowed to TEs. Only 5 teams have surrendered more catches to opposing TEs.

I’ll be playing Goedert even if TE Zach Ertz returns this week. Goedert racked up 17 targets alongside Ertz over the season’s first 2 weeks.

Only the Steelers, who are $1,700 more expensive, are a better sack bet on this slate.