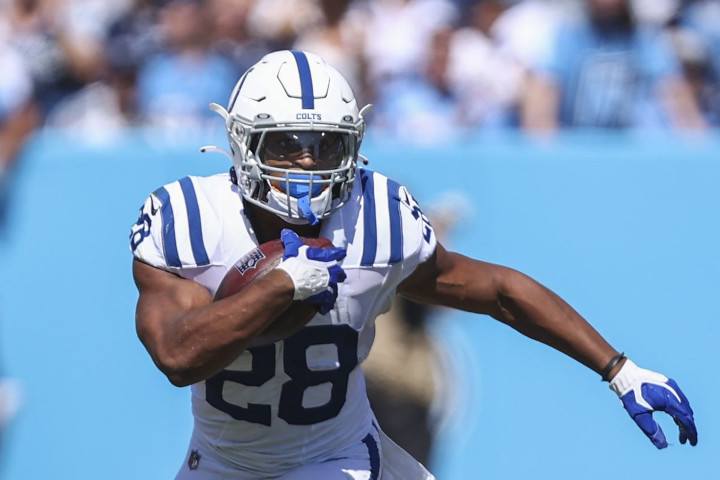 This week will be tough to navigate. This biggest decision point in tournaments is how to approach the Cowboys vs Chiefs. With an over/under of 56 points, this game projects to be the most popular game to stack and play pieces from. The question: do we fade this game and look for high ceiling plays elsewhere, hoping that the chalk misses? Or do we stack this game up and eat the high ownership?

We have plenty of QBs with high ceilings on the slate, so I will be opting to fade Patrick Mahomes and Dak Prescott with their high ownership projections, especially in small-field tournaments.

Even without DeAndre Hopkins, if Kyler is healthy for this game he has slate-breaking upside due to his legs and surrounding big-play weapons like Christian Kirk and Rondale Moore. The Cardinals check every box this week:

Much of the field will be paying up at QB.And if they pay down, Joe Burrow, Tua Tagovailoa and Derek Carr all expect to receive higher ownership than Jimmy G.

With Elijah Mitchell unlikely to play with his finger injury, the 49ers could opt to pass against the #31 pass defense in DVOA.Garoppolo threw 40 times against Green Bay without Mitchell in Week 3, and he’s easy to stack with Deebo Samuel, George Kittle or Brandon Aiyuk because those players create so much on their own. The 49ers are implied for 26 points per Vegas, and 98% of the money is on the over of 45.

It’s very easy to talk yourself out of playing JT this week. The Bills are the #1 most difficult matchup against RBs in adjusted fantasy points allowed. However, Taylor’s volume and play have transcended typical matchup analysis. Derrick Henry went for nearly 150 rushing yards and 3 TDs against this Bills defense in Week 6.Taylor has that capability regardless of matchup. Great players at low ownership are always strong tournament plays.

Dan Campbell took over the play-calling duties against Pittsburgh. That change saw Swift see career highs in usage across the board.

Even if Jamaal Williams returns to action, Swift hasn’t had a single game this season with fewer than 5 targets. The Browns matchup isn’t easy (12th in rush DVOA), but the volume Swift should see supersedes the matchup. Plus, we have Tim Boyle starting who could gravitate towards a safety valve like Swift in the passing game.

Dillon is the “free space” RB this week. With Aaron Jones out, Dillon should see a 70-80% opportunity share of the Packers backfield. Be sure to pair Dillon with a contrarian RB1 or 2 to help differentiate your lineup as he may see upwards of 30-40% ownership in small field tournaments.

Montgomery’s return before the bye week was very telling. He saw 15 of the Bears’ 19 RB opportunities while posting an 85% snap share and 73% route rate.That usage is a bargain at $5,500.It was also Montgomery’s first game back from a multi-week absence, when we typically see RBs eased in. Now after another week of rest, Montgomery is a great value play against a league average Ravens run defense.

Samuel is the perfect stacking partner with Jimmy G as mentioned above. He’s commanded the 2nd-highest target share among WRs this season (34%).Despite George Kittle’s return and Brandon Aiyuk’s increased usage, Samuel has commanded 14 targets and 5 rush attempts over the last 2 weeks. The 49ers' passing offense also has the biggest matchup advantage in DVOA against the Jags defense of any team on the main slate.

People may be hesitant to play Brown after last week's 1-catch dud. But Marshon Lattimore is the reason Brown didn’t see a high target total. In the 4 weeks prior, Brown saw 9 or more targets in every game. In recent weeks, the Texans defense has allowed true #1 WRs to feast, with Cooper Kupp going over 100 yards and a TD and DeAndre Hopkins going for over 50 yards and a score.

Lockett is always a great tournament play because he’s scored 29 or more DraftKings points 3 times this season and last. He scored over 20 DK points in both games against Arizona last season, including a monster 15-200-3 stat line in Week 7. He has slate-breaking upside in a bounce-back spot for the Seahawks.

DeAndre Hopkins has already been ruled out for this matchup. Kirk has seen 23% and 30% target shares the last two weeks without Hopkins and Kyler Murray.If Kyler plays, Kirk is a tremendous value this week.

Kittle has been a top 5 TE both weeks since returning from his calf injury and returned to 80% of the routes Sunday after being limited in Week 9 in his first game back. His 25.4% target share is the #1 rate among TEs this season.

Ertz has commanded 19% and 20% target shares in the last two games without DeAndre Hopkins on the field. Similar to Christian Kirk, if Kyler Murray plays this week, Ertz becomes likely to score in a matchup where the over is being heavily bet at 48 points.

Stone minimum on DraftKings, Bates allows you to play high-priced options at the other positions. With Logan Thomas and Ricky Seals-Jones both out, we can expect Bates to be the feature TE for Taylor Heinicke this week. He ran 85% of the routes in the 2nd half of last week’s game vs. the Bucs and caught 3 of 3 targets.

Home favorites against Taylor Heinicke, who leads all QBs in “danger plays” with 27 and ranks #2 with 26 interceptable passes.