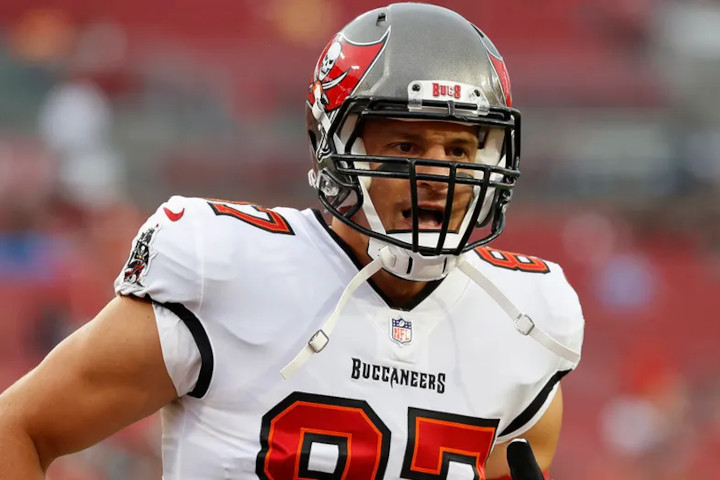 Newton went out last week and scored 26.2 DK points in his 1st start of the season just 10 days after joining the Panthers. He was efficient as a passer, going 21-of-27 for 189 yards and 2 TDs. He wisely targeted WR D.J. Moore and RB Christian McCaffrey on 56% of his passes. And, most importantly, he showed that he can still get it done with his legs, running 10 times for 46 yards and a score.

Newton is up $500 in DraftKings salary but still checks in as the top dollars-per-point value at QB. He gets a mediocre Dolphins defense that ranks 17th in adjusted fantasy points allowed to QBs.

We got full CMC last week:

McCaffrey scored 24.9 DK points, giving him 24+ in all 4 of his full games this season. He’s back to being the safest bet in fantasy football.

He’ll be out of consideration if Aaron Jones makes it back for Sunday’s game, so check Shark Bites for updates on that situation.

If Jones remains out, Dillon is too cheap for his projected usage. He played 75% of Green Bay’s offensive snaps last week, handling 11 of 15 RB carries and 6 targets (18% share). He scored 15.7 DK points despite not hitting pay dirt and game script working against him.

Dillon gets a Rams defense this weekend that ranks 18th in adjusted fantasy points allowed to RBs.

A salary saver at RB.

Michael Carter’s absence leaves New York’s backfield to Johnson and Tevin Coleman. My guess is that they’ll split carries close to 50/50. Over the first 2 weeks of the season, before Carter got rolling, Johnson out-carried Coleman 16 to 14.

But Johnson should dominate passing-game work. He’s been excellent in that department this year, hauling in 25 of 38 targets for 271 yards (10.8 YPC) and 2 TDs. Johnson ranks 13th among 46 qualifying RBs in yards per route run.

He’s also boosted by a matchup vs. the Texans’ 24th-ranked RB defense.

He’ll be a lock-button play if WR Mike Evans’ back issue keeps him out on Sunday. But even if Evans suits up, Godwin looks like a nice value.

Now Godwin gets a plus matchup against the pass-funnel Colts. Indy ranks 2nd in Football Outsiders’ run defense DVOA but 20th against the pass. And only 6 teams have been worse in adjusted fantasy points allowed to WRs.

Sunday’s matchup isn’t ideal vs. Carolina’s 5th-ranked WR defense. But the Panthers have struggled defending #1 WRs. In fact, Football Outsiders ranks them 31st in that department.

Pittman’s volume has been mostly underwhelming lately. But that’s largely because the Colts haven’t thrown it much. QB Carson Wentz has 30 or fewer pass attempts in 4 of the last 6 games.

Look for that volume to spike on Sunday. The Colts are 3-point underdogs against a tough Bucs run defense that usually forces teams to throw more than usual.

Pittman has maintained a healthy share of Indianapolis’ passing game, accounting for 22.6% of the targets on the season and 23.0% over the last 4 games. The Bucs rank 24th in adjusted fantasy points allowed to WRs.

Gronkowski scored 13.1 DK points on 8 targets in his return last week. He’s now seen 8 targets in 3 of his 4 healthy games this season and averaged 17.9 DK points. Only 3 TEs have tallied more expected PPR points per game.

So Gronk is getting excellent usage in a top-notch offense. The cherry on top: He gets the Colts’ league-worst TE defense on Sunday.

The Texans are up to 10th in Football Outsiders’ defensive DVOA. And they’ve scored 15.0 and 16.0 DK points in their last 2 games.

Do I think this is a good defense? Nah. But it’s not a disaster. And now they’re dirt cheap for a plus matchup vs. the Jets, who rank 30th in DK points allowed to DSTs.

QB Zach Wilson is back for New York, which looks like good news for the Texans D. Wilson has taken an average of 3.6 sacks and thrown 1.8 INTs across 5 full games this season.