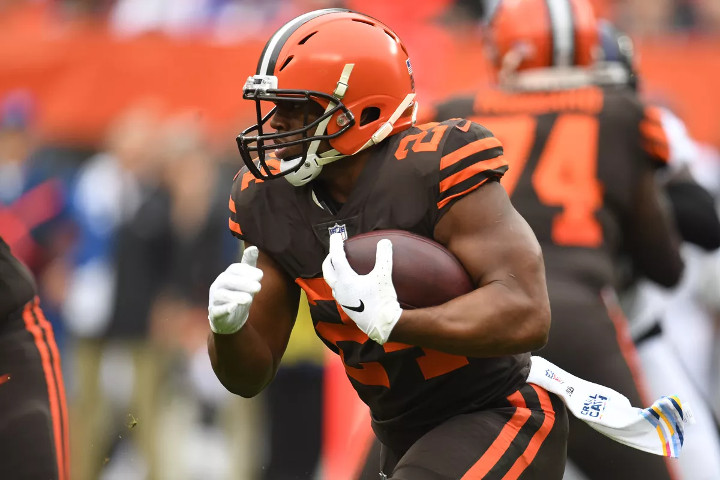 Coming off a monster win against the Bucs on Monday night, Goff gets an easier matchup against a 49ers defense that has suffered a multitude of injuries this season.

Goff tormented the Bucs defense last week as the Rams elected to throw the ball a whopping 51 times against a dominant Bucs rush defense. Goff was effective, throwing for 376 yards and 3 TDs — and I would expect a similar game plan this week going up against a defense that has given up the 9th fewest fantasy points to opposing RBs.

Goff will go low-owned as he should fly under the radar with DFS players more likely to click on Matt Ryan or Derek Carr priced just under him. Goff has sneaky upside depending on the game plan. If they elect to throw 50+ passes again, it could be another ceiling game for Goff.

Chubb missed over a month with an MCL sprain but has shown no ill-effects from the injury as he has surpassed 100+ rushing yards in each game since the injury against the Texans and Eagles.

Now, Chubb has a dream matchup against the Jaguars, who have given up the 5th most fantasy points to opposing RBs. The Browns figure to go run-heavy as TD favorites against the Mike Glennon-led Jaguars.

Chubb is priced as the RB6 on DK due to lack of receiving workload. But he’s a Derrick Henry type of player with elite upside and a chance for over 100+ yards and multiple scores in a juicy matchup.

I’ll be locking Chubb in to at least 25% of my GPP lineups.

Gallman is an excellent value this week priced at just $5,000 and having scored at least 1 TD in 4 consecutive games.

Gallman was the workhorse back in Week 10 against the Eagles as he ran the ball 18 times and was targeted twice. He finished the game with 18-53-2 and should have better efficiency this week going up against a Bengals defense that has given up the 13th most fantasy points to opposing RBs.

Gallman should be locked into a solid role as the Giants are favored by a TD against a team that is playing their first game without franchise QB Joe Burrow.

With an excellent price tag, Gallman will be in at least 30% of my GPP lineups.

Jefferson was popular last week and was okay with limited opportunities, catching 3 passes for 86 yards and a TD on just 5 targets.

Jefferson should see more volume this week with Adam Thielen on the COVID list and not much else at the WR position in Minnesota. Thielen also steals a ton of red-zone usage with a league-high 11 TDs, which enhances Jefferson’s chance for a score.

Priced as the WR11 on DK, I think Jefferson has plenty of room for upside assuming Thielen gets ruled out, allowing Jefferson to become the clear alpha in the Vikings offense in a matchup against the Panthers, who have no CBs to fear.

Priced as the WR18, Godwin is a solid value this week going up against a KC defense that was just flamed by the Raiders on Sunday Night Football last week.

Godwin missed a game with a broken finger but doesn’t seem to be hampered by the injury with 16 targets in his last 2 games for 13 catches, 145 yards and 1 TD.

Coming off a 10-target game against the Rams, I would expect around the same projection this week going up against the Chiefs as 3.5-point underdogs.

The Bucs have 3 viable WRs with Mike Evans and Antonio Brown also in the mix, so I’d expect Godwin to be extremely low owned with so many options in the Bucs passing game.

I expect a ton of points between the Chiefs and Bucs, so I’ll be making sure I get exposure to a bunch of WRs in this game.

Teammate Tyler Higbee didn’t practice Thursday due to an elbow injury and is being listed as a game-time decision for Sunday against the 49ers.

If Higbee doesn’t play, Everett figures to be out there much more and will be running more routes as the Rams featured TE. Priced at just $3,300, Everett would be an awesome value play at a position that has been shaky outside of Travis Kelce all season long.

Everett has just 1 TD on the season and has only cleared 50+ yards once but is an interesting option if Higbee gets ruled out. In that situation I would be willing to roster Everett in at least 15% of my GPP lineups.

I expect the Chargers will give up a lot of points to Josh Allen and the Bills. But Allen has been turnover prone throughout his young career and the Chargers have the personnel to apply pressure and accumulate sacks against the Bills.

The Chargers are the 7th cheapest defense on the slate and have mostly struggled with just 17 sacks, 5 INTs and 4 fumbles on the season. When Joey Bosa and Melvin Ingram are healthy, though, this is a team that can force a lot of pressure. We’re just hoping for a lucky special teams or defensive TD in a projected shootout.