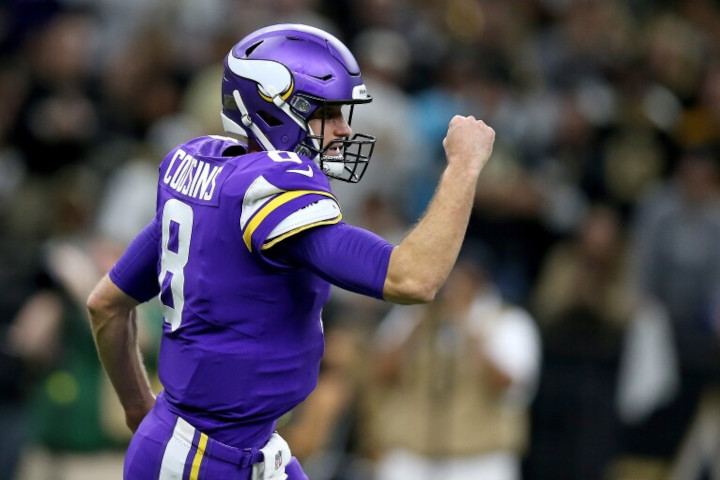 The Week 12 DFS slate is more challenging than usual. With 3 games on Thanksgiving, the main slate has been downsized to just 10 games and many of the top QB options aren’t available. With Dak Prescott and Josh Allen playing Thursday, Patrick Mahomes and Kyler Murray on bye, and Lamar Jackson and Russell Wilson playing primetime games, we may have to dig deep at QB.

This profiles as the 3rd fastest game on the slate.We’ve seen Cooper Kupp’s biggest games coincide with huge games from Stafford, as well. Kupp has the 4th highest matchup advantage of any WR in Week 12 and the 2nd highest on the main slate. Additionally, the spread of 47 points is attracting sharp action with 89% of the money on the over.Stafford’s last two outings may suppress his ownership.

Cousins is priced right below the top tier of QBs, which makes him an intriguing play. Kirk has thrown 2+ TDs on 35+ pass attempts in 4 of his last 5 games, despite some difficult matchups against CAR, DAL & LAC. Justin Jefferson is the only WR with a higher matchup advantage than Kupp.

With Cam Newton only $300 more, I expect Tyrod to be a great leverage play, as well as a great salary saver this week. Tyrod has rushed for at least 20 yards in all 3 of his full starts this season. Plus, the Jets have allowed 311 yards and 2.4 passing TDs on average over their last 5 games. Tyrod’s matchup profiles well for his legs and his arm.

The Bengals are allowing the 7th most adjusted fantasy points to RBs this season and 4th most over the last 4 games. They are also allowing the most targets to RBs this season at nearly 10 per game, due in large part to Najee himself posting 19 targets against them in Week 4. He also projects to garner the least ownership among the elite RBs this week (McCaffrey/Taylor/Ekeler).

In Week 2, Saquon saw a spike in his utilization to over an 80% snap share and nearly 75% of the team’s routes. We can expect a similar bump this week in his second game back from injury. The Eagles defense ranks 8th worst in adjusted fantasy points allowed to RBs.

Robinson has been able to perform despite two top 3 rush defenses in DVOA the last two games (Colts/49ers). This matchup profiles much better for Robinson with Jacksonville only being 2-point underdogs to a struggling Falcons team and facing a defense that ranks 5th worst in adjusted fantasy points allowed to RBs. Our projections have Robinson’s ceiling 4th highest among RBs.

Before the bye week, Williams out-snapped Melvin Gordon for the first time since Week 4. Historically, rookie RBs have seen an increase in their usage following their bye week. Even if Williams doesn’t take over this backfield entirely, he may see a modest increase in his usage similar to his former college teammate Michael Carter following the Jets bye week. The Chargers run defense ranks 32nd in DVOA.

Vikings OC Klint Kubiak discussed Jefferson’s lack of targets 2 weeks ago.Since then, he’s seen double-digit targets in back-to-back games (as well as 2 rush attempts). Jefferson’s primary matchups Josh Norman and K’Wuan Williams both have PFF coverage grades of 51. Recent performances will drive his ownership up, but his price should keep it from skyrocketing.

Jonathan Taylor stole the show last week for the Colts, leaving Pittman as the forgotten man. The Buffalo/Colts game had poor weather conditions (trust me, I was there), so it makes sense that the Colts leaned on the run. This week presents a pass funnel Buccaneers defense that ranks 11th most difficult for RBs with star NT Vita Vea returning but 9th easiest for WRs in adjusted fantasy points allowed. Teams are also averaging a 67% pass rate when facing the Buccaneers this season, which ranks 1st in the NFL.

Jones has no issue commanding volume.He has a 21% target share, 32% of the Jaguars’ air yards and 50% of the teams' end zone targets in 2021. However, the Jaguars have struggled to generate offense with Trevor Lawrence throwing for fewer than 175 yards in 3 straight games. The good news is the Falcons rank bottom 10 in both rush defense DVOA and pass defense DVOA, so generating first downs and points should come easier this week. The Jaguars/Falcons game also has the 2nd-fastest pace on the main slate.

Somehow the TE1 in fantasy points per game on the main slate is priced as the TE7. Gronk ranks #1 among TEs in target quality rating in 2021. His targets are accurate from Tom Brady and many come in high-value areas like downfield or the red zone. Even in his limited routes last week (59%), he was able to command 8 targets. His ownership will be high, but I’m eating the chalk and looking to differentiate elsewhere.

A direct ownership pivot away from Gronkowski. Higbee has run a route on 84% of Matt Stafford’s drop backs this season and 95% in each of the past 2 games before the Rams bye week. Usage drives ceiling for fantasy TEs and Higbee running a high percentage of routes for a top 3 offense in total DVOA is bound to produce a big game eventually.

The Jags defense has improved over the past 5 games. Matt Ryan has thrown 6 INTs, been sacked 11 times and fumbled twice in the last 4 games.