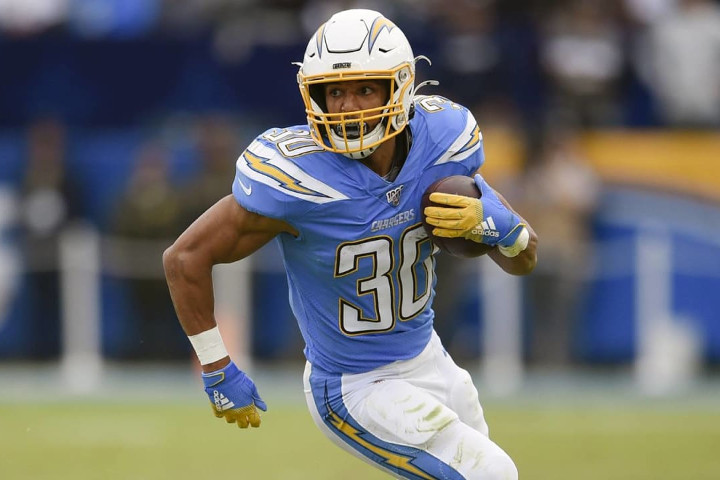 Sometimes you put together a good lineup and just don’t cash. This was not one of those times.

I think not playing QB Patrick Mahomes or WR Tyreek Hill last week was a mistake — at least with the roster construction that I used. Kansas City had easily the highest implied total on the slate. And we were fairly certain they’d go pass-heavy vs. a Bucs defense that’s much tougher vs. the run than the pass.

I could have played Hill here instead of Stefon Diggs without making any other changes. Or I could have found another $200 somewhere to get up from Josh Allen to Mahomes.

The Chiefs aren’t on the Week 13 main slate, so at least we can’t make the same mistake again. Here are the guys I’ll be considering at every position for cash games:

It’s probably a mistake that Rodgers hasn’t been featured here yet this season. The guy’s been freakin’ awesome, averaging 25.5 DraftKings points per game with 23.5+ in 9 of 11 outings.

The Packers’ 28.5-point implied total is tied for 3rd highest on the main slate. We have Rodgers projected to lead main-slate QBs in DK points, yet he’s priced as the QB5.

I’m leaning toward fading Dalvin Cook ($9,500) and Derrick Henry ($9,200) — and praying they don’t drop a 30-burger on me. Cook is “beat up,” according to OC Gary Kubiak, so there’s a good chance his workload is scaled back a bit this weekend. Henry is super expensive on a full PPR site for a guy averaging just 2.4 targets per game.

His price jumped $1,000 from last week — but he’s still too cheap if he’s gonna see anything close to the kind of volume he did vs. the Bills. Ekeler carried 14 times and hogged 16 targets, hauling in 11 of them for 85 yards. He tallied 23.9 DK points, despite not finding the end zone.

Ekeler had 4 and 11 targets in his first 2 games with QB Justin Herbert and is the best reception bet among main-slate RBs. This is a nice matchup, too, against a Patriots team that Football Outsiders ranks 28th in run defense and, more importantly, 25th in RB coverage.

Do I want to play Montgomery? Not really. But between his price, volume, matchup — and the fact that it’s a weak RB slate — he’ll probably sneak into my lineup.

Montgomery has averaged 14.1 carries and 5.4 targets in 7 games without RB Tarik Cohen this year. He’s coming off a 28.3-point outing in a plus matchup with the Packers and gets an even better draw this weekend. The Lions rank 23rd in Football Outsiders’ run defense DVOA and dead last in adjusted fantasy points allowed to RBs.

We have Montgomery projected fairly conservatively — 64 rushing yards, 3 catches, 21 receiving yards and .4 TDs. — and he still pops as the best dollars-per-point value at his position.

Woods rolls into this one with 27 targets over his last 2 games and 5+ catches in 4 straight. He’s scored 14+ DK points in 7 of 11 outings this season.

Woods has had a ton of success against the Cardinals lately, posting the following lines in their last 4 meetings:

Cooks likely would have appeared here even without the Will Fuller suspension. We’ll see how Houston’s offense fares without Fuller. You could argue that Cooks will struggle with more defensive attention.

But I’ll bet on his talent and, more importantly, volume. Cooks is already averaging 7.1 targets per game — and now Fuller leaves behind 6.8. He’s a good bet for double-digit targets at home for the Colts on Sunday, making him a smash value at this price tag.

Mims has seen strong usage, garnering 7+ targets in 4 of 5 games. And a bunch of those have come deep downfield. The rookie ranks 3rd among WRs in air yards per game over the last 4 weeks.

He’s also been a steadier fantasy producer than you probably realize, scoring between 10.1 and 10.7 DK points in 3 straight. So the floor is decent for the price. And the usage — combined with a plus matchup vs. the Raiders’ 20th-ranked WR defense — gives him a nice ceiling.

Rudolph came through for us last week with 13.8 DK points. We’re going right back to the well, assuming TE Irv Smith remains out with his back injury.

In 2 games without Smith this season, Rudolph has seen 5 and 8 targets and run pass routes on 79% and 76% of QB Kirk Cousins’ drop backs. He’s tallied double-digit DK points in both of them.

Rudolph gets a plus matchup on Sunday vs. a Jaguars defense sitting 22nd in Football Outsiders’ TE coverage rankings and 23rd in DK points allowed to TEs. The Vikings’ 31-point implied total is highest on the main slate, making Rudolph a nice TD bet.

The Seahawks ($3,300) have tallied 3+ sacks in 5 straight games and are big home favorites vs. Colt McCoy and the Giants on Sunday. They’re a nice play, but as usual, I’m looking to go cheap at DST.

Patriots beat writer Evan Lazar noted this week that the Pats and Dolphins, coached by former New England defensive assistant Brian Flores, have tended to have similar defensive game plans vs. common opponents this season. Miami held Chargers QB Justin Herbert to a season-low 187 yards on a season-low 5.8 yards per attempt back in Week 10. Look for a similar scheme from the Patriots on Sunday.