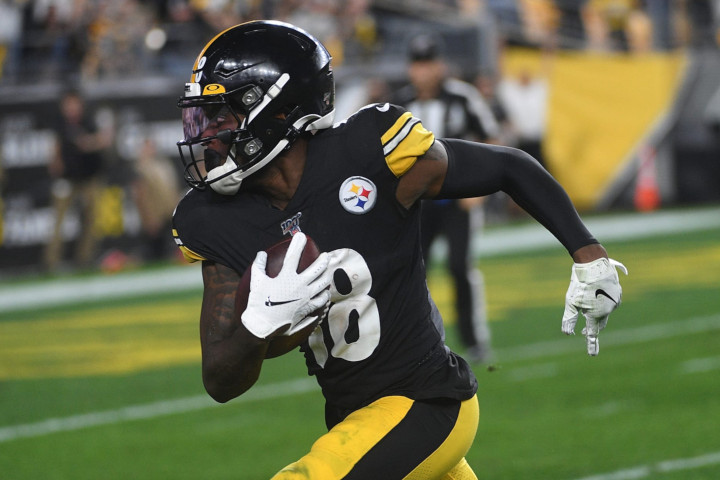 Depending on whether you want to pay up for Jonathan Taylor -- and whether we get $4,300 Sony Michel -- you can go expensive or cheap at QB.

Brady gets a Falcons squad sitting 29th in both Football Outsiders’ pass defense rankings and adjusted fantasy points allowed to QBs. Brady threw for 276 yards and 5 scores vs. Atlanta back in Week 2. And he posted 390-2-0 and 399-4-1 passing lines against them last season.

Tua is playing well, ranking 8th in Pro Football Focus’ passing grades over the last 6 weeks. He’s also producing nicely in fantasy, averaging 19.0 DK points per game over that span, with 16+ points in 4 of those 6.

The Giants are up to 7th in Football Outsiders’ pass defense DVOA. But teams are passing against the G-Men at the 5th highest rate in neutral situations, while Miami ranks 7th in situation-neutral pass rate. In other words, expect plenty of volume for Tagovailoa.

Tua might also get WR DeVante Parker back from his hamstring injury this week.

Update: Gardner Minshew ($4,000) now checks in as easily the top dollars-per-point value at QB. He has a dream matchup vs. the Jets' 31st-ranked QB defense and should add some value with his legs. I'll be using Minshew in my cash-game lineup.

Jonathan Taylor ($9,200) and Alexander Mattison ($7,600) are excellent volume bets in excellent matchups. But they sit just 7th and 5th among RBs in our dollars-per-point rankings. They’re good plays but not must plays.

Sony Michel ($4,300) will be a must play if Darrell Henderson misses Sunday’s game vs. the Jaguars.

So Conner projects for strong volume in a strong offense. And there’s nothing to worry about matchup-wise. The Bears sit 19th in Football Outsiders’ run defense rankings and will be without LB Khalil Mack and DL Akiem Hicks on Sunday.

Gibson is coming off a massive 29-carry, 7-target outing on Monday night. He tallied 26 and 19 opportunities in the previous 2 games. That shin injury he’s been dealing with is evidently in better shape now.

J.D. McKissic (concussion) is out for Week 13, so Gibson should pick up extra passing-down snaps while continuing to dominate carries. The matchup is nice, too, vs. a Raiders defense sitting 30th in adjusted fantasy points allowed to RBs.

After D’Andre Swift exited the Thanksgiving game, Williams played 74% of Detroit’s offensive snaps, handled 8 of 9 RB carries and saw 5 of 6 RB targets. He should dominate backfield work this weekend -- for a RB-centric Lions offense. Detroit RBs have combined to average 22.2 carries and 9.3 targets per game this season.

Williams also gets a plus matchup vs. the Vikings, who sit 29th in Football Outsiders’ run defense rankings.

Allen leads all WRs in PPR points over the past 5 weeks -- despite scoring just once during that stretch. He’s 2nd at the position in targets over the last 5, with 10+ targets in all of those games.

Sunday’s game has shootout potential vs. a Bengals defense that ranks just 19th in adjusted fantasy points allowed to WRs.

There’s not a safer target bet in fantasy football. Johnson has tallied 13+ targets in 3 straight games and 5 of his last 6. He’s reached double-digit targets in 8 of 10 games overall this season.

Johnson should be busy again on Sunday vs. a pass-funnel Ravens defense. Baltimore ranks 5th in Football Outsiders’ run defense DVOA but 24th against the pass. Not surprising, then, that teams pass on the Ravens at the 2nd highest rate in neutral situations.

Godwin draws a Falcons defense that ranks 24th in adjusted fantasy points allowed to WRs. He posted a 4-62-1 line vs. Atlanta back in Week 2 -- alongside Brown.

No reason to look elsewhere in DraftKings cash games.

The $3,600 Eagles check in as the top dollars-per-point value at DST. It’s extremely rare for an expensive DST to pop as the best value -- but the Eagles against Zach Wilson and the Jets project that well.

If you can’t bring yourself to spend $3,600 on a cash-game DST, consider Washington ($2,500). It’s not a great spot on the road in a game with a 50-point over/under. But the Raiders are a pass-leaning offense, and teams pass against Washington at the 4th highest rate in neutral situations. So we should get plenty of pass attempts from Derek Carr, which presents sack and INT opportunities.