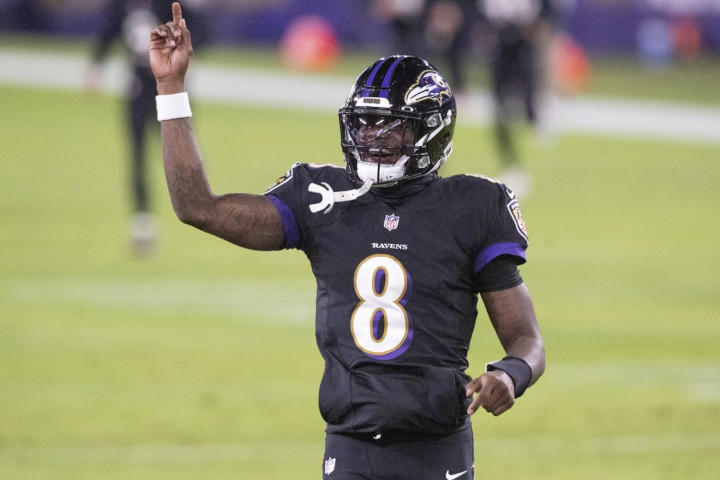 Last week presented limited opportunities to find great matchups and stacks. This week is the opposite. Multiple team stacks are viable this week, including TB, LAR, ARI, PHI, MIN, CIN and LAC. The key to being profitable this week in DFS tournaments will be picking which games to attack and which games to fade.

The choices are overwhelming this week.It’s very difficult to approach the QB position on a slate where there is no shortage of ceiling. Our projections have 8 QBs with a ceiling projection over 24 points.

I expect Jackson to see the lowest ownership of the elite QB options due to his high price. Yet in our projections, his ceiling projection is 2nd among QBs. The Steelers rank 29th in weighted DVOA this season, which puts more emphasis on recent play. Injuries and attrition have led to the Steelers defense allowing nearly 600 rushing yards over their last 3 games, which bodes well for Lamar. This is no longer a matchup we need to fear.

At the top of the list in our projections with 26.3 projected ceiling points is Hurts. Hurts just had his worst fantasy performance of the season, which may cause him to be overlooked in favor of other QBs in this price range.

The Jets are among the worst in the league against the run and pass, ranking 30th in Football Outsiders rush defense DVOA and 31st in pass defense DVOA. Hurts has rushed at least 7 times in every game this season and hasn’t failed to eclipse 55 rushing yards since Week 6 against TB.

Since Wilson has returned, the Seahawks have yet to score more than 15 points on offense. However, the 49ers are a pass funnel defense, ranking 2nd in rush defense DVOA but 22nd in pass defense DVOA.If the Seahawks do put up points in this game, it’s likely to come through passing production. A risky play, but could be a great differentiator if you play popular RBs, WRs or TEs this week.

Ownership this week is clustered at the top between Jonathan Taylor, Austin Ekeler, Joe Mixon, Alexander Mattison & Leonard Fournette, as well as great plays in the $6K range. Finding plays outside of those 2 price ranges was the thought process behind Mixon and Fournette’s booms last week and could be a viable way to differentiate this week.

If I’m spending up this week, I’m getting the best play of the week. The Texans run defense is 25th in DVOA.Back in week 6, JT averaged 10.36 yards per attempt en route to over 150 scrimmage yards and 2 TDs.

While Saquon didn’t have a monster game last week, he did regain his previous workhorse role:

He has a workhorse role with a tendency to break long runs. At sub 5% ownership, he is my favorite tournament play as leverage away from chalkier RBs in his price range (Eli Mitchell, Antonio Gibson, James Conner, Myles Gaskin & David Montgomery).

Even with Deebo Samuel taking some reps at RB last week, we saw Mitchell command a season-high 32 touches. Now with Deebo out, Mitchell is in line for a big workload against the Seahawks, who allow the 2nd most adjusted fantasy points to RBs. Antonio Gibson and J.D. McKissic had 49 combined touches, 202 total yards and 2 TDs against Seattle on Monday.

Sanders was the most popular play at RB last week at 32.48% ownership — and he failed miserably. Despite the injury last week, he put in full practices on Thursday and Friday and isn’t listed on the final injury report. Additionally, neither of his backfield mates — Boston Scott (illness) or Jordan Howard (knee) — have been at practice at all this week. Sanders sees the Jets, who’ve allowed the most adjusted fantasy points to RBs this season.It’s an even better spot for Sanders than last week.

Jefferson has received 30 targets over the last 3 games since the Vikings OC decided to feature him more. The Lions have been better than expected against WRs, but opposing #1s have been able to perform. They’ve allowed big performances to Deebo Samuel, Cooper Kupp and last week to Darnell Mooney. The Vikings also have the 3rd highest mismatch between their pass offense DVOA vs. the Lions' pass defense. 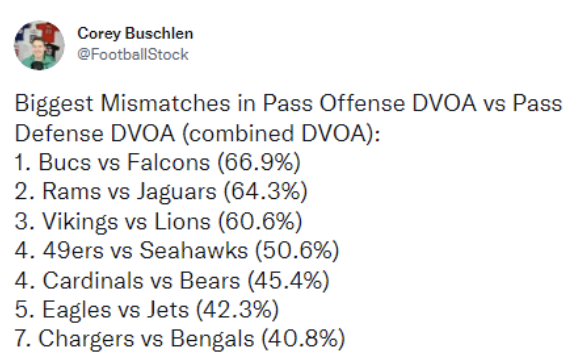 Along with Russell Wilson, Metcalf presents a similar leverage opportunity. Many players will be hesitant to play Metcalf due to the Seahawks' lack of scoring in recent weeks. However, Metcalf’s primary matchup according to PFF is Josh Norman, who ran a 4.61-second 40-yard dash nearly 10 years ago at the Combine. The speed mismatch alone is enough for me to take a shot on a long Metcalf TD this week. Additionally, Metcalf is the same price as Mike Evans, who projects to be one of the highest-owned WRs on the main slate.

Brown has 4 straight games of 10+ targets but has only managed 88 receiving yards over the last 2 games. Lamar Jackson is 3 of 18 on throws of 15+ yards in the past three, but before this stretch, he was completing 47% of throws beyond 15 yards. The Steelers rank 6th worst in adjusted fantasy points allowed to WRs and rank 26th in pass defense DVOA.

Smith has turned in solid fantasy production the past 4 games despite facing shadow coverage from Marshon Lattimore and James Bradberry the last two weeks and facing the Chargers and Broncos in the two games before that. This week he faces the Jets, who rank 32nd in weighted DVOA, playing as the single-worst defense in the NFL as of late.

Deebo Samuel’s absence leaves behind a 31.3% target share.Kittle should be the biggest beneficiary of that as the next highest target getter in San Francisco.

Since 2019, George Kittle has posted 7 games of20+ DK points. The Seahawks are currently allowing the 4th most adjusted fantasy points to TEs.

Moreau is expected to walk into a large role without Darren Waller in the lineup.With Waller sidelined in Week 7, Moreau played 100% of the Raiders snaps, commanded 6 targets and scored a TD. Expected to be the chalk at TE, if you play Moreau, you’ll need to differentiate in other places.

The Texans are quietly performing as a top 7 defense in weighted DVOA. They’ve allowed fewer than 21 points in 3 straight games and provide great leverage in case the Jonathan Taylor play misses. They also are at home against Carson Wentz, who ranks top 8 in interceptable passes.