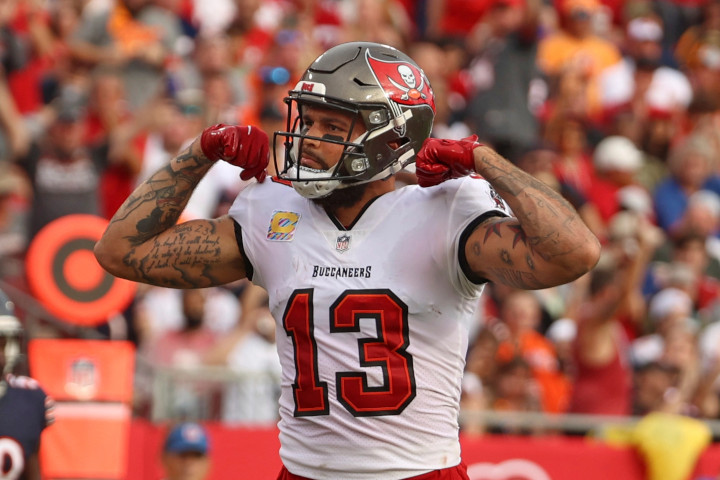 Taysom Hill ($5,600) and Cam Newton ($5,400) are nice values on the cheap end, although both guys come with risk -- Hill with the finger injury and Newton after getting benched last time out.

But there’s enough value on this slate that we can afford to pay up for an elite QB. Sunday’s Bills-Bucs game has shootout written all over it. And Allen projects for huge passing volume. His Bills are the league’s pass-heaviest offense. And Tampa Bay sits 1st in situation-neutral pass rate against.

Ekeler was a strong play this week even before the Chargers’ COVID issues at WR. He’s tallied 19+ DK points in 3 straight and 8 of 12 overall. Ekeler is averaging 12.4 carries and 5.9 targets per game -- and I’d expect both numbers to get a boost this week if Keenan Allen and/or Mike Williams are out.

Ekeler also has a sweet matchup against the Giants, who sit 31st in Football Outsiders’ run defense rankings and 25th in adjusted fantasy points allowed to RBs.

Jacobs ranks 6th among RBs in expected PPR points over the past 4 weeks, averaging 12.8 carries and 6.3 targets per game during that stretch. That includes a 13-carry, 9-target outing last week, when Jacobs played 85% of Vegas’ offensive snaps and ran a route on 73% of pass plays.

That workhorse usage should continue with RB Kenyan Drake now out for the season. Jacobs gets a Chiefs defense on Sunday that’s been better lately. But they’ve still coughed up 4.7 yards per carry to RBs over their last 4 games, including a 102-yard outing from Javonte Williams last week. Kansas City has also allowed the 7th most catches and 4th most receiving yards to RBs.

We’ll see if Washington gets J.D. McKissic back this week. His return would eat into Gibson’s target projection a bit. Remember, though, that Gibson racked up 7 targets in Week 12, when McKissic didn’t exit until late in the 4th quarter.

Gibson, of course, has also been a workhorse on the ground since returning from the bye week. He’s carried 19+ times in 4 straight games, averaging 23.8 over that span.

He’s had positive game script on his side in all 4 of those games, which might not be the case this week with Washington 4.5-point underdogs to Dallas. But even if we get something like 16 carries and 4 targets from Gibson, he’s a strong value at $6K.

Evans isn’t a prototypical cash-game play. Even this season, he has 3 games with fewer than 6 DK points.

But I love his spot this week. The Bills still haven’t been tested since losing top CB Tre White. The Saints didn’t have the horses at WR to take advantage back in Week 12. And the Patriots threw it 3 times in windy, snowy conditions on Monday night.

We know Tom Brady isn’t afraid to attack a defense’s weakness over and over again. Buffalo’s weakness is now CB Dane Jackson, the Tre White replacement. Look for Brady to go at Jackson early and often with Evans.

Only 7 WRs have scored more PPR points than Renfrow over the past 5 weeks. He’s averaged 8.2 targets, 7 catches, 72.2 yards and .4 TDs per game during that stretch.

Renfrow posted a 7-46-1 line on 9 targets against Kansas City back in Week 10. And that came alongside Waller.

We’ll see if WRs Keenan Allen and Mike Williams can get off the COVID list in time for Sunday’s game vs. the Giants. But unless both are able to play, Guyton and Palmer should be in for increased volume.

Guyton has already run a route on 63% of pass plays this season, so his playing time wouldn’t grow by much. But he would likely see a big increase from his current 6.8% target share. Guyton is a big-play threat, averaging 17.4 yards per catch for his career.

Palmer is the more natural Allen replacement. He’s already played 37% of his snaps in the slot this season. And his 10.0-yard average depth of targets is close to Allen’s 8.6. Palmer might actually bring a higher floor than Guyton -- assuming Allen is out.

Cook should also benefit from the shorthanded Chargers WR corps. He’s been more WR than TE this season, playing 65% of his snaps in the slot or out wide.

Cook has run a route on 65.5% of pass plays and seen a 12.4% target share this season. Both numbers should climb on Sunday vs. a middling Giants TE defense.

The Panthers easily top our dollars-per-point rankings. They’ve been a solid defense all season, averaging 6.8 DK points per game -- 6th among main-slate DSTs.

Carolina is a 2.5-point home favorite this weekend for a Falcons squad that’s allowed the most DK points to opposing DSTs.