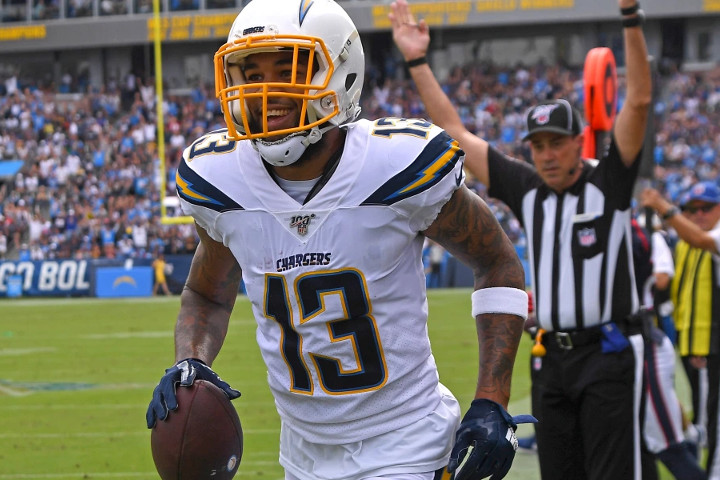 Priced as the QB7 on DraftKings, Herbert is an incredible option this week going up against the Falcons, who have allowed the 5th most DK points to opposing QBs.

Herbert has been amazing all season, so one bad game against a tricky defense in the Patriots does not scare me. I expect Herbert to have a monster game with over 300+ yards and multiple TD passes.

With one of the highest projected ceilings on the slate (25 points), Herbert will be my highest owned QB on the week 14 DraftKings main slate as I will look to roster him in at least 30% of my GPP lineups.

Ekeler was extremely high owned last week against the Patriots and let everyone down as the Chargers got obliterated 45-0.

Ekeler’s price decreased by $100 despite massive ownership. Now he gets a great matchup against the Falcons, who have given up the 8th most fantasy points to opposing RBs.

I think the Chargers bounce-back in a big way this week and Ekeler will have a major role in that. He ranks as the 2nd best points-per-dollar play in the Draft Sharks model.

With a projected ceiling of 22.4 DK points, Ekeler will be one of my higher owned backs in at least 40% of my GPP lineups.

Jones is a phenomenal GPP play once again in Week 14 as he should have some significant leverage against teammates Aaron Rodgers and Davante Adams, who have been coming in high owned each and every week.

The matchup and situation is pristine for Jones as the Packers are favored by a TD and the Lions have given up the most fantasy points to opposing RBs. The Lions just let David Montgomery score twice against them in Week 13, so Jones should have no problem paying off his price tag as the 4th most expensive RB on the main slate.

With slate-breaking upside in the best possible matchup, Jones will be in at least 30% of my GPP lineups.

Allen and the Chargers had a rough game in Week 13 against the Patriots as they were embarrassed 45-0. Allen, however, did have 11 targets and 5 grabs.

Assuming 10+ targets again, Allen could have a monster game against the Falcons, who have allowed the 3rd most fantasy points to opposing WRs.

I really like the spot for the Chargers offense this week as they should be fully motivated going up against a terrible defense in perfect conditions.

Allen is the best bet for target volume on the entire Week 14 slate besides maybe Davante Adams. He should be able to rack up 8+ catches and the 100-yard bonus against an inferior opponent.

Perriman comes in as the top ranked points-per-dollar play in the Draft Sharks model, priced under $4K in an elite matchup against the Seahawks and with teammate Denzel Mims out.

Mims had been leading the Jets in air yards by a mile, so this certainly boosts the ceiling for Perriman, who is also capable of running deep routes and making big plays down the field.

Perriman does have a 30+ DK point game on the season and should see elevated target volume with Mims out. The Jets are 2-TD underdogs and play a Seattle defense that has given up the most fantasy points to opposing WRs.

Thomas has meshed well with QB Alex Smith as Thomas was targeted 9 times last week against the Steelers, finishing with 9 catches for 98 yards and 1 TD.

Thomas finished as the 2nd highest scoring TE on the Week 13 slate in a tough matchup and should continue to shine as one of Smith’s top options in the passing game.

The matchup isn’t an easy one as the 49ers have been 3rd toughest against opposing TEs.

I think Thomas can overcome the matchup with a solid volume projection, accurate throws from Alex Smith and rock-solid usage in the red zone which enhances his chances for TDs.

The Giants are an exceptional value on DraftKings, priced all the way down at $2.6K in a home matchup against the struggling Cardinals.

The Giants defense has been impressive of late, holding 3 straight opponents under 20 points and limiting a high-flying Seahawks offense to just 10 points last week.

The G-Men were able to sack Russell Wilson 5 times last week and should have similar success against Kyler Murray and the Cardinals’ weak offensive line.

Murray has recently struggled as he was unable to accumulate 175+ passing yards in either of his last 2 games. He also threw a terrible pick 6 to the Rams last week and fumbled the ball twice.

I love the upside of the Giants at a very affordable price this week and I’ll be using them in at least 25% of my GPP lineups.