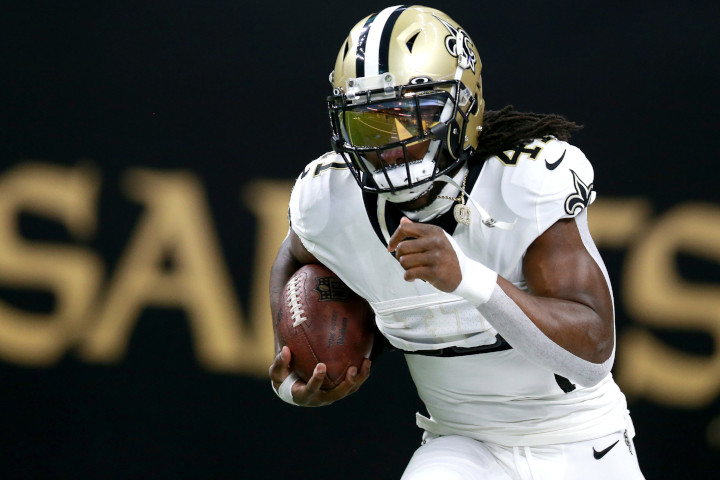 Last week we saw 5 games go over 50 points on the main slate and 7 teams score over 30 points. This week doesn’t project to be as high scoring, with only 1 game with an over/under above 50 and far less attractive stacking options to choose from. The key to tournament success this week will be spotting the “sleeper” games that may yield more points than Vegas is anticipating.

Easily the biggest decision point tournament players will have to make this week at QB is how to handle Bills at Buccaneers. I’m opting to fade Josh Allen on the road against a blitz-heavy defense.

This game environment sets up extremely well. Brady and the Bucs rank 1st in neutral pass rate (Bills rank 2nd), Brady averages 42 pass attempts per game this season, and the Bucs offense ranks 1st in pass offense DVOA. Even though the Bills are a top 5 defense, the Bucs at home with a 28.5-point implied total is hard to pivot away from. Brady can also provide leverage against Leonard Fournette, who projects to be one of the highest owned RBs this week.

The Washington defense is allowing the most air yards on pass completions this season.Prescott should have Amari Cooper as a “full-go” according to Cowboys reporters, marking the first time since Week 1 that all 3 of the Cowboys star WRs will be playing a full allotment of snaps in the same game. The Cowboy’s implied total has increased more than any team on the main slate opening at 23 points and climbing to 26.25 (4th highest).

The 49ers are a pass funnel defense, ranking 3rd in rush defense DVOA but 17th in pass defense DVOA. With Joe Mixon entering this game as a “game-time decision,” the Bengals will likely aim to expose the 49ers secondary with Jason Verrett on IR and Emmanuel Moseley out for this game. The last time Burrow faced a pass funnel defense was Baltimore (27th vs the pass, 5th vs the run) in Week 7.Burrow threw for over 400 yards and 3 TDs. Joe Mixon only carried the ball 12 times in that game.

The Jets are allowing the most adjusted fantasy points to RBs and the 2nd most receiving fantasy points (receptions, receiving yards, and receiving TDs). With Mark Ingram and Ty Montgomery on the COVID list, we should see Kamara revert to the 80+% snap share role he had before Ingram was acquired. Kamara seeing well over 20 opportunities in this matchup is simply too good to pass up.

The popular narrative recently has been that Elliott is “washed” or “done,” but following 10 days rest and Tony Pollard potentially out for this game, Zeke could be a very good contrarian play this week. The Cowboys are implied for 26.25 points against Washington, which bodes well for Zeke, who ranks top 3 in the NFL this season with 11 goal-line carries.

Chasing elite usage led me to David Montgomery last week.This week Barkley fits the bill. He’s exceeded 75% of snaps in 2 straight games, along with 70% of the team's routes and 14 targets. The issue for Barkley has been efficiency.This week he gets the 32nd ranked rush defense in DVOA. He also hasn’t scored a TD since his return from injury, and the Giants may get some of their WRs back healthy to boost the offense.

Hubbard posted one of his best games of the season against Atlanta the first time these two teams met. Without Christian McCaffrey out for the rest of the season, Hubbard expects to see 20+ opportunities against the 5th best matchup for RBs in adjusted fantasy points allowed and should be great leverage against Antonio Gibson and Javonte Williams, who are priced similarly.

The Raiders have a difficult time containing Hill. They play single-high safety coverages more than any team in the NFL. Hill went for 7-83-2 back in Week 10 and also posted over 100 yards and a TD last season against the Raiders. If Tyreek and the Chiefs have a chance to beat them deep, they’ll take it.

Chase faces a defense down their top 2 corners, and Josh Norman (his primary matchup) has given up 4 plays of 25+ yards this season. With Joe Mixon as a game-time decision in this game, we may see the Bengals rely more on the pass.The 49ers rank 14th in adjusted fantasy points allowed to WRs, before these CB injuries.

Before last week, Brown was on a 4-game streak of double-digit targets, including the Week 12 game vs. the Browns. The primary defender against Brown in that game, Greg Newsome, was added to the injury report on Friday with a concussion and has since been ruled out.

With both Jamel Dean and Carlton Davis healthy on the outside for Tampa, their most vulnerable position is over the middle to slot WRs. Russell Gage tallied 11 catches for 130 yards last week as the Falcons slot WR. With Davis on Stefon Diggs and Dean on Emmanuel Sanders, Beasley can exploit Sean Murphy-Bunting in the slot as Gage did last week.

Gronk is the TE1 in DraftKings points per game because his targets are high value. He leads all TEs in target quality rating because his average depth of target is 10 yards (2nd) and he averages a red zone reception per game.I’m okay eating the chalk on Gronkowski knowing that he has a high chance at a TD in this game.

A great stacking partner with Dak Prescott in a high implied team total game for Dallas. Schultz is still receiving elite usage among the TE position but has only scored 1 TD since Week 4.

To gain leverage on the field, I like fading Josh Allen this week and playing the Tampa Bay defense. The Bucs are home favorites against a turnover-prone QB who ranks poorly against the blitz, which is the primary game plan for the Bucs defense. 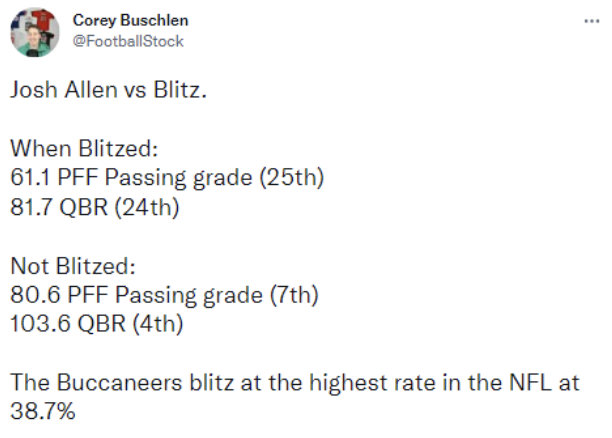