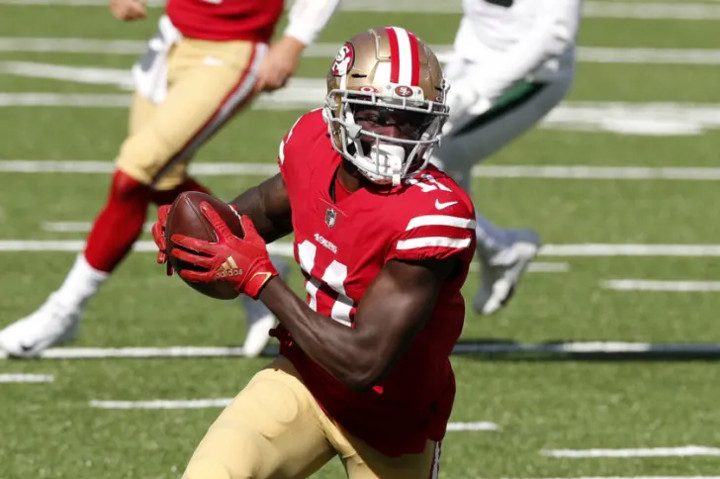 Editor's note: This article was updated after news broke that Drew Brees will return for Sunday's game vs. the Chiefs.

We’ll, of course, need to make sure Drew Brees remains out this week. And Michael Thomas’ status bears monitoring after he missed practice on Wednesday and Thursday with his ankle injury. But if Brees is out and Thomas in, Hill is a strong value at $6K.

He’s averaging 22.3 DK points across his 4 starts, with 20.9+ in 3 of them. The only exception was that funky game against the QB-less Broncos. And even in that one, Hill came away with 18.5 points.

The Saints offense will be forced to get aggressive to keep up with Patrick Mahomes and the Chiefs this weekend. (The game has a 51.5-point over/under.) The passing matchup is just OK for Hill — but the rushing matchup is sweet. The Chiefs rank 30th in Football Outsiders’ run defense DVOA and have allowed the following rushing lines to mobile QBs this season:

Update: Well, so much for Taysom in cash. The easy pivot would be down to Brees at $5,900. He doesn't strike me as a safe cash play, though, in his 1st game back from injury. Plus, Hill figures to still be annoyingly involved.

I'd like to get up to Kyler Murray ($7,000). The shoulder that bugged him for a few weeks is off the injury report, and he ran it 13 times last week. The matchup is good both on the ground and through the air against the Eagles.

If you wanna stay in $6K territory, I think Jared Goff ($6,300) is your best bet. While the Jets' offensive ineptitude might prevent a ceiling game, he has a nice floor vs. the league's 29th-ranked defense in adjusted fantasy points allowed to QBs.

Why did I not recommend Henry at $8,700 last week but am highlighting him now at $9,500? It has less to do with Henry’s projection and more to do with the rest of the RB pool. There were a handful of strong cash plays at the position last week. The pool is much weaker this time around.

So we’re going to pay up for what should be another big Henry game. He gets a Lions squad sitting 26th in Football Outsiders’ run defense rankings and 31st in adjusted fantasy points allowed to RBs. Detroit is coughing up 4.6 yards per carry to opposing backs.

Henry will be an even stronger play if the Lions are forced to go with QB Chase Daniel, making it more likely the Titans play with a lead. Tennessee is currently an 11-point favorite with a week-high 31.25-point implied total.

Akers has seen RB1 usage over the past 2 weeks, handling 50 of the Rams’ 58 RB carries and 4 of 9 RB targets. He’s set new season highs in snap rate and route rate in each of his last 2 outings, topping out at 79% of the snaps and 63% of the routes last week.

Now comes a plus matchup vs. the Jets. New York is actually decent against the run, sitting 8th in Football Outsiders’ rush defense DVOA and holding opposing backs to 4.1 yards per carry. But they rank 20th in adjusted fantasy points allowed to RBs because they’re almost always trailing and facing a bunch of carries. Only 7 teams have allowed more RB carries than the Jets.

So Akers is a strong volume bet this weekend. And he’s a strong TD bet with the Rams sporting a big 30.75-point implied total.

Who’s our 3rd cash-game RB? I’m honestly not sure as of Friday morning. It could be Kenyan Drake ($5,500) if Chase Edmonds sits with his ankle injury. Could be Jeff Wilson ($5,100) if Raheem Mostert is out with his ankle. Leonard Fournette ($4,500) is cheap if Ronald Jones is out and we get an indication that Fournette will lead the backfield vs. Atlanta.

Update: Our updated projections with Brees have Alvin Kamara ($7,400) 2nd in DK points and 1st in dollars-per-point value. The rushing matchup vs. the Chiefs is excellent -- and he gets a sizable boost in projected targets with Brees back. In Brees' 8 full games to open the season, Kamara averaged 9 targets, 7.5 catches and 70.6 receiving yards. The majority of that came without WR Michael Thomas. But Kamara is at least a strong bet for 5+ catches on Sunday.

It’s been interrupted by COVID issues, but Aiyuk is on a 5-game heater. He’s averaged 21.7 DK points during that stretch, scoring 19.7+ in all 5 outings. The rookie has seen 11.2 targets per game in those.

Aiyuk remains a strong target bet this weekend with WR Deebo Samuel and TE George Kittle out. He’s played 4 games without both guys (including last week, when Deebo played 1 snap) and posted the following lines:

The matchup is favorable, too, against a Cowboys defense sitting 28th in adjusted fantasy points allowed to WRs.

It’s time to take Hilton seriously after an ugly start to the season. The production has been big over the past 3 weeks: 17 catches, 277 yards and 4 TDs. More importantly, the usage has been strong. Hilton ranks 21st among WRs in targets (23) and 10th in air yards (301) during his hot streak.

Sunday brings a rematch with the Texans. I honestly don’t put much stock into Hilton’s career dominance vs. the division rival. But these things matter: Hilton posted an 8-110-1 line on this defense 2 weeks ago; Houston ranks 25th in adjusted fantasy points allowed to WRs; and Houston is missing top CB Bradley Roby.

Who we play at that 3rd RB spot will determine who we’re able to fit as our 3rd WR. I’ll add a name here by Sunday morning.

The rookie has seen 17 targets over the past 3 weeks. That might not seen like a big number — but only 9 TEs have topped it.

So Kmet is a nice volume bet for the price. The matchup looks negative on paper against a Vikings defense sitting 8th in Football Outsiders’ TE coverage rankings and 12th in adjusted fantasy points allowed to the position. But Minnesota will likely be missing primary TE stopper Eric Kendricks on Sunday.

It’s also worth noting that this could be a tricky spot for the Seahawks, who are traveling across the country for a 1 pm ET kickoff. They’re implied for a relatively low 25 points.