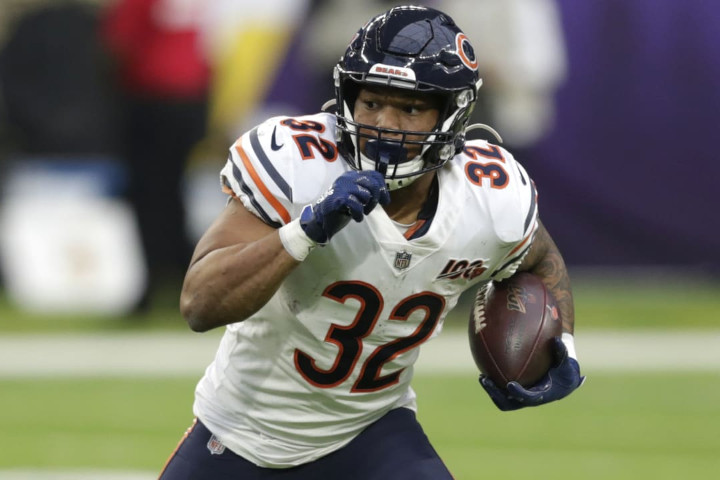 Hurts is on sale. This is his cheapest price of the season – and $900 cheaper than he was when he faced the Giants 3 weeks ago.

That includes a big 29.6-point outing vs. Washington this past Tuesday. Hurts ran for 38 yards and 2 scores in that one, so that ankle he hurt in Week 12 obviously isn’t an issue.

There are 5 strong cash plays at RB, so this is a week to build out the rest of your lineup and then see which combinations of these 5 guys fit. This is the order in which I’d prioritize them:

He’s in a nice spot this weekend against a Seahawks defense that ranks 31st in adjusted fantasy points allowed to RBs.

With Urban Meyer out of the way, Robinson stepped back into a workhorse role last week. He played 84% of Jacksonville’s offensive snaps, racking up 18 carries and 6 targets.

Factoring in price, Jones might have the highest ceiling at RB on this slate. In the 4 games Leonard Fournette missed all or most of last season, Jones averaged 19.5 carries for 102.5 yard and .75 TDs.

He’s just 4th on this list, though, because his floor is a bit shakier than the 3 guys above. Jones will likely lose snaps in obvious passing situations to Ke’Shawn Vaughn and/or Le’Veon Bell. And there’s at least a small chance that he makes an error (fumble, blown blitz pickup, etc.) that sends him to the bench.

Austin Ekeler remains on the COVID list as of Friday morning and is unlikely to play vs. the Texans on Sunday. Ekeler himself said that Jackson is the guy to use in fantasy lineups this week.

Jackson is Ekeler-lite: Explosive in the running game and a weapon in the passing game. With Ekeler limited by that ankle injury last week, Jackson actually led the Chargers with a 53% snap rate, carrying 13 times for 86 yards and catching his 1 target for 13 yards. RB Joshua Kelley played just 16% of the snaps in that one, finishing with 7 carries and 0 targets.

While there are a plethora of strong plays at RB, there are only 2 guys that really stand out at WR:

Fantasy’s #1 WR gets a Vikings defense that ranks dead last in adjusted fantasy points allowed to WRs. Fade at your own risk.

Any risk with Brown coming off a 9-week absence is negated by this price tag.

He’s averaged 8.4 targets across 5 games this season. And those all came with WRs Chris Godwin and Mike Evans, who won’t play this weekend.

Brown is a good bet for 10+ targets from Tom Brady vs. a Panthers defense that Football Outsiders ranks dead last in coverage against #1 WRs.

Cook has seen 4+ targets in 5 straight games, with 5+ in 4 of those. Expect a target boost on Sunday with RB Austin Ekeler and TE Donald Parham out. Those guys have combined to average 8.8 targets over their last 5 healthy games.

No standout play at DST this week, but the Bengals pop as the top dollars-per-point value.

That’s largely matchup-fueled. The Ravens have allowed a league-high 48 sacks this season, including 5 in their 1st meeting with the Bengals. Cincinnati, meanwhile, is tied for 3rd league-wide with 40 sacks.