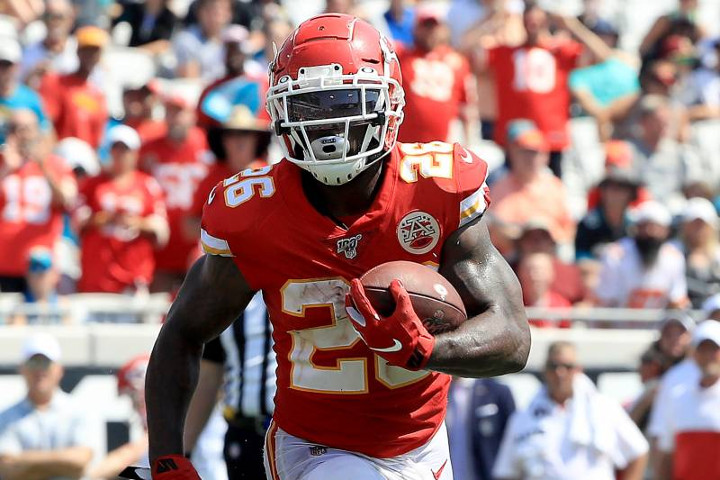 On a week when we need to worry about motivation for so many teams, let’s focus on teams we know will be going all-out to win. The Chiefs still have a shot at the AFC’s #2 seed and need to win to lock up the #3.

So expect Mahomes to be a full-go. Seemingly as healthy as he’s been in a while, Mahomes has tallied 26.7 and 25.4 DraftKings points over the past 2 weeks against the Broncos and Bears’ top-12 QB defenses.

He gets another top-12 defense in the Chargers this Sunday. But Los Angeles is down to 21st in Football Outsiders’ pass defense rankings and has nothing to play for. Expect Mahomes to stay hot.

Here’s another guy with everything to play for this weekend. A win gives the Eagles the NFC East title.

Despite a rag-tag group of WRs, Wentz has topped 21 DK points in 4 straight games. That includes a 23.9-point outing in his 1st meeting with the Giants, who rank 26th in DK points allowed to QBs and 28th in adjusted fantasy points allowed. Football Outsiders ranks the G-Men 31st in pass defense.

Even with TE Zach Ertz banged up, I like Wentz’s chances to return cash-game value at this price tag.

He’s been a major disappointment this season but has a chance to finish strong in a plus matchup against Detroit.

The Lions will be the 5th bottom-8 QB defense Rodgers has faced this season. The previous 4 included huge outings of 46.8 and 28.1 DK points. He scored 19.3 points in the 1st meeting with Detroit — but that came without WR Davante Adams.

At what will be minuscule ownership, Rodgers is worth a shot in tournaments.

Confession: I’ve lost money betting on the Browns passing game this season. So feel free to ignore this recommendation.

But I still strongly believe that the talent is there for this unit to explode in any given week. The matchup is right on Sunday against a Bengals squad that ranks bottom 11 in DK points allowed to QBs, adjusted fantasy points allowed and Football Outsiders’ pass defense DVOA.

The Redskins have been absolutely bashed on the ground over the past 3 weeks, with RBs combining for 495 rushing yards and 3 TDs on 7.1 yards per carry. That, plus QB Dak Prescott’s shoulder injury, should mean a busy and productive afternoon for Zeke.

Note, too, that Elliott’s passing-game volume has spiked lately. He’s averaged 6.5 targets, 4.8 catches and 39.5 receiving yards over the past 4 weeks.

We’ve been picking on the Panthers run defense for over a month now. We’re not going to stop this week.

Carolina has coughed up a pathetic 850 rushing yards and 10 TDs on 6.5 yards per carry over the last 5 games. Six different RBs have scored 15+ PPR points during that stretch, including big outings of 27.7 and 26.7.

Kamara got off the TD schneid last week and should keep rolling on Sunday.

Williams returned from his rib injury last week and immediately stepped back in as Kansas City’s lead back. He played 53% of the offensive snaps and handled 16 carries and 3 targets.

Note that in his 2 previous healthy games, Williams totaled 31 carries and 7 targets. So he’s a nice volume bet at this price tag, especially after RB Spencer Ware was placed on IR this week.

Williams also gets a plus matchup against a Chargers defense sitting 20th in DraftKings points allowed to RBs, 25th in adjusted fantasy points allowed and 23rd in Football Outsiders’ run defense rankings.

Battling the flu, Mixon clearly wasn’t himself last week in Miami. He ended up carrying 21 times but averaged just 2.4 yards per carry and played 43% of the Bengals’ offensive snaps.

Mixon is off the Week 17 injury report and should be back to the guy we saw the previous 7 weeks. That guy averaged 18.9 DK points per game, including a huge 30.6-point effort in the 1st meeting with Cleveland.

The Browns enter the rematch having allowed 5.1 yards per carry to RBs over the past 5 weeks. They’re down to 29th in Football Outsiders’ run defense rankings.

He remains underpriced relative to the volume he’s been seeing. Allen’s 140 targets rank 6th among all WRs. He’s tallied double-digit looks in 6 of his last 9 games and caught 5+ balls in 6 straight.

Allen closes the season against a Chiefs defense that ranks 2nd in DraftKings points allowed to WRs. But note that Kansas City has been a neutral matchup for slot receivers, allowing the 15th most points to that spot. Allen has run 52% of his routes from the slot this year.

Landry is on a 4-game scoreless drought. But he’s still averaged 8.8 targets, 5.5 catches and 62 yards over that span. He’s now seen 7+ targets in 9 straight games.

Landry draws a Bengals defense on Sunday that’s allowed the 6th most fantasy points to slot receivers this season. He posted a 4-76 line in the 1st meeting with the divisional rival (and was priced at $6,500 for that one).

He’s averaged 11.1 targets, 7.3 catches, 75 yards and .6 TDs since returning from injury in Week 9. Adams ranks 6th among WRs in PPR points over that span.

Next up is a Lions defense ranked 28th in DK points allowed to WRs and 30th in adjusted fantasy points allowed. Adams missed the 1st game vs. Detroit, but Green Bay’s WRs still combined for 171 yards and a score in that one.

He’d be a borderline lock at this price if QB Dak Prescott was healthy. Gallup has displayed big upside at home this season, with outings of 27.3, 25.8 and 17.6 DK points. Amari Cooper is clearly operating at less than 100%, which should continue to push plenty of action Gallup’s way. And he draws a beat-up Redskins secondary that just allowed 227 yards and 2 TDs to Giants WRs last week.

Prescott’s shoulder injury was definitely a problem last week, though. That adds risk to Gallup and takes him out of cash-game consideration. But his ceiling is worth gambling on in tournaments.

Higbee just became the 4th TE in NFL history to top 100 yards in 4 straight games, joining Tony Gonzalez, Jimmy Graham and Travis Kelce. Now he gets a Cardinals defense that ranks 28th in catches allowed to TEs, 32nd in yards allowed and 32nd in TDs allowed. Higbee’s hot streak started with a 7-107-1 line vs. Arizona.

It’s scary to build a lineup without Higbee in it this week.

Cook has been awesome since returning from injury, averaging 5.1 targets, 3.7 catches, 70 yards and .9 TDs per game. He’s averaged 15.9 DraftKings points per game over that span, topping 20 points in 3 of 7 outings. That stretch included a 6-99-1 line vs. Carolina.

He was a bit disappointing on the Saturday slate last week, catching 3 balls for 46 scoreless yards. But Howard saw another 7 targets in that one. He now ranks 8th among TEs in targets over the last 4 weeks — and 7th in air yards.

This unit has been a major fantasy disappointment this year. But the Bears still rank 9th in Football Outsiders’ defensive DVOA.

It remains a talented defense that’d be worth playing at this dirt-cheap price in any spot. The fact that the Vikings are considering resting starters in Sunday’s finale makes Chicago a lock for cash games.

Last week was just the 3rd time among the last 13 games that the Steelers defense failed to tally 11+ DK points.

Now they’re in a must-win game against a Ravens squad that will be sitting starters, including QB Lamar Jackson and RB Mark Ingram.

High-upside targets at every position for Week 2 FanDuel tournaments.

High-upside targets at every position for Week 2 DraftKings tournaments.

How many players from the Cowboys-Chargers game is too many in Week 2 DraftKings cash lineups?