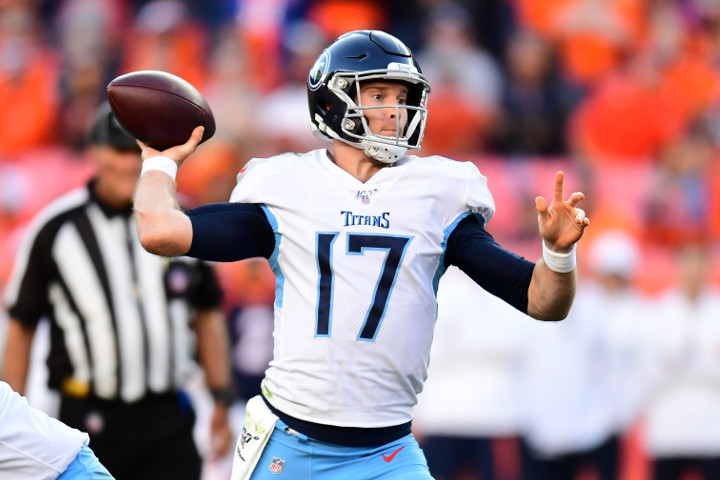 The Texans defense has been terrible all season, ranking 24th against the pass and worst against the run.

The Titans need a win to make the playoffs and clinch the AFC South and should be hungry after an embarrassing loss against the Packers in Week 16.

Tannehill is a high-upside GPP play as he has 4 games of 30+ DK points and offers some leverage as teammate Derrick Henry will probably come in very high owned against the Texans.

Brown ranks 1st in our dollars-per-point rankings as he should be in a workhorse role with Cam Akers and Darrell Henderson expected to be ruled out.

The Rams will probably lean on Brown as starting QB Jared Goff was ruled out with his thumb injury.

The Rams need to win to make the playoffs, and the coaching staff certainly trusts Brown more than QB John Wolford.

Henry is unavoidable this week against one of the league’s worst defenses. The Texans have allowed the most fantasy points to opposing RBs this season, and the Titans need a win to clinch a playoff berth along with the AFC South division title.

The Titans played the Texans in last year’s season finale and Henry ripped them for a 32-211-3 rushing line as the top RB on the slate.

Jarvis is ticked off this week as he was ruled out in Week 16 due to being COVID close contact.

The Browns make the playoffs with a win and are playing against an unmotivated Steelers team that will be resting starters.

Jarvis has been a target machine since Odell Beckham was lost for the season with target totals of 8, 9, 10 and 11 in his last 4 games.

Jarvis is better suited for DK scoring as he has just 3 TDs on the season but has 6+ catches and 52+ yards in each of his last 4 games.

Guyton is ranked 5th in the dollars-per-point rankings with teammate Keenan Allen ruled out from COVID and priced at just $3,400.

Guyton has shown some upside this season with 3 TDs and a season-high 91 yards in Week 15 against the Raiders.

Against the Chiefs in Week 17, Guyton has a chance to set a career-high in targets as the Chargers look to finish their year on a positive note with a 3rd consecutive victory.

In lineups where I use Justin Herbert, I will primarily be stacking him with TE Hunter Henry and looking for upside and long TDs with Guyton.

Kittle returned from a long absence last week to post 92 yards on just 5 targets and 4 receptions.

He didn’t play his usual allotment of snaps but looked like himself as he was explosive after the catch.

Kittle has been injured for most of the season but still has elite upside with a couple games over 100+ yards, including a massive game against the Eagles with 183 yards and a TD back in Week 2.

Kittle is the top TE in dollars per point. If we can project Kittle for 7-10 targets, I think he is the best TE value on the slate priced as the TE3 on FD but $1,100 cheaper than Darren Waller.

The Browns defense should dominate this week in a must-win matchup against Steelers backups. HC Mike Tomlin is electing to rest starters, and the Browns advance to the playoffs with a win over Pittsburgh.

As double-digit favorites against Mason Rudolph, the Browns defense ranks 1st in the Draft Sharks model with an excellent price tag of just $2,500.

The Browns have been an up and down defense all season, but they are capable of generating decent pressure with 7 games this season with 3+ sacks. They’ll be my highest owned defense and I’m expecting another game of 3+ sacks against Steelers backups.