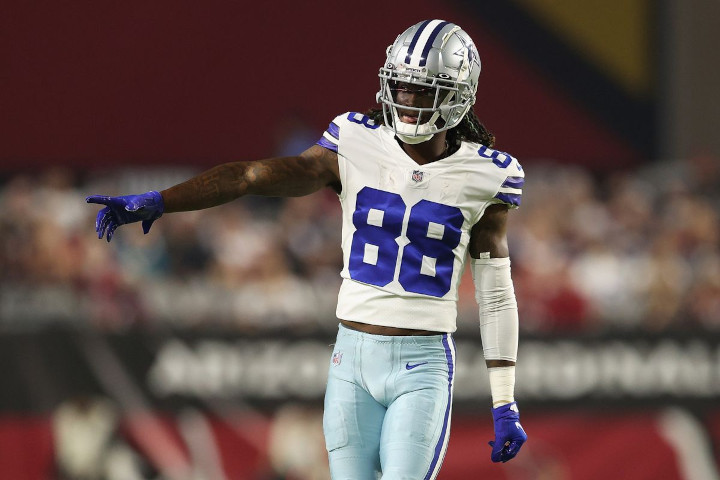 Herbert gets to face the bad defense. The Cowboys already looked like a unit to attack this season -- and then they lost DEs Demarcus Lawrence and Randy Gregory.

Although Herbert didn’t hang a big fantasy number in the opener, I loved what I saw from the Chargers offense. Herbert threw another Dart Party, WR Mike Williams thrived in his expanded role and the pass protection was awesome against a tough Washington pass rush.

Vegas is expecting a big day for the Chargers, who sport a big 29-point implied total -- 4th highest on the main slate.

I didn’t love Zeke’s performance in the opener. I’m also not a professional scout. And we knew the matchup was brutal against the Bucs.

The usage was certainly there for Elliott in Week 1. He played 84% of the offensive snaps and ran a route on 72% of pass plays. Elliott handled 11 of Dallas’ 14 RB carries (79%). He saw only 2 targets -- but that’s bound to climb if he continues to run so many routes.

Zeke is simply too cheap for a workhorse back in a strong offense in what should be a shootout vs. the Chargers.

Carson checks all the boxes we’re looking for in a cash-game RB.

He projects for nice volume after playing 79% of the snaps, carrying 16 times and seeing 3 targets in the opener. Those numbers might even get a boost this weekend with RB Rashaad Penny out with his calf injury.

The Seahawks are 6.5-point home favorites, so game script projects to work in Carson’s favor.

And Seattle is implied for 30 points -- 3rd highest on the main slate -- so there’s big TD upside.

I’m listing Harris last because I honestly don’t feel great about the play. Pittsburgh’s offensive line is a serious problem. Couple that with a clearly cooked Ben Roethlisberger, and this offense might really struggle.

But our process says Harris is a great cash play at this price. He played 100% of the offensive snaps in the opener, handling 16 carries and 3 targets (9.4% share). His Steelers are 6-point home favorites vs. the Raiders with a healthy 26.5-point implied total. Boxes: checked.

Let’s trust the process and go back to Harris for at least 1 more week. We’ll re-assess if he bombs again.

Volume in a likely shootout.

We’ve talked about the appeal of this Cowboys-Chargers game.

As for volume, there might not be a safer target bet at WR than Allen. After soaking up 13 targets last week, he’s now averaging 12.3 targets in 12 healthy games with QB Justin Herbert. Allen has seen 10+ looks in all but 1 of those games.

Lamb’s sophomore season got off to a bangin’ start: 7 catches on 15 targets for 104 yards and a score. He finished 2nd among WRs in our Expected Fantasy Points model.

If there’s a nit to pick, it’s that Lamb ran a route on “only” 77% of Dallas’ pass plays. That rate should climb with WR Michael Gallup out this weekend. In the 3 drives without Gallup last week, Lamb posted a 100% route rate.

There’s no standout 3rd WR for cash games. But both Bills are definitely in consideration.

Beasley racked up 13 targets in the opener, turning them into an 8-60 line and 14 DraftKings points. Dating back to last season, he’s now seen 7+ targets in 11 of his last 19 games.

Sanders scored just 9.2 DK points on a 4-52 line last week. But his usage was very encouraging. Sanders ran a route on 94% of pass plays, saw a 16% target share and ranked 6th among all WRs in air yards. He’s going to have some big games if that usage continues.

Fant’s 2021 got off to a solid start: 6 catches on 8 targets for 62 yards. He should get a boost in volume with WR Jerry Jeudy out. And the Week 2 matchup vs. Jacksonville is tasty. The Jags, of course, just gave up 291 passing yards and 37 points to the Texans.

Tyler Higbee ($4,100) is also a strong TE value but has a tougher matchup than Fant.

This is about as expensive as you’ll see me go at DST. But I don’t love the cheapies this week; the Steelers are easy enough to fit into lineups; and they’re in a smash spot.

The Raiders are traveling across the country for a 10 am PST kickoff on a short week after a Monday night game that went to overtime. Vegas also lost G Denzelle Good for the season in the opener and might be without G Richie Incognito on Sunday.

The Steelers defense, of course, just held the Bills to 16 points and racked up 14 DraftKings points.