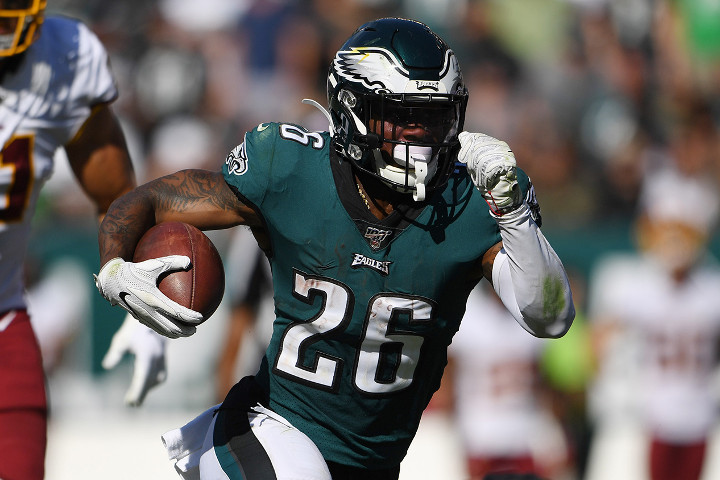 If you followed the picks in this article last week, you scored even better than my cash lineup above.

The injuries to Dallas’ offensive line got me off Dak Prescott on Sunday morning. And with the savings from going down to Kyler Murray, I moved from Aaron Jones to Derrick Henry.

My lineup still cashed all double-ups and 50/50s and won 95% of head to heads. So there will be dinner on the table this week. But my original cash lineup scored 227.7 points, which would have won some smaller-field tournaments.

Frustrating, for sure. But I don’t think my Sunday-morning changes were necessarily wrong. It looked like Dak would bust early in that Falcons game. And Kyler scored 33.14. The problem was Henry. But give me 25 Henry carries against the Jaguars and I like my chances. It just didn’t work out this time.

So I’m feeling good heading into Week 3. Let’s get to the picks …

So the expensive QBs actually present the most value. Russell Wilson ($7,300), Dak Prescott ($7,200) and Murray check in as the top 3 in dollars per projected fantasy point. You can certainly go up to Wilson or Prescott in what should be a shootout in Seattle. But I’ll at least be starting with Murray for a few hundred cheaper.

He’s provided elite rushing production so far: 91 yards and a score in the opener and 67 yards and 2 TDs in Week 2. The passing ceiling is elevated this Sunday in a mouth-watering matchup at home for the Lions, who rank 24th in Football Outsiders’ pass defense DVOA and might still be without CB Desmond Trufant (hamstring).

If you’re looking to save at QB, consider Wentz. He’s not the safest play coming off 2 ugly outings to open the season. But those came against a pair of top 8 teams in Football Outsiders’ pass defense rankings. Now he gets a home game vs. the Bengals, who rank 16th.

I’m betting on a bounce back for Wentz in this spot.

I won’t be making a lineup — cash or tournament — without Sanders this week. He’s at least 500 bucks underpriced based on what we saw in his 2020 debut last week.

Sanders saw elite usage in that one, racking up 20 carries and 7 targets. He played 77% of Philly’s offensive snaps and ran a route on 71% of Carson Wentz’s drop backs.

Now he’s in a smash spot at home for the Bengals, who have allowed a league-high 358 rushing yards to RBs on 5.5 yards per carry. Football Outsiders ranks Cincinnati 25th in run defense.

We profited by playing Aaron Jones against the Lions’ run defense last week. So we’re going right back to the well.

Drake gets the pleasure of squaring off vs. Detroit this weekend. The Lions have coughed up 6.9 yards per carry to RBs and rank dead last in Football Outsiders’ run defense rankings.

Drake has been splitting pass-catching work with RB Chase Edmonds. But he’s handled 36 of 45 RB carries. Only 4 RBs league-wide have more carries so far.

Like last week with Dak Prescott and Ezekiel Elliott, I like the idea of playing both Kyler Murray and Drake and likely soaking up all of Arizona’s TDs this week.

He already checks in 2nd among RBs in dollars per projected point — and that’s with Zack Moss still in our projections. The rookie has yet to practice this week due to a toe injury. If he doesn’t play against the Rams on Sunday, Singletary will become a borderline must play.

He’s tallied 19 carries and 10 targets through 2 games but has lost 17 carries and 4 targets to Moss. If Moss sits, Singletary figures to get similar volume to what he got over the 2nd half of last season: 16.4 carries and 3.6 targets per game.

More importantly for this week, Lamb has played 91% of his snaps in the slot. That’s the spot to be vs. the Seahawks, who have yielded a 9-114 line to Russell Gage in Week 1 and a 8-179 to Julian Edelman last week.

Volume has always been the only concern with Lockett. It doesn’t look like it’ll be a concern in 2020. Through 2 games, the Seahawks are the league’s 2nd pass-heaviest offense adjusting for game script. They are, as the kids say, letting Russ Cook.

Lockett has seen 8 looks in both of the first 2 games, producing 8-92 and 7-67-1 lines. He figures to find himself in a shootout vs. Dallas on Sunday. And Cowboys slot CB Jourdan Lewis 84th among 103 qualifiers in Pro Football Focus’ coverage grades.

Johnson is tied for 2nd league-wide with 23 targets, drawing a massive 31.5% of Ben Roethlisberger’s attempts. He might get shadow coverage from Texans CB Bradley Roby this weekend, but that’s not a matchup to run away from. Roby has allowed 8 of 9 targets in coverage to be caught through 2 weeks.

Through 2 games, Thomas has played 82% of Washington’s snaps and ran a pass route on 91% of Dwayne Haskins’ drop backs. Only 5 TEs have run more routes. And Thomas’ 17 targets are tied for 4th at the position.

He gets a Browns defense on Sunday that Football Outsiders ranks 23rd in TE coverage. Cleveland coughed up a 5-58-2 line to Mark Andrews in the opener and then 11 catches, 87 yards and a score to Bengals TEs last week.

Sample checks in as the top dollars per projected point value on the slate.

Joe Burrow has shown an affinity for his TEs so far, targeting them 21 times through 2 games. Sample is now Cincinnati’s clear lead TE after C.J. Uzomah’s season-ending Achilles injury last week. Sample racked up 6 targets after Uzomah exited that game with about 9 minutes left.

Week 3 brings a matchup against Philadelphia, who sits 29th in Football Outsiders’ TE coverage rankings. Logan Thomas posted a 4-37-1 line vs. the Eagles in the opener; then Tyler Higbee scored 3 times on them last week.

No QB has dropped back to pass more than Joe Burrow (112). We want our DSTs facing lots of drop backs because drop backs mean opportunities for sacks and INTs.

The Bengals are 4.5-point underdogs in Philadelphia this weekend, so game script will likely force Burrow to drop back a bunch again this Sunday.