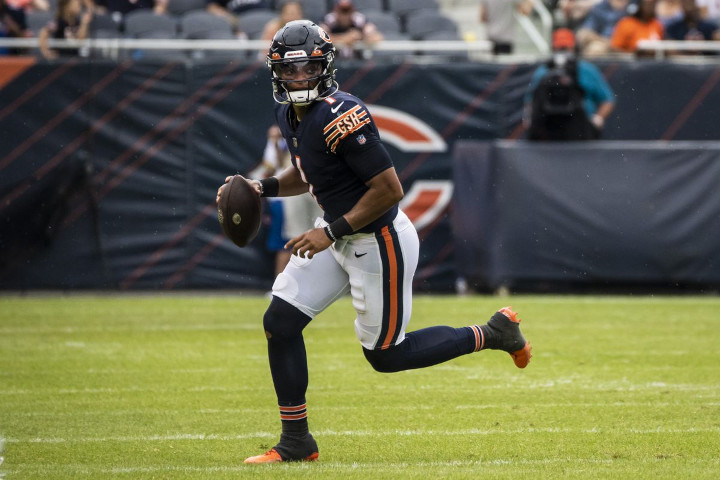 When we get a chance to play a cheap QB with rushing upside, we do it.

Fields is a 227-pounder with 4.4 wheels. He ran for 867 yards and 15 scores over 2 seasons at Ohio State. Fields’ athleticism immediately translated to the NFL field this preseason, when he racked up 92 rushing yards and 1 TD on 92 snaps (about a game and a half’s worth). He carried 10 times for 31 yards on 42 snaps last week.

Fields has been inconsistent as a passer so far and isn’t in an ideal spot to make his 1st start on the road vs. a talented Browns defense. But Cleveland has struggled so far, ranking 31st in Football Outsiders’ pass defense DVOA. And Fields certainly has plenty of potential as a passer.

Really, though, we’re playing him for the price and that rushing projection.

After seemingly being limited by that hamstring injury in the opener, Ekeler was unleashed in Week 2. He played 63% of the Chargers’ offensive snaps, handled 9 of 14 RB carries and racked up 9 targets. Ekeler even converted a 2-point try -- further confirmation that he’ll get goal-line action this season.

Ekeler tallied 22.5 DraftKings points in that one, without even scoring a TD. His price actually came down by $100 this week. And he gets a sweet matchup vs. a Kansas City defense that Football Outsiders ranks 32nd in run defense and 27th in RB coverage.

Ekeler ran for 93 yards and caught 4 balls for 55 yards against the Chiefs last year.

Mixon disappointed in the box score last week. But the usage remained elite: an 84% snap rate, all 20 RB carries and 2 targets. He ranks 2nd in carries (49) and 3rd in total opportunities (55) through 2 weeks.

His price sunk from $7,000 last week to $6,300 -- far too cheap for a guy with this kind of volume. The Steelers have remained tough against the run so far this season. But Mixon has had success against this defense, averaging 5.5 yards per carry in 6 career games vs. the division rival.

I’ve spent this week writing and talking about Edwards-Helaire’s underwhelming start to the season. He’s not playing well, ranking near the bottom of the league in most efficiency metrics. And the usage has been meager. CEH has 27 carries and just 3 targets through 2 games.

But DFS is a price-based game. And Edwards-Helaire is an obvious value at $4,800. We have him projected for a modest 13.4 DK points -- but he still checks in atop the dollars-per-point rankings by a healthy margin.

CEH gets a plus matchup this week at home for a Chargers defense that Football Outsiders ranks 28th vs. the run. Los Angeles has already allowed 3 RBs to score 13.8+ DK points this season (Antonio Gibson in Week 1, Ezekiel Elliott and Tony Pollard in Week 2).

QB Josh Allen has struggled early this season. But the ingredients remain in place for huge passing production in Buffalo. The Bills rank 1st in both situation-neutral pace and situation-neutral pass rate through 2 weeks. Translation: This is once again a fast-paced, pass-heavy offense.

When the passing game gets going, Diggs will be the primary beneficiary. He’s already racked up 21 targets -- tops on the team and 7th among all WRs.

Sunday presents a breakout opportunity for this passing game at home for a Washington defense that’s disappointed so far this year. The Football Team sits a middling 16th in Football Outsiders’ pass defense rankings and 27th in DK points allowed to WRs.

Allen remains 1 of the safest volume bets in the game and is now at his lowest DK price of the young season. He figures to find himself in a shootout in Kansas City on Sunday. Allen’s last 3 lines vs. the Chiefs: 7-96, 8-71-1 and 9-82-1.

This Tampa passing game might set records this season.

Godwin looks like the team’s most bankable pass catcher. He’s run a route on a team-high 98% of pass plays and garnered a team-high 18 targets through 2 games. He’s parlayed that into 27.5 and then 16.2 DK points.

Godwin might catch a good deal of Rams CB Jalen Ramsey this weekend. But he’s still underpriced for the opportunity he’s seeing in this high-flying offense. That opportunity will get a boost if WR Antonio Brown isn’t cleared from COVID by Sunday.

Hockenson’s usage says he should be much closer in price to Travis Kelce ($8,200) and Darren Waller ($7,400). He ranks 2nd among TEs in both targets and air yards -- ahead of Kelce. Hockenson and Kelce are the only TEs to top 20 DK points in both games so far this season.

Sunday brings a Ravens defense that Football Outsiders ranks dead last in TE coverage. Baltimore has opened vs. those other 2 elite TEs, coughing up a 10-105-1 line to Waller and a 7-109-1 to Kelce.

The Steelers are gonna be an offense to attack this season. QB Ben Roethlisberger looks washed, ranking 30th among 34 qualifiers in Pro Football Focus’ passing grades. And the offensive line is just as bad as we thought it’d be.

Now Big Ben is dealing with a pec injury -- and will likely be without top WR Diontae Johnson. The Bengals defense has played surprisingly well so far, ranking 7th in Football Outsiders DVOA. They’ve registered 3 sacks in both games, scoring 5 DK points in the opener vs. Minnesota and 6 last week in Chicago.