Our own Jared Smola neatly summed up where we’re at with Hurts in this tweet: 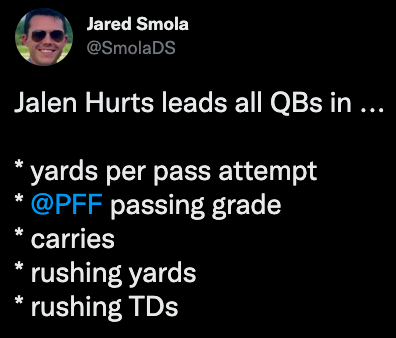 He’s fairly priced, and that’s reflected in his #1 ranking in $ per point.

If you’re looking to save a bit, I’m fine dropping down to Joe Burrow ($7500) in a bounce-back spot at the Jets.

Game script limited Cook to only 6 carries in a Week 2 loss to Philly. Back at home, he faces a Lions squad that’s a sub-par 23rd in Football Outsiders’ run DVOA metric.

Albeit on a small sample, no team in the league has allowed more fantasy points to opposing RBs than Detroit.

Fournette landed on the injury report with a hamstring injury, but he’s not in danger of missing Sunday’s game vs. Green Bay.

The Bucs, however, are on track to be without Chris Godwin and Julio Jones due to injury. Mike Evans, of course, will serve a 1-game suspension.

Now with Tom Brady potentially limited in his downfield passing, Fournette’s workload looks as secure as ever. He enters Week 3 with games of 23 and 28 opportunities (carries + targets).

The Texans enter Sunday as 2.5-point road underdogs in Chicago. Not ideal, but I’m willing to look past that following Pierce’s encouraging Week 2. That game — a road matchup with Denver — turned up 15 carries and 1 target. Backup Rex Burkhead didn’t record a single carry.

Now, Pierce certainly isn’t some cash game lock. But I do see him as a reasonable way to save money at your FLEX spot.

Diggs is simply underpriced. And it’s not just based off his Week 2 eruption vs. Tennessee. Gabe Davis is coming off an ankle injury, and the Bills are short-handed on defense.

So while Buffalo’s handled the Fins pretty easily in recent meetings, it’s hard to see that trend continuing. At $400+ cheaper than Davante Adams, Cooper Kupp and Justin Jefferson, Diggs is tough to pass on.

Higgins returned from a concussion last week to post 6-71 at Dallas. Next up is a Jets secondary that ranks 29th in Pro Football Focus’ coverage grades.

JuJu’s production dropped sharply from Week 1 to Week 2. But I see a rebound this week against a Colts unit that'll remain without ace LB Shaquille Leonard.

My hunch is the winless Colts keep this one close enough for 4 quarters of passing from the Chiefs O. If so, I think Smith-Schuster can pay off the discounted price.

If Keenan Allen (hamstring) is out again, Mike Williams ($7,000) should remain a strong option at cost. Just keep an eye on the status of Justin Herbert (ribs). Historical TD machine Adam Thielen ($6,000) is underpriced for his matchup with Detroit, too.

I expect Goedert to be the highest-owned TE this week. It’s partly because he projects out as a top-5 option in raw points. But for some reason, he’s also heavily discounted. The TE’s salary puts him 8th at the position.

In a plus scoring matchup with Washington, Goedert’s pretty close to a lock for me. Philly’s currently implied for 27 points — tied for 4th most on the slate.

The Bengals were a Week 2 letdown against Cooper Rush, but they’re worth going back to at a still-cheap price.

Joe Flacco’s already attempted 103 passes through 2 games — most league-wide. That’s exactly what we want our Team D to face, as it’ll create sack and turnover opportunities. Cincy enters the weekend as 6-point road favorites, boosting the case that Flacco’s attempts will remain elevated.