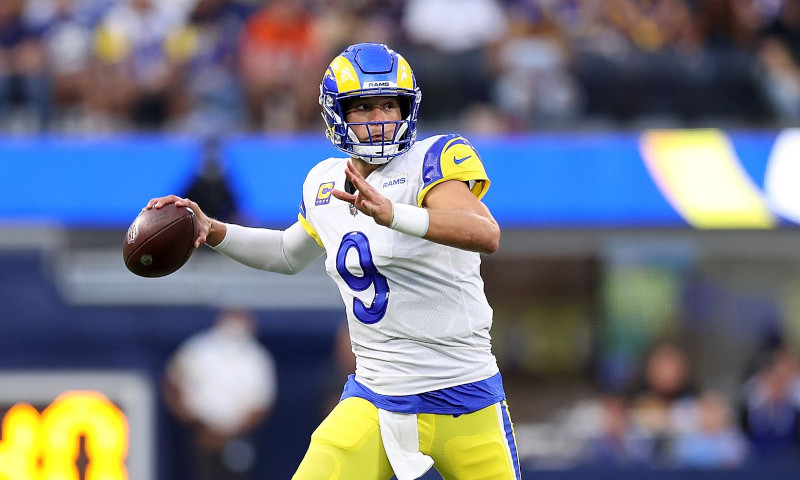 Last week was a tough one. A lot of the DFS community was loading the Chargers vs Cowboys game to no avail. When that game produced a mere 37 points, it dinged a lot of the DFS lineups we created. This week's game selection needs to be key. We’re starting to learn the roles and usage of some of these players. With more data than we had last week, hopefully, we can produce better results.

This Buccaneers vs Rams game currently has the highest over/under on the slate at 56 points. Stafford has been on fire so far this year and this Bucs defense presents a great opportunity for him to smash this matchup.

The Bucs gave up a league-low 80.6 yards rushing last year and have only allowed 57.5 rushing yards in their first two games this season. On the flip side, they’ve given up 342 passing yards per game (3rd highest) which will allow for Stafford to do damage through the air. I love Stafford at home this week, against an opposing offense that will run the score up on the other side, giving him plenty of opportunities to pass.

Hovering in that same price range, I like the idea of going back to Justin Herbert after his disappointing showing last week against Dallas. 41 pass attempts – 338 yards – 1 TD – 2INTs wasn’t what you were looking for if you “ate the chalk”, last week.

This should make him a lower-owned option than he should be in another potential shootout with the Chiefs in this game. A similar rationale to Matthew Stafford, we know that the Chiefs will put up points, I think Herbert will need to match Mahomes blow for blow in this one.This Chargers offense has only punted 2 times in as many games, they just need to improve in the RedZone this week (31st in RZ conversion rate) and the Chiefs' dead last red zone defense should help with that.

If you are going to spend up this week on FanDuel, Derrick Henry ($9,700) could have a monster game in a positive game script vs. the Colts and a banged-up Carson Wentz or backup QB. I’m personally going to opt for cheaper options because I love this middle-priced tier of RBs:

Saquon Barkley hasn’t hit his big game yet but his usage last week was an indication that this may be the week. From week 1 to week 2, Saquon jumped from:

Last week he had a tougher matchup against the Washington Football Team, this week he has the Falcons defense who is giving up points at will and allowing 21.5 FanDuel points to RBs (12th most) despite playing Miles Sanders & the Bucs backfield in their first two games. His ownership will be high because of his discounted price, but his ceiling is worth it.

In cash games, I wouldn't play Gibson because the Bills run defense has been very stingy. But in GPPs I like him this week. Everyone saw a primetime matchup last Thursday where he was phased out in favor of JD McKissic but are quick to forget that in week 1 Gibson saw 80% of the carries and a 26% target share en route to 25 opportunities. That should make him one of the lowest owned RBs in this range.

If Gibson can get into the end zone, I think he’s an excellent GPP pivot away from Saquon and Clyde Edwards-Helaire, who both project to be highly owned.

This is a big-time contrarian play. This is probably suited for large field GPPs only like the Sunday Million. But Robinson saw a similar bump to Saquon in his role from week 1 to week 2.

Robinson still maintained his role as the primary passing-down back running 64% of the Jags routes so far this season and taking a majority of long down and distance snaps. If the Cardinals score a lot (they will), then Robinson should have plenty of receiving opportunities. We haven’t seen Lawrence target Robinson heavily yet, but the Cardinals pass rush may force his hand.

Part of the reason I’m looking to differentiate a bit at RB is that I’ll probably be eating some chalk at WR.

Expected to be two of the higher owner WRs on the slate — and I don’t care. This is a pass-heavy/high-scoring game script and Kupp has the best matchup on the field in slot vs. backup nickel corner Ross Cockrell.

Kupp should be a monster yet again this week. I’m stacking Stafford/Kupp/Higbee and running it back with Godwin.

Godwin has a great matchup in his own right. With Antonio Brown likely out with COVID and Jalen Ramsey expected to shadow Mike Evans, according to PFF, Godwin is expected to see David Long. In 3-WR sets, Ramsey has been the slot corner (over 50% slot snaps), putting him in a match up with Godwin. But with Brown out for this game, the Bucs should use more 2-WR sets, leaving Evans matched up with Ramsey on the outside.

One of the biggest buys in fantasy right now. AJ Brown is receiving the usage you want, it just hasn’t translated to fantasy production quite yet. A 22% target share, 41% share of the Titans air yards, and 50% of the end zone targets will eventually translate into a spike week for Brown. After seeing what Tyler Lockett and Cooper Kupp did to this Colts defense in back-to-back weeks, AJ could have his bounceback at their expense.

Not listed on the final injury report, OBJ should be a full go this week. Again, this move is probably not wise in cash. But in GPPs, OBJ should have low ownership coming off of a torn ACL. In the games he played last year, he averaged a 25% target share and without Jarvis Landry, he could be the target funnel. Additionally, the Bears front has stifled running backs so far this year, so it may be a game that Baker needs to win with his arm.

Another good differentiation play for tournaments is to fade Rondale Moore (who blew up last week) for his teammate Christian Kirk. If you are going to stack Kyler-Hopkins, add Kirk to the build for maximum ceiling in this game. Christian Kirk is still running 68% of routes to Rondale’s 48% and commanding 31% of the Cardinals air yards which is more than Moore and Hopkins. Kirk presents a great opportunity to capitalize on people chasing last week's production.

With Mike Evans having a difficult matchup in this game and Antonio Brown likely out, this one could be the Gronk and Godwin show. Gronk leads all TEs in red zone and end zone targets with 6 and 3 so far in just two games. Great chance for a TD in this game.

Thomas is currently running a route on more drop backs than any TE in the NFL.

If the Bills offense gets back on track this week, there’s a good chance that Thomas catches a lot of passes in catch-up mode.

I don’t typically play road underdog defenses.But when I do, I’ll take a defense that is facing Ben Roethlisberger playing through a pec injury. Additionally, the Bengals have quietly been a respectable unit so far this season, ranking top 7 in DVOA and top 2 in rush defense DVOA.