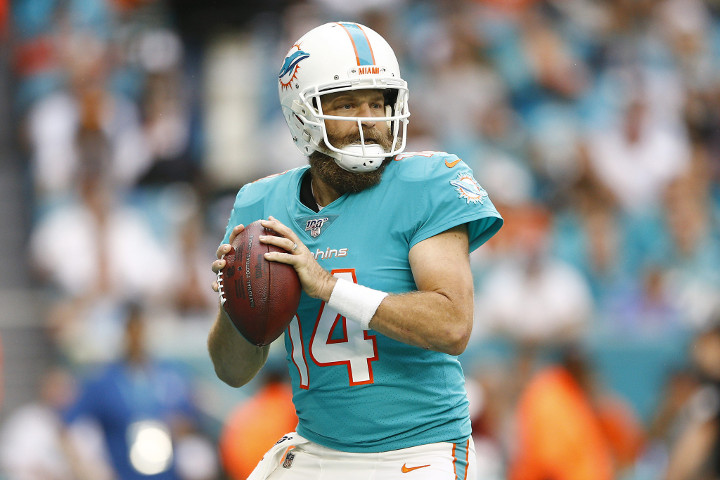 Sometimes I simply ignore the data and make plays based on what I think is going to happen in the game. The Ravens were absolutely embarrassed by the Chiefs on Monday Night Football and they are now favored by 2 TDs going up against the Washington Football Team.

Jackson has struggled in his past 2 games with just 17.56 FD points in Week 2 against Houston and 14.18 in Week 3 against the Chiefs. I think we see a vintage Lamar performance in this one with 4+ TD’s and over 35 Ravens points.

I am going to go overweight the field on Lamar and play him in at least 25% of my Week 4 GPP lineups.

Fitzpatrick may have the most egregious price among all QBs on the Week 4 slate. He’s been solid, scoring over 24 FD points in his last 2. Now he gets a historically bad Seattle pass defense that can’t generate pressure and is expected to miss stud safety Jamal Adams.

Amazingly, the Seattle defense has coughed up 450 yards to Matt Ryan in Week 1, 397 to Cam Newton in Week 2 and another 472 to Dak Prescott in week 3. The Seattle pass defense is absolutely horrendous and Russ Wilson has been a machine on offense, rendering Seattle as one of the best pass defenses to attack in the NFL.

Fitz also offers some rushing upside as he led the Dolphins in rushing yards in 2019 and has 15 carries for 68 yards and a TD this season.

Edwards-Helaire is an excellent buy-low candidate, coming off of a 25-touch game against a stingy Ravens defense. He managed just 20-64 on the ground but did contribute 5-70 on 6 targets in the passing game.

The Patriots are known to try to take away opposing teams’ top options, and in the past they have elected to double team both Tyreek Hill and Travis Kelce.

The Patriots will probably try to beg the Chiefs to run the ball by playing 2 deep safeties and keeping the Chiefs offense in front of them. This has led to big RB games for whoever the Chiefs have had out there with Kareem Hunt and Damian Williams having monster games against the Patriots in the last couple of seasons.

As the Chiefs’ clear workhorse RB, I think Edwards-Helaire has clear top 5 RB upside this week.

Davis played 76% of the snaps in Week 3 and led the Panthers in rushes, targets and receptions, finding the end zone on a screen pass from Teddy Bridgewater.

Davis has caught 16 passes in the last 2 games alone as he has a stranglehold on the lead job with Christian McCaffrey sidelined.

With Davis leading all players in broken tackles last week, the Panthers underdogs in Week 4, and Teddy loving to check down, Davis is shaping up as another top 15 fantasy RB in this week’s matchup against the Cardinals.

Cooper has been a target machine with 35 targets through just 3 games. I know we want TDs on FanDuel, and Amari has yet to find the end zone. But we all know TDs are volatile and Cooper has always had much more production at home in Jerry World.

That has been the case once again this season as Cooper went for 6-100 in the Cowboys’ lone home game against the Falcons in Week 2.

With this elite usage, the Browns giving up the 5th most fantasy points to opposing WRs and the Cowboys employing an up-tempo, high passing-volume offense, it is only a matter of time before Amari breaks out in a big way.

I will be looking to roster him in at least 20% of my GPP lineups.

Metcalf has repeatedly gotten behind the opposing defense as he even beat Defensive Player of the Year Stephon Gilmore for a long TD in Week 2’s win against the Patriots.

Metcalf had his first 100-yard game of the 2020 season last week against Dallas as he caught the game-winning TD late in the 4th quarter. It could have been an even bigger day for Metcalf, but he decided to slow up at the 2-yard line and was stripped from behind — an 8-point fantasy swing in the FanDuel box score.

Only 3 players in the NFL have more air yards than D.K. Metcalf and the matchup isn’t a scary one going up against the 20th ranked Dolphins pass defense.

The Dolphins were able to dominate the Jags last week, with Fitz throwing just 20 times and completing 90% of his passes. Now, the Dolphins project to throw the ball a lot more in Week 4 going up against MVP frontrunner Russ Wilson and the undefeated Seahawks.

Bolstering Gesicki’s Week 4 matchup, it looks like Jamal Adams will be unable to play due to a groin injury. The Seahawks defense has coughed up well over 400 yards of passing offense per game and Gesicki has an excellent floor/ceiling combo in Week 4.

Without even considering price, I think the Bucs are the top defense on the slate (along with the Ravens going up against the Washington Football Team). I give the slight edge to Tampa because they are at home and going up against rookie Justin Herbert, who has been careless with the ball.

With 11 sacks and 4 INTs in their past 2 games, I think the Bucs will make it a long day for the rookie QB.