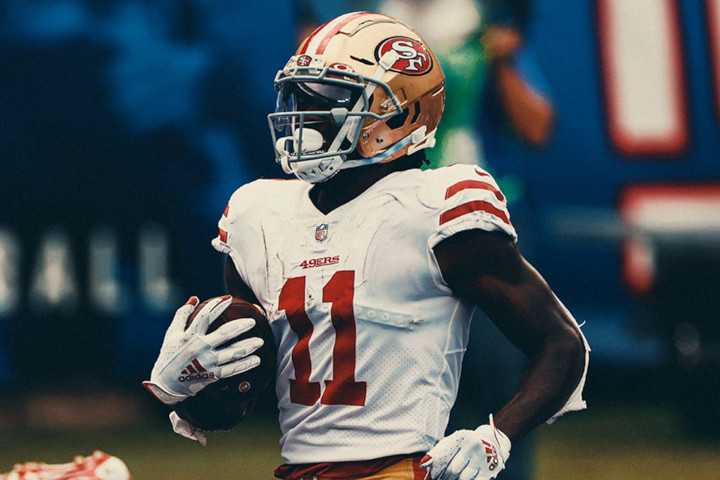 We now have 3 games worth of data from the 2021 season to shed light on usage, ability and defenses. Hopefully, that leads to more accurate DFS picks for all of us.

The rushing floor is alive and well with Hurts. Despite struggling as a passer on Monday night vs the Cowboys, the rushing ability combined with garbage time helped him post a top 10 QB finish. Hurts has run the ball at least 7 times in every game so far this season.

The Chiefs defense is currently 31st in the NFL at defending fantasy QBs, allowing over 25 FanDuel points per game. Currently the 2nd highest spread on the slate at 54.5, we know Patrick Mahomes will ensure that Hurts and the Eagles offense will need to keep scoring.

Rodgers has as high of a weekly ceiling as anybody on the slate but will fly under the radar due to some of the more sexy options around Rodgers’ price range like Dak Prescott, Matthew Stafford & Russell Wilson. A great example of leverage you can create away from those QBs.

The Steelers defense is still banged up and has not been great against the pass, allowing top 6 FanDuel points to WRs and top half of the NFL points vs QBs.

In GPPs you want to be looking for leverage. Although there is a risk that the 49ers can run the ball effectively against a putrid Seahawks run defense, this game projects to be high scoring with a 52-point over/under.

Playing Garoppolo allows you to go chalky at other positions. Many people are going to pay up for Russell Wilson/DK Metcalf/Tyler Lockett, but stacking the lower owned side gives you a big advantage in GPPs.

This is an eat-the-chalk week at RB.

Henry is in an absolute smash spot this week against a Jets defense that is the definition of a run funnel. The Jets offense is the #3 defense against fantasy QBs, #4 against WRs but #28 vs. fantasy RBs. With AJ Brown and Julio Jones out, I expect the Titans to run the offense through the Big Dog. He projects to be highly owned, but I think he’s worth it.

In GPPs, I always tend to go for bounce-back candidates from the week prior because you usually get an ownership discount.

This matchup for the Bears offense should be much more favorable. Instead of at Cleveland against a great front in their rookie QB’s first start, they are at home vs. the 0-3 Lions and a run defense allowing top 5 points to the RB position. The volume and usage are there for Montgomery, so I am firing him up in a great matchup.

A similar rationale to Montgomery, JT has left a sour taste in peoples’ mouths so far this season. The usage has also been quite good for Taylor, as the Colts are running the ball at above-average rates in all game scripts.

The problem is they have led in games for exactly 0% of the NFL season so far. In a game against Jacoby Brissett and a Miami Dolphins defense that allowed Peyton Barber to run all over it, I think JT has his first big game this week on the back of a lot of carries and a long run.

If you can get Adams for anything less than the most expensive WR, he’s a good play. As I mentioned with Rodgers, the Steelers defense has been suspect against the pass so far this season, allowing top 6 points to WRs. Adams has commanded a 37% target share this season and is nearly a lock for a TD, scoring 19 times in his last 17 games since Week 1 of 2020.

I’m fine eating the chalk here if I have the budget.

These two are classic examples of squeaky wheels. Both Ridley and McLaurin are commanding massive shares of their teams' targets/air yards and end zone targets, but have not yet produced high ceiling fantasy outings.

This game also is one that I think can be higher scoring (currently 48.0 over/under). Both defenses are in the top 12 of fantasy points allowed to WRs.

As I discussed above, Jimmy G plus these two in a potentially high-scoring game is a great way to differentiate your exposure to this matchup. This stack will become more popular if Kittle is out for this game, however.

We know what Samuel has done so far this season, commanding over a 35% target share.But Aiyuk got back on track last week, jumping from under 60% of the routes to 90% and seeing 100% of the 49ers’ end zone targets.

Tyreek Hill is a fine play this week, but I’d rather fade him and spend up on Kelce instead. The Eagles have been susceptible to the TE position — most recently to Dalton Schultz this past Monday night — but have held WRs in check. They’ve only allowed 14.0 fantasy points to WRs (3rd lowest) despite facing Calvin Ridley, Deebo Samuel, Amari Cooper & CeeDee Lamb.

This has “Travis Kelce game” written all over it.

Pitts hasn’t had his first big game yet, but I think this is the week. His route participation has been over 80% every game so far, peaking at 88% last week. He’s being used all over the formation: 24% of routes inline, 46% from the slot and 24% outside. Washington has been susceptible through the air (28th in pass defense DVOA), soI like Pitts to live up to his draft billing this week.

The Jets' offense can’t be any worse than they’ve been, but their defense has been quite good at limiting opposing offenses. The Jets are holding opposing QBs to the 3rd fewest fantasy points per game.And while Derrick Henry will likely run well in this game, the Jets are at home against a depleted passing offense. The Jets do have some playmakers on defense that can force some turnovers, as well.