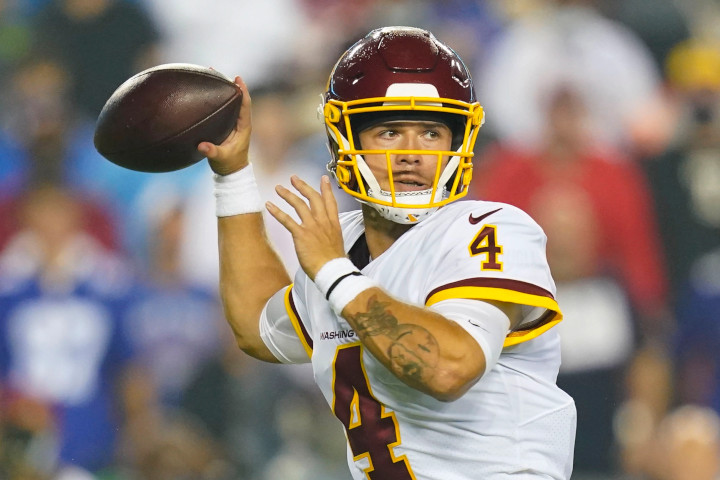 Kansas City at Washington should be a fantasy-point bonanza. Both defenses rank bottom 7 in points allowed, yards allowed and Football Outsiders DVOA. The game sports a 54.5-point over/under -- easily highest on the main slate.

Patrick Mahomes ($8,300) is obviously a great play, checking in as our top projected QB of the week. But we can save $2,500 by going to the other side of this game.

Heinicke predictably struggled vs. a tough Saints defense last week. But he topped 23 DraftKings points in each of the 3 games before that. He’s an aggressive passer and has also averaged 27.5 rushing yards across his 4 starts this season.

Since that tough Week 1 draw vs. the Bucs, Zeke has averaged 24.0 DK points per game. He’s scored 17.7+ in all 4 outings, with 23.3+ in 3 straight. Dallas has been the league’s 3rd run-heaviest offense in neutral situations over that 4-week stretch, feeding Elliott 18.5 carries per game.

Expect another run-centric game plan from Dallas on Sunday vs. a Patriots defense that’s tougher against the pass than the run. New England ranks 8th in Football Outsiders’ pass defense DVOA but 22nd in run defense. The Pats sit 24th in adjusted fantasy points allowed to RBs.

He’s become a staple in this article because DraftKings refuses to slap him with a fair price tag. Swift is the 11st most expensive RB on the main slate but ranks 6th in DK points. And he’s actually slightly underachieved vs. his usage. Only 3 RBs have tallied more expected PPR points.

Swift’s role is growing, with season-high snap rates the past 2 weeks (73% and 74%). He gets a Bengals defense on Sunday that’s allowed a league-high 41 RB receptions through 5 games. Cincinnati ranks 27th in adjusted fantasy points allowed to RBs.

Darrel Williams ($4,900) and Khalil Herbert ($4,600) are also viable as cheap, fill-in RBs. (And you could even play 2 cheapies.) But Booker brings the highest volume floor, which is what we’re looking for in cash games.

6th-round rookie Gary Brightwell and FB Elijhaa Penny are Booker’s only competition for work this weekend. He’s a safe bet for 15+ touches and has a shot to top 20.

McLaurin has averaged 11.3 targets on a huge 31% target share in those 4 games with Heinicke. Only 2 WRs have registered more expected fantasy points over that stretch.

Expect another big game from McLaurin on Sunday vs. a Chiefs defense that ranks 29th in adjusted fantasy points allowed to WRs and 26th in coverage against #1 WRs, per Football Outsiders. Kansas City has already allowed 6 WRs to score 19+ DK points.

Allen has been mostly frustrating through the first 5 weeks of the season. That gets us a discount on a major positive-regression candidate.

Allen sits 19th among WRs in PPR points but 5th in expected points. He’s actually 2 spots ahead of teammate Mike Williams in that latter metric and has out-targeted Williams 53 to 51. Simply put, Allen has vastly underachieved vs. his usage. That’s unlikely to continue.

His strong usage translated to strong fantasy production with a 20.9-point outing vs. the Ravens on Monday night. Pittman saw another 7 targets in that one, bringing him to 43 on the season -- 15th among WRs. He ranks 10th at his position in expected fantasy points.

So he’s simply too cheap for the volume he’s been seeing. The Colts probably won’t throw it a ton as 10.5-point home favorites vs. the Texans on Sunday. But Pittman should be a frequent target when QB Carson Wentz does drop back. And he should have no trouble vs. this Houston secondary.

Because that’s pretty much what we’re getting here with Ricky Seals-Jones, who stepped right into Thomas’ fantasy-friendly role last week. RSJ played 99% of Washington’s offensive snaps, ran a route on 87% of pass plays and racked up 8 targets (19.5% share). That’s elite usage for a TE.

The cherry on top is Sunday’s likely shootout vs. the Chiefs. Kansas City sits 27th in Football Outsiders’ TE coverage rankings and 31st in DK points allowed to TEs.

Minnesota has 1 of the better pass rushes in the league through 5 weeks, sitting 2nd in sacks and 3rd in Football Outsiders’ Adjusted Sack Rate.

The Vikings gets a Panthers offense on Sunday that’s allowed the 6th most sacks and ranks 24th in Adjusted Sack Rate Against. QB Sam Darnold has tossed a league-high 4 INTs when under pressure this season.