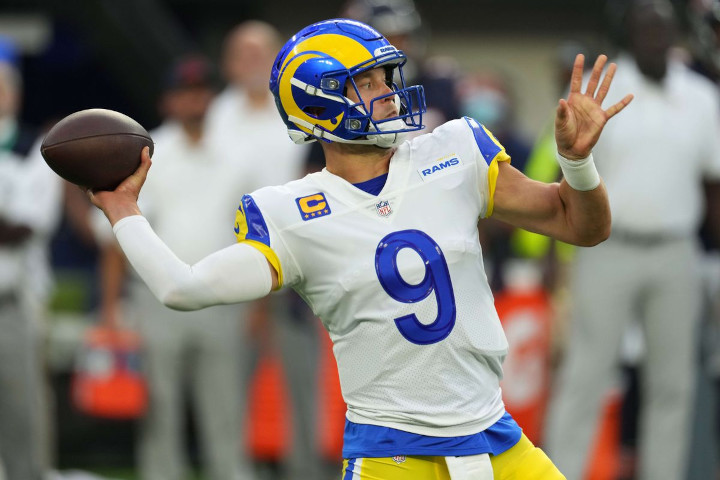 Despite seeing our first dose of bye weeks (SF, NYJ, ATL and NO), the main slate is chock full of great offenses this week. Similar to last week, we’re missing a few great offenses on the main slate such as Tampa, Buffalo, and Tennessee, so decision-making and game selection will be crucial.

Mahomes has by far the highest ceiling on the slate.The Chiefs are 7-point favorites in a game with a 55-point over/under, giving them an implied point total of 31 points.

Some will opt for the cheaper Taylor Heinicke ($7,300) to save salary, but if you can get up to Mahomes he’s facing a defense that currently sits at 29th in the NFL. Washington is also the only team (other than Chiefs) allowing over 25 FanDuel points per game to QBs (27.6 PPG).

Expected to be one of the higher owned QBs on the slate, I’m okay eating a bit of chalk with Stafford this week. Everything aligns for a big Stafford game.This game projects as the fastest-paced of the entire main slate with both teams under 30 seconds per play and a combined pace of only 58 seconds.

Stafford and the Rams passing offense also has the second biggest advantage of any offense on the slate in terms of pass offense DVOA vs. pass defense DVOA, per Football Outsiders. The Rams also have an implied point total of 29, the second-highest only to the Chiefs.

This one is contrarian because we haven’t seen a big spike week from Rodgers and the Packers offense in a few games. Rodgers is a phenomenal pivot away from some of the higher owned QBs, priced within $300 of both Matthew Stafford and Justin Herbert.He gives you a lot of leverage if he hits.

In GPPs we want high ceilings at low ownership.Rodgers threw 4 TDs in both matchups against the Bears last year — and we know he has the talent and weapons (read: Davante Adams) around him to help do it again.

Navigating the bevy of choices at RB will be the key to success in DFS this week. Zeke is a player that will be hiding in plain sight as a great play that will get overlooked because of Austin Ekeler/Dalvin Cook above him and D’Andre Swift/Jonathan Taylor/Kareem Hunt below. Zeke is currently the RB3 in half PPR due in large part to the Cowboys committing to the run game. He faces a Patriots defense that is a run funnel, ranking 8th against the pass in DVOA but 22nd against the run.

Nick Chubb has officially been ruled out with a calf injury, so we can expect Hunt to receive a 20+ opportunity workload (saw 16.3 carries and 3.5 targets last year without Chubb). He’ll be highly owned, but I’m fine playing him and limiting ownership in other places. The Cardinals have also been vulnerable to pass-catching RBs, allowing James Robinson and Darrell Henderson 6 targets each in recent weeks.

I’m going to keep playing D’Andre Swift until he’s priced as the top 8 RB he should be. The Bengals defense is currently allowing 51 targets to the RB position and the 6th most adjusted fantasy points overall to RBs.

Swift has posted a season-high in route rate and snaps in back-to-back weeks at over 70% in both categories with Jamaal Williams down around 15% routes and 30% snaps over the last 2 games.

Williams has outperformed Melvin Gordon in the box score in 2 straight tough matchups. So far this season we’ve seen Williams hover in the low teens in combined carries and targets. Facing a reeling Raiders team who just had their coach resign could present a run-heavy game script. This could be the Javonte Williams breakout game we’ve all been waiting for.

The stacking partner to every point I made above regarding Stafford. Kupp and his 33% target share this season should reap the benefits of a fast-paced, mismatch of the Rams offense against the Giants defense. His TD production may have fallen off in the last 2 games, but the elite usage is still present.

Baltimore has been most vulnerable in the slot, with Tavon Young allowing 15-151-1 on 18 targets this season in coverage. This looks to be a get-right spot for Allen with Mike Williams having the tougher matchup on the outside and being banged up coming into this game. Despite Allen being overshadowed by Williams, he’s still commanding over 10 targets per game and has yet to have less than 8 in a single game.

As discussed throughout this article, I will be targeting this fast-paced, Rams/Giants matchup. With Shepard returning from injury, no Darious Williams on the outside for LA, and Kadarius Toney likely seeing a lot of Jalen Ramsey in the slot, Shepard set up for a big game in this one.

If he doesn’t do it this time, I’m done. Running nearly 90% of the Browns routes and commanding a 22% target share since returning in Week 3, he’s due for a get-right game.

It’s rare to find such a high target share (25%) available for less than $7K, let alone less than $6K. Houston’s defense has been solid, ranking top 10 in pass defense DVOA.But Desmond King is the primary matchup for Pittman, according to PFF, and he’s allowed an 83.3% catch rate and 124.5 passer rating on 24 targets in coverage.

The one time I’ve spent up for Kelce it burned me. But I’m ready to try again. The Washington defense is bottom 5 against the run and pass. I want pieces of this matchup and the 55-point over/under it presents.

The Raiders are currently giving up the 5th most adjusted fantasy points to TEs.Fant is coming off a game that saw him break Week 4’s season-high 86% of the Broncos routes by running 91% in Week 5, the most among TEs. Fant has been a consistent target hog but has yet to have a blowup game.This could be the week.

The Vikings defense ranks top 10 in DVOA and they face Sam Darnold, who ranks #4 in turnover-worthy plays with 8 this season. This game also has a lower over/under of 46 points.