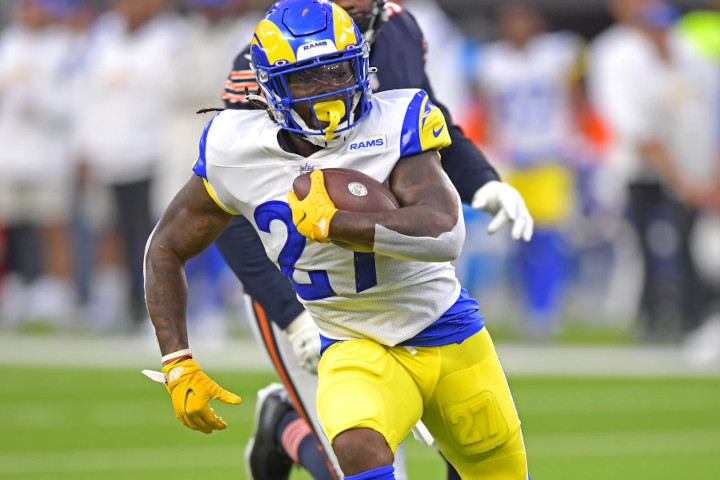 This is a week to pay up at QB, with the elites all in good spots.

Patrick Mahomes ($8,400) checks in as the top dollars-per-point value in a matchup vs. the Titans’ 32nd-ranked defense in adjusted fantasy points allowed to QBs. But lineups work better if you go down to the mid-to-low $7,000s.

Lamar Jackson ($7,400) is my favorite floor/ceiling combo. He’s sitting on a career-high 281 passing yards per game and just added WR Rashod Bateman to his arsenal. Jackson gets a Bengals defense on Sunday that ranks 22nd in adjusted fantasy points allowed to QBs. And he’s dominated the division rival on the ground, posting the following rushing lines in 4 healthy meetings:

You won’t catch me in a cash game without Henry. The $9,200 price tag seems cheap when you consider the numbers: 5 straight 100-yard rushing games, 3 games of 3 TDs and 20+ carries in 5 straight. Henry is averaging a massive 30.9 DK points per game.

Now he gets arguably the worst run defense in the league. The Chiefs rank 31st in Football Outsiders’ run defense DVOA and 32nd in Pro Football Focus’ run defense grades. Our Week 7 projections have Henry for 8.4 more DK points than any other RB.

Henderson is getting RB1 usage. In 4 healthy games, he’s played 82% of the Rams’ offensive snaps and run a route on 74% of pass plays. Henderson has averaged 17 carries and 2.8 targets across those games. And he’s scored 15.7+ DK points in all 4 of them.

Henderson is in a dream spot on Sunday as a 16-point home favorite with a 33-point implied total vs. the Lions. Detroit ranks dead last in adjusted fantasy points allowed to RBs.

To be perfectly honest, I’m getting sick of writing about Swift in this space. He scored another 17.7 DK points last week … and his price went down $300.

Swift garnered another 7 targets last week, giving him 5+ in every game this season. Among RBs, only Najee Harris has more total targets. Expect another busy outing for Swift in the passing game on Sunday with the Lions 16-point underdogs at the Rams.

We’ll see if WR Antonio Brown (ankle) is able to suit up this weekend. Godwin is a smash play if Brown is out. But he’s a cash-game value even if Brown plays.

Godwin has been a bit disappointing relative to expectations so far -- largely because of how big a role Brown has played. That has Godwin’s price down to its lowest mark of the season.

Godwin still ranks 19th among WRs in Expected Fantasy points and 21st in actual PPR points. His primary matchup on Sunday vs. the Bears will be slot CB Xavier Crawford, a 2019 6th-round pick.

We need to save some money if we’re going to pay up at QB and play Derrick Henry. We can do that at our 2nd and 3rd WR spots.

Mooney has been hurt by Chicago’s abnormally low passing volume. QB Justin Fields has averaged just 21 passes across his 4 starts.

That’s masked the fact that Mooney has seen a big 29% target share from Fields. That’s exciting with the passing volume likely to be way up vs. the Bucs on Sunday. If Fields chucks it, say, 35 times and Mooney maintains that target share, we’re talking about 10 targets.

Bateman saw encouraging usage in his debut last week: a 65% snap rate, 67% route rate and 22% target share. His role should only grow from there, especially with WR Sammy Watkins out again this weekend.

There’s nothing scary about this matchup vs. the Bengals, who rank 22nd in adjusted fantasy points allowed to WRs.

Back to the well with RSJ, who delivered 15.8 DK points for us last week. His price climbed $700, but he still checks in as the top dollars-per-point value at the position.

Seals-Jones got strong usage again last week: a 100% snap rate, 93% route rate and 15% target share. He gets a Packers defense on Sunday that sits 26th in Football Outsiders’ TE coverage rankings and 29th in adjusted fantasy points allowed to the position.

I rarely recommend a DST this expensive for cash games. We also rarely get our top-ranked DST for just $3,100.

The Cardinals are 17.5-point home favorites for Davis Mills’ Texans, who sport a week-low 14.75-point implied total. In Mills’ 4 starts, Houston has allowed 12 sacks and turned it over 9 times.