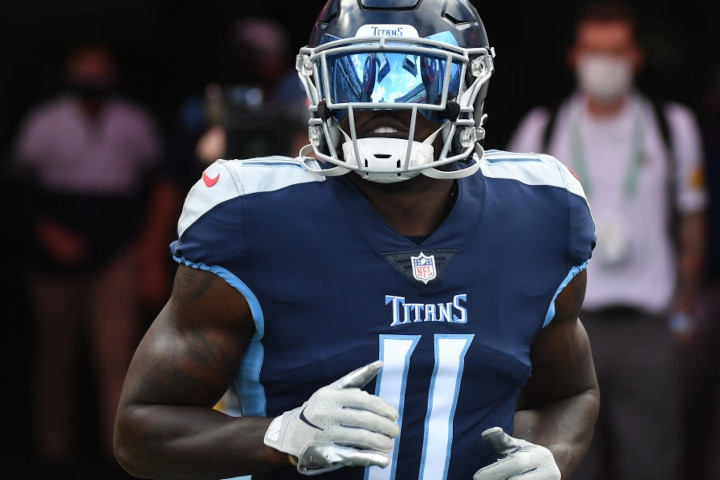 6 teams on a bye week this week, leaving only 10 games on the main slate. Ownership will be more condensed, which means the value will be even more difficult to find.

The Titans defense is currently allowing the most adjusted fantasy points to QBs. Both Tyreek Hill and Travis Kelce have top 5 matchup advantages at their positions, according to PFF.

Thankfully we have plenty of high-priced QBs on this slate that will dilute the ownership of everyone involved. Rodgers piques my interest as a strong GPP play primarily due to Washington allowing the highest FanDuel points per game to QBs. Additionally, the Washington defense has been passed on at the 3rd highest rate in neutral game scripts, so volume shouldn’t be an issue as it was last week for Rodgers.

With Mahomes, Stafford, Murray, Rodgers and Jackson all priced similarly to Brady, his ownership will likely be suppressed. Additionally, Brady provides a leverage opportunity away from the chalky Leonard Fournette.

Brady has thrown over 35 passes in every game this season and over 40 in 5 of 6 games. The Buccaneers offense has a 54.5% passing DVOA against the Bears passing defense this week, the 4th highest on the main slate behind the Rams, Chiefs & Packers.

Darnold is at a price point on FanDuel that makes him intriguing as a differentiator in large-field tournaments like the Sunday Million. For less than $400 salary more, you can spend up for Brady, Rodgers or Stafford, which will leave Darnold super low owned, especially coming off of two bad games in a row.

Darnold faced two of the top 12 defenses in DVOA in consecutive weeks.We’ve seen Darnold’s ceiling in easy matchups. The Giants currently rank 22nd in pass defense DVOA, 6th in adjusted fantasy points allowed to QBs, and this game is currently the 3rd fastest-paced game of the main slate.

Don’t fade Derrick Henry ($11,000) completely. But if you want to diversify a few lineups, here are some other plays.

Expected to be highly owned but for good reason. In the three games unaffected by injury this season (Weeks 1,4 and 6), Henderson is averaging an 89% snap share, 20 opportunities per game (17 carries, 3 targets), and a TD per game. Being a workhorse back for a top 5 offense will always put Henderson in play. This week he gets a Lions defense allowing the most adjusted fantasy points to RBs.

100% of the two-minute drill snaps

He didn’t get the CEH role … he got a better one.

The Panthers are a stout run defense, giving up the single fewest adjusted fantasy points to RBs. But Booker’s ownership should be lower due to this and he showed in two weeks without Saquon Barkley that he is an every-down workhorse, playing an 80% snap share over the last two weeks and handling over 70% of the rush attempts and 64% of the routes. This game script should also be much more favorable than last weeks’ onslaught by the Rams.

Paying up at WR will be tough this week without fading Derrick Henry. If you go this route, both Adams and Hill present massive ceilings against bottom 5 pass defenses.And if they hit big, it could disqualify the Derrick Henry teams from high finishes.

During Weeks 1-4, Ridley averaged 10.5 targets per game and hogged nearly 50% of the Falcons air yards. With a new coach and scheme, the Falcons have turned a corner as an offense, increasing pass offense DVOA with each week of the season. Ridley faces a pass defense that has allowed top 3 FanDuel fantasy points on the season to WRs and has seen Marvin Jones, Mike Evans and Antonio Brown decimate them in recent weeks.

Despite dealing with a stomach illness Monday night, Brown commanded a 31% share of the Titans targets. He’s commanded 23%, 22.5%, and 31% of the Titans' targets in the three games unaffected by his hamstring injury this season. This game has the highest over/under on the slate at 57.5 and Brown is due for a big game.

The Bears have stuck with the run game as much as possible, averaging an abysmal 21 pass attempts per game since Justin Fields took over the starting job. Offenses average 42 pass attempts per game against the Bucs as they rank top 5 in rush defense DVOA only allowing a league-low 54.8 rushing yards per game. Robinson has commanded a 26% target share this season. The pass attempts just haven’t been there.But they should be this week.

He continues to see high-end usage in terms of pass routes run and target share. Hockenson and the Lions will be presented with yet another pass-friendly game script with the Rams running up the score on the opposing side of the field. Hockenson also presents a good run back for a Rams stack.

Higbee ran a season-high 86% of the routes for the Rams offense last week and has seen a 15%+ target share in 2 of his last 3 games. The Rams currently have the biggest mismatch on the slate with a 74.8% combined DVOA advantage of their offense against the Lions' defense.

A rookie QB against a team that stops the run better than anyone should be a recipe for fantasy points. Fields has also taken more sacks than any QB over the last 4 games with 16.

The Bengals defense has been effective this year, ranking top 10 in both pass defense DVOA and run defense DVOA. They have yet to allow more than 25 points this season and currently rank 4th in points allowed.