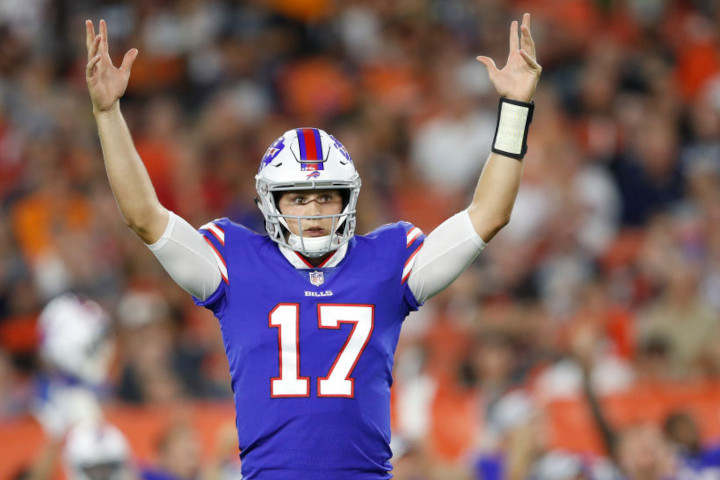 We’re paying all the way up for Allen in a smash spot. He comes off a bye week for a home game against a Dolphins team he’s owned. In 7 career meetings vs. the division rival, Allen has averaged 8.2 yards per pass attempt with 19 TDs. He’s added 54 rushing yards and .4 TDs per game.

As a bonus, this projects as the fastest-paced game on the week, with the Bills and Dolphins both ranking top 13 in situation-neutral pace. Expect plenty of volume and fantasy points from Allen.

Since a slow start in a tough Week 1 matchup vs. the Bills, Harris has ripped off 5 straight games of 19+ DK points -- and 4 straight of 21+. He’s averaged 17.2 carries and 8.6 targets over his last 5 games. Harris leads all RBs in expected PPR points per game, ahead of even Derrick Henry.

Sunday’s matchup isn’t ideal vs. a Browns squad sitting 3rd in Football Outsiders’ run defense DVOA and 8th in adjusted fantasy points allowed to RBs. But Harris is underpriced for the workhorse usage he’s been getting.

I’m still not sure how Henderson busted vs. Detroit last week. The usage was certainly there: An 88% snap rate, 15 carries and 6 targets. But he managed just 9.4 DK points. It was his 1st game all season with fewer than 15.7 DK points.

The good news is his price is down $100 this week for another dream spot vs. the Texans’ 30th-ranked run defense in Football Outsiders DVOA. Henderson’s Rams are 14.5-point home favorites with a big 31.25-point implied total -- 2nd highest on the week.

But he should be busy in the passing game. Gainwell is already averaging 4.4 targets per game, including 7 last week. Sanders leaves behind 3.8 targets across his 6 healthy games.

Godwin came through for us last week with a big 8-111-1 line and 28.1 DK points. He’s now totaled 18 targets in 2 games without Antonio Brown this season and should be busy again this weekend.

On top of Brown being out, Mike Evans is expected to get shadow coverage from Saints CB Marshon Lattimore. Evans has struggled in that matchup, averaging just 28 yards over their last 5 meetings. So look for Godwin to be the focal point of Tampa’s passing game on Sunday.

Pittman has totaled only 7 targets over the past 2 weeks. But that was in a blowout win over the Texans and a sloppy game vs. the 49ers. In the 4 games before that, Pittman racked up 7, 8, 12 and 12 targets.

That first 12-target game came vs. the Titans. Pittman should be busy again in the rematch, with the game sporting a big 51-point over/under. Tennessee ranks 31st in adjusted fantasy points allowed to WRs.

Higgins’ fantasy production has underwhelmed so far. But the usage has been there. He’s averaging 8.6 targets per game and ranks 26th among WRs in expected fantasy points per game.

This is a talented player who will start turning that opportunity into production. There’s a good chance that starts this week in a plus matchup vs. a Jets defense that Football Outsiders ranks 28th against the pass.

Seals-Jones’ ranks among TEs over the past 3 weeks:

He remains far too cheap playing the Logan Thomas role in Washington’s offense.

Seals-Jones gets a Broncos defense on Sunday that Football Outsiders ranks 19th in TE coverage.

Like the Cardinals last week (who came through for us with 11 DK points), the Bills are a relatively expensive defense worth paying up for.

The Bills D has been awesome in real life and fantasy this season. They’re averaging a slate-high 12.0 DK points per game. That includes a big 22-point outing in Miami in Week 2.

Back at home for the rematch this weekend, the Bills are 14-point favorites with the Dolphins sporting a 17.5-point implied total -- 3rd lowest on the week. Miami has allowed the 7th most DK points to opposing DSTs.