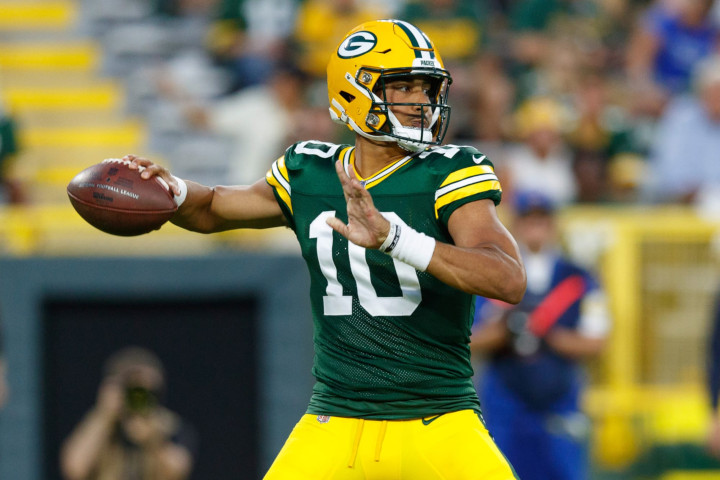 It’s a Stars and Scrubs week. And we start with a Scrub.

We don’t know how good a QB Love is yet. He had an inconsistent college career and has generally struggled in Packers practices by most accounts. But Love also looked pretty good this preseason, completing 69% of his passes and averaging 7.7 yards per attempt.

We’re playing him for 3 reasons:

Kamara has tallied 23+ opportunities (carries + targets) in 6 of 7 games this season. He ranks 3rd among RBs in carries per game and 5th in targets per game. Only Najee Harris and Derrick Henry have averaged more expected PPR points per game.

Kamara has turned that volume into production, averaging 20.5 DK points per game. He’s dipped below 15 points just once.

The change in QB to Taysom Hill adds some risk to Kamara’s profile. It could mean fewer targets and fewer goal-line chances for Kamara.

Ekeler’s usage has been nearly as valuable as Kamara’s. He ranks 23rd among RBs in carries per game but 3rd in targets and 9th in expected PPR points. He’s topped 22 DK points in 5 of 7 games.

I especially like Ekeler in Sunday’s matchup with a Philly defense that’s willing to give up short completions. The Eagles rank dead last in completion rate allowed and have coughed up the 3rd most catches and 8th most receiving yards to RBs.

Expect a busy and productive day in the passing game for Ekeler.

Zeke has disappointed in Week 1 vs. a stout Bucs run defense and in Week 8 without QB Dak Prescott. He’s topped 17 DK points in his other 5 outings, including 3 games of 23+ points.

Elliott gets Prescott back on Sunday and isn’t facing the Bucs. He draws a Denver squad that ranks 27th in Football Outsiders run defense DVOA and just traded away Von Miller.

The Cowboys are 10-point home favorites with a 29.75-point implied total -- 2nd highest on the main slate.

Why use Love? So we can get 3 stud RBs AND Hill.

He’s underpriced at $7,900 -- his cheapest DraftKings salary of the season. We know Hill has week-winning upside. But he’s also emerged as a high-floor play thanks to massive volume. Hill has seen 12+ targets in 5 of 8 games and dipped below 9 targets just once. His 90 total targets are tied with Cooper Kupp for the league lead.

Higgins remains far too cheap for the usage he’s getting. He’s actually matched WR Ja’Marr Chase with a 24.5% target share over the past 4 weeks. Higgins ranks 24th among WRs during that span with 14.7 expected PPR points per game.

He gets a pass-funnel Browns defense on Sunday that ranks 3rd against the run but 25th vs. the pass, according to Football Outsiders DVOA. Cleveland sits 22nd in DK points allowed to WRs.

Keep an eye on WR Sammy Watkins, who returned to a limited practice on Thursday. If he’s able to play this weekend, we might pivot off Bateman.

But if Watkins remains out, Bateman is a strong play at this price tag. He opened his career with a pair of 6-target games, despite modest 67% and 65% routes rates. Impressive for a rookie who missed about 2 months after core-muscle surgery.

Now coming off a bye, Bateman’s playing time could spike. He draws a Vikings defense on Sunday that ranks 27th in adjusted fantasy points allowed to WRs.

Here’s the other spot we’ll save a bunch of money -- assuming TE Noah Fant misses Sunday’s game on the COVID list.

The cherry on top: Okwuegbunam draws a Cowboys defense this weekend that Football Outsiders ranks dead last in TE coverage.

Carolina’s offense is in a tailspin. But the defense has remained strong. The Panthers rank 8th in Football Outsiders DVOA and 9th in Pro Football Focus’ defense grades. They sit 8th among main-slate DSTs in DK points per game.

Carolina is at home on Sunday for a Patriots team that ranks 21st in DK points allowed to DSTs and 22nd in adjusted fantasy points allowed.