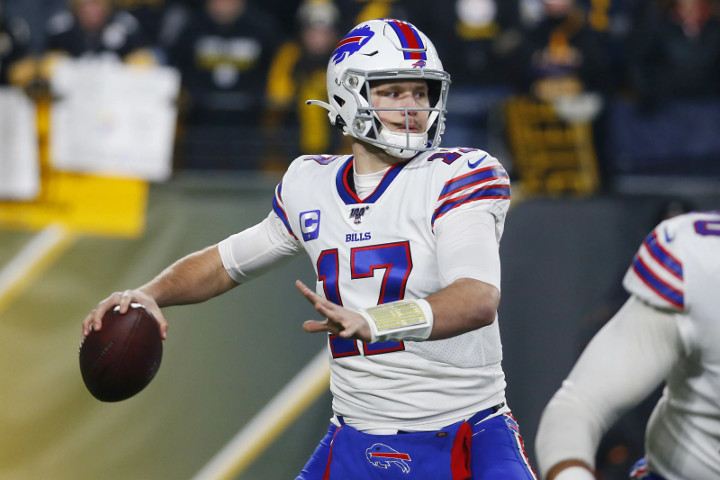 Priced as the QB5 on FanDuel, Allen is due for an eruption game. He’s struggled in his past 4 from a fantasy standpoint, failing to eclipse 18.32 points.

Allen only had 18 attempts last week against the Patriots in a windy, wet game but should be asked to do much more against the high-flying Seahawks. Seattle is 31st against the pass and has faced the most pass attempts in the league.

Seattle has given up a top 12 QB in 6 of 7 games — and there is no reason to believe they will be able to slow down Allen, who was the overall fantasy QB1 through the first 4 weeks of the season.

Allen is 2nd in our dollars-per-point rankings with a projected ceiling of 25.9. He currently has a FanShare projected ownership under 3% which would make Allen my favorite GPP play of the week.

In another division matchup, Cook should have a field day going up against the Lions’ 21st ranked rush defense that’s given up 12 rushing TDs in just 7 games.

In 2 meetings last season, Cook had 224 scrimmage yards and 2 TDs against this same defense. Further enhancing the outlook for Cook is that Matthew Stafford is on the COVID list, so the Vikings should dominate time of possession and have positive game script.

Cook ranks 2nd in dollars per point and is projected for relatively low ownership at just 10.3%.

Assuming Kenyan Drake misses Week 9, Edmonds will be a great value play. He’s priced as the RB13 on FanDuel compared to the RB6 on DraftKings.

Edmonds is 5th in dollars per point with a projected ceiling of 19.1 in a great matchup against the Dolphins’ 32nd ranked rush defense.

If Drake is out, I’d expect Edmonds to be the workhorse and play over 80% of the snaps, which would lock him in as one of my favorite GPP plays of the week.

Diggs has been a model of consistency with his new team, eclipsing 86 yards or scoring a TD in every game this season besides Week 7 against the Jets.

Diggs is priced as the WR7 on FanDuel but has easy top 5 upside at the position in a dream matchup against the Seahawks with a Vegas over/under at 55 points.

Diggs dominates the target market share in Buffalo as his 79 targets are almost 30 more than the next highest Bill (Cole Beasley has 51).

In a projected high-scoring game, I will be rostering Diggs in at least 35% of my FD GPP lineups as I expect him to eclipse 100 yards in Week 9.

I expect Lockett to bounce back in a big way as Buffalo has struggled to guard the slot position and teammate D.K. Metcalf may be tangled up with stud CB Tre White.

Lockett ranks 5th in dollars per point and has a high projected ownership of over 20%. But at an affordable cost, I will aggressively be playing Lockett in around half of my GPP lineups.

Ebron was solid last week against the Ravens with a 4-48-1 line, finishing as a top 10 TE on the week.

Now he gets a better matchup against the pathetic Cowboys — a game in which the Steelers are favored by 2 TDs.

With Pittsburgh projected to destroy Dallas, that enhances the chance of an Ebron TD, so I will be looking roster him in at least 15% of my GPP lineups.

Priced as the top defense — but at just $5K — I will be making the Steelers D a priority in my FD lineups.

The Steelers should be over $1,000 more than any other defense based on the fact that they generate the most pressure in the league and are playing against a terrible Cowboys offensive line and a 3rd or 4th string QB.

The Steelers have been a monster defense all season with 30 sacks in just 7 games and multiple INTs in 4 of them.

Pittsburgh ranks 2nd in dollars per point and will certainly be my highest owned defense on the Week 9 slate.