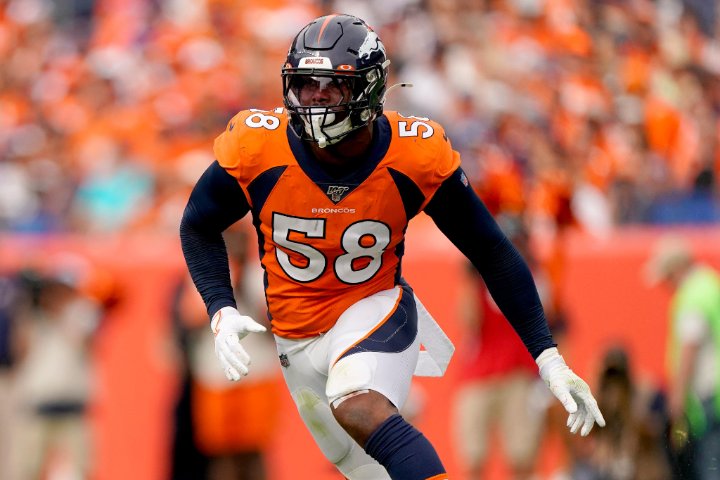 The Von Miller trade was the big defensive news this week, sending reverberations through 2 teams.

Let’s start with Miller. He leaves a crumbling defense in which just 1 other player (OLB Malik Reed) has more than 2.5 sacks this season. He joins a Rams defense that ranks 6th in the league in sack rate -- before adding Miller. Either Aaron Donald or Leonard Floyd would lead the Broncos in sacks and QB hits for the year.

So Miller steps into what should be his best situation in years. We might have to wait a week to see its effect on his production, though. The ankle injury that knocked Miller out of Week 7 early and kept him out of last week’s game is rendering him a game-time decision for this Sunday night.

Once he’s ready, expect Miller to build on the 4.5 sacks he has generated through 7 outings so far this year. His arrival can only be good for the outlooks of Donald and Floyd as well.

The Rams’ D does face 1 other issue, though. NT Sebastian Joseph-Day aggravated his chest-muscle injury in Thursday’s practice and needs surgery. HC Sean McVay told the team website that he didn’t yet know whether Joseph-Day would be able to return this season. The team has already placed him on IR, and Joseph-Day looks droppable in IDP leagues.

Greg Gaines will fill in for him. Gaines reached 40% playing time just once through the 1st 7 games and never topped 43%. He did get the start last week in place of Joseph-Day, though, and played 69% of snaps. Gaines logged 4 tackles (all assists this time, vs. Houston) for the 2nd straight game and his 2nd half-sack of the year.

For deeper IDP leagues, Gaines is set up in a good place to collect some numbers. He steps in for a guy tied for 5th in total tackles among all D-linemen, despite missing Week 8. Gaines also already ranks 4th among Rams in total pressures on the year, according to Pro Football Focus. He’s 1 ahead of Joseph-Day on 77 fewer pass-rushing snaps, and just 2 behind EDGE Terrell Lewis on 33 fewer snaps. (That meh production from Lewis probably compelled the Rams to make the Miller move.)

Gaines gets an upside matchup this week against Tennessee. Among 40 centers who have played at least 100 snaps this season, Titans C Ben Jones ranks just 26th in PFF pass-blocking grade. He has fared better as a run-blocker, at least, checking in 10th.

Back in Denver, meanwhile, Malik Reed is questionable for Sunday’s game against the Cowboys -- and seems legitimately questionable after aggravating a hip injury in Thursday’s practice. He’s already filling in for Bradley Chubb, who has been out since Week 2 following ankle surgery. The team hopes to get him back for Week 12.

Jonathan Cooper is the current starter in Miller’s place. He delivered 3 QB hits in the Cleveland game Miller left early, but those are the only 3 of the season for the 7th-round rookie. Stephen Weatherly and Aaron Patrick sit behind Cooper and Reed on the depth chart.

EDGE Rashan Gary and DT Kenny Clark get a negative matchup for sack upside with the Chiefs this week, but each could be in for a boost in that category beyond Sunday.

Gary has just 3.5 sacks on the year but has logged the league’s 8th-most total pressures, according to PFF. His 15 QB hits also sit tied for 4th in the NFL. Clark sports just 3 official sacks, but PFF has him 4th among all interior linemen in pressures.

Beyond the K.C. meeting, a Week 10 home date with Seattle and Week 11 trip to Minnesota present sack upside. After a Week 13 bye, there will also be scoring upside to a fantasy schedule that closes with the Bears, Ravens, Browns and Vikings (Week 17).

Baltimore hasn’t been especially good as a sack matchup but has yielded the 4th most fantasy points per game to D-linemen so far.

DE Cameron Jordan is another guy who could be in for a sack boost. He already started his turnaround after going without a sack through 5 games. The veteran notched 1 in each of his past 2 contests. That included 1 last week against the Bucs, who have allowed only 12 total sacks through 8 games.

Jordan’s next 3 weeks -- against the Falcons, Titans and Eagles -- present scoring upside. He also closes the year with positive matchups against the Dolphins and Panthers.

And, really, Jordan has just been a player we trust for production basically throughout his career.

Similar to Jordan, Cowboys DE Randy Gregory isn’t necessarily a sneaky source for sacks because he tallied 3 over just his past 2 games. But he logged 11 total QB hits over his past 4 and has recently gotten healthier, so he could be in for a boost -- or at least a big game or 2.

This week’s clash with the Broncos presents just such an opportunity, especially with LT Garett Bolles out.

Let’s run through some key LB situations based on what happened in Week 8:

*** With Kenny Young traded to Denver, the Rams turned to rookie Ernest Jones as the ILB playing-time leader. He started and played 89% of snaps in the blowout win over Houston, leading the team with 9 tackles (7 solo) and adding a half-sack and an INT.

*** The Broncos, meanwhile, inserted Young into the starting lineup right away. But he played just 56% of snaps, trailing fellow new starter Baron Browning. The 3rd-round rookie -- who has been limited by injury this year -- played 68 of 70 snaps and tallied 8 tackles, including 1 for a loss. We’d bet on Browning continuing to play over Young, but we’ll certainly watch to confirm that. Justin Strnad lost his temporary starting gig to the new duo.

*** New Orleans increased the playing time for veteran LB Kwon Alexander in his 2nd game back from an IR stint for an elbow injury. He increased from 29% snap share to 44%, taking away from rookie Pete Werner. The 2nd-rounder has slipped from a season high of 99% in Week 5 to 71% and then 54% the past 2 games. The situation makes neither player usable in our IDP lineups.

*** LB Derrick Barnes led the Lions with 7 tackles (1 for loss) in the Week 8 loss to the Eagles. But he played just 37% of the snaps. That followed 31% playing time in Week 7, both down vs. the previous 2 weeks. Barring some big change coming out of their Week 9 bye, we should just expect the rookie to remain limited in his role this season. Barnes carries long-term intrigue for dynasty leagues, though. Dynasty IDP Rankings Decisions: Who Should You Keep?

It's decision time in dynasty fantasy football leagues. So let's dig into some actual conundrums you might be facing with your IDP roster ...