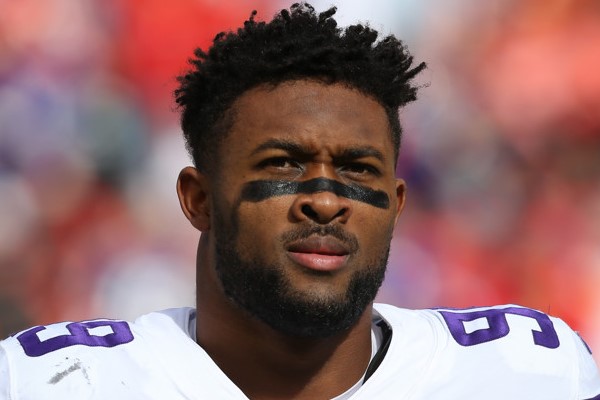 Hunter lost all of last season to a herniated disc in his neck that eventually required surgery. There have been no reported issues since that October repair, though. Hunter started camp on time. And he's wowing those near him.

"He's just bigger, stronger, faster, quicker and more skilled than 99 percent of the people out there," said RT Brian O'Neill, who has been facing Hunter directly in drills.

Coach Mike Zimmer says: "I wasn't really closely watching him, but I sure did notice him. "He's one of those guys that, the first time we went 1-on-1 pass rush, he was going against O'Neill, and it was amazing. So I heard O'Neill ask him, he said, 'Danielle, what was that move?' And he said, 'I don't know. It just happened.' He's just slithery and [has] long arms and [is] athletic. It's just different."

Stephen Weatherly played with Hunter through 2019, left in free agency and is now back. Here's what he has to say about his teammate: "D is still D. Freak. Definitely gets off the ball, his technique is great, especially in the pass rush. He looks just like how he did before I left, maybe a little bit better."

Now 6 years beyond arriving as a 3rd-round pick, he still won't turn 27 until the end of October. That means we might not have even seen Hunter's "prime" yet. He's an easy pick as a DL1 and should come at a discount vs. his historical production because of that year off.

Chris Tomasson of the St. Paul Pioneer Press reports that Vikings DE Danielle Hunter has received 2 recommendations that he sit out the rest of the season because of the herniated disc in his neck. The 1st opinion came after Hunter visited the Hospital for Special Surgery in New York last week. The 2nd comes from his personal trainer. We'll see what the player and team decide, but don't expect to have Hunter available for your IDP lineup anytime soon.

Hunter not expected back for Week 4

NFL Network's Tom Pelissero reports that Vikings DE Danielle Hunter isn't expected to be ready to play when he's eligible to return from IR next week. Hunter's dealing with a herniated disc in his neck and is reportedly "regaining strength and getting closer to returning." Pelissero adds that optimism is "still high that he's back this season." That's good, but it also falls short of telling us that Hunter will definitely be back this season. We'll keep an eye out for updates on his status. You might soon have a roster decision to make on Hunter if you can't keep him stashed in an IR slot.

The Vikings have placed DE Danielle Hunter on IR. By this year's altered rules, of course, that just means he'll miss at least 3 games. We'll see beyond that. The team has only ever called Hunter's injury a "tweak," but we're at almost a month that it has kept him off the field. ESPN's Courtney Cronin reports that it's "related to a neck injury he sustained," according to an anonymous source. If you drafted Hunter in an IDP league, you'll need to find a replacement for at least the 1st few games.

Hunter 'in doubt' for Sunday

NFL Network reports that Vikings DE Danielle Hunter's "status for Sunday is very much in doubt." Hunter hasn't practiced since Aug. 14 and remained off the field Wednesday, according to ESPN's Courtney Cronin. The team has been calling Hunter's issue minor all along and haven't revealed details, but this continued absence in the week leading up to the opener should obviously ramp up the worry. If he can't go, Minnesota would likely start Ifeadi Odenigbo at DE opposite Yannick Ngakoue.

What's up with Hunter?

Vikings DE Danielle Hunter hasn't practiced since Aug. 14, the team's official opening to camp. That's 10 straight missed practices for Hunter. According to multiple reports, HC Mike Zimmer has revealed only that Hunter is dealing with "a little tweak." Zimmer told ESPN's Courtney Cronin earlier this week that Hunter is "getting a little better every day" and that he'll return when head trainer Eric Sugarman deems the DE ready. The situation obviously adds some risk to the guy currently leading our DL rankings. But the lack of info makes it tough to tell just how much we need to worry. For now, we'd wait a little longer to draft Hunter than normal, though we're not pushing any other D-linemen ahead of him. If you'd rather pass on the uncertainty in your draft, of course, that's a reasonable path. We'll keep an eye out for Hunter's return.